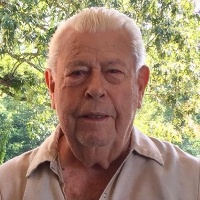 James Allen Weaver, age 88, of Blue Ridge, passed away on Monday, July 29, 2019. Born on October 16, 1930 in Gilmer County, he was the son of the late M.L. and Elzie Kirby Weaver. He was a member of the Blue Ridge Lodge #67 F&AM. He served in the United States Air Force during the Korean War and later worked as a Surveyor for the Georgia Department of Transportation. He is also preceded in death by his wife, Betty Jean Mosley Weaver; son, Joe Weaver; and siblings, Cecil Weaver, Max P. Weaver, Joe Weaver, Faye Townsend, Shirley Weaver, Jean Anklowitz, and Glenda Weaver.

Funeral services will be conducted on Saturday, August 3, 2019 at 2:00 PM from the Akins Funeral Home Chapel with Rev. Delmar Davenport officiating. Interment will follow in the Chastain Memorial Park Cemetery. Full military honors will be provided by the North Georgia Honor Guard. The family will visit with friends at the funeral home on Friday Evening from 5:00 pm until 9:00 p.m. Condolences may be sent to the family online at www.akinsfuneralhome.com. Akins Funeral Home of Blue Ridge is in charge of the arrangements.