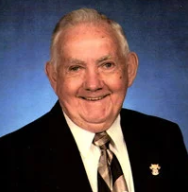 William Thomas ‘Tommy” Quintrell, age 90 of McCaysville, passed away Saturday, November 23, 2019, at Union County Nursing Home in Blairsville. Tommy was born September 29, 1929, in Fry, GA, to the late William Henry Quintrell and the late Willa Nell Fry Quintrell. He was a member of the 1947 graduating class of McCaysville High School, severed as a corporal in the US Army during the Korean Conflict; he had worked as a carpenter in the mining department at City Service Company. Tommy had served as mayor at one time and as a councilman for the City Of McCaysville for 30 years. He was an active member of the First Baptist Church of McCaysville/Copperhill, Tommy was preceded in death by brothers, Roy Quintrell, and John Quintrell, sister, Grace Postelle.

Arrangements entrusted to the Finch-Cochran Funeral Home of McCaysville, GA, you may send condolences to the family and sign the guest register at www.cochranfuneralhomes.com.