Blue Ridge, Ga. – “What I am going to do here, is I am going to set bond at $50,000,” Appalachian Judicial Circuit Superior Court Judge Brenda Weaver made her ruling and granted bond for Michael Chase Havard age 20 and Kevin Jack Chamaty age 20, both of whom have been charged in connection with the murder and Justin McKinney and assault of Anna Franklin.

The terms of the bond are strict with both men being required constant supervision and a host of stipulations that if not followed will result in immediate arrest.

The courtroom was packed in Pickens County as the two young men each had lawyers present their case for being allowed bond.

Appalachian Judicial Circuit District Attorney B. Alison Sosebee recounted the events that led to the arrest of Havard and Chamaty in a written statement given by Georgia Bureau of Investigation (GBI) Special Agent Jamie Abercrombie. 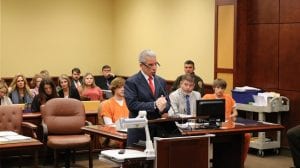 Defense Attorney Brian Steel presents the case for bond to be granted for his client Kevin Jack Chamaty.

According to Abercrombie both men knew of the conspiracy to murder and rob McKinney and aided in the act by providing gas and rides the night of the incident on Dec. 4, 2018 and also helped in disposing of one of the weapons used in the crime.

The GBI learned of the young men’s involvement after Havard voluntarily came forward and spoke with investigators about his knowledge and the roles that he and Chamaty played in the events surrounding the case.

Chris Hyde, Chamaty’s stepfather, was first to take the stand. Questioned by Defense Attorney Brian Steel, Hyde was firm in his belief that if granted bond Chamaty would return to court to face trial: “I believe 100 percent he would return, without hesitation.”

While Hyde is no longer married to Chamaty’s mother, Christy Hyde, Christy still resides in the home with Hyde and is currently serving 15 years probation for a methamphetamine and weapons charge in 2015. It was pointed out that Chamaty’s mother is serving under the First Time Offenders Act.

Patterson who has resided with Newman for approximately 5 years, spoke of his belief that Chamaty does not pose a threat to the community, and like Hyde was willing to “put up his wealth” as a guarantee.

Sosebee took the court off guard as she questioned Patterson: “Is this the same Ms. Newman (Chamaty’s grandmother) that was convicted in 1990 of voluntary manslaughter for the shooting death of her ex husband?”

“Yes ma’am it is,” Patterson replied to Sosebee’s question.

Chamaty, himself, does have a prior record with law enforcement, but the nature of his charges were never fully disclosed in court. Despite Chamaty having a family with a history of run ins with the law, many supporters were present for the young man.

The gallery stood to show their support of Chamaty and Havard.

After testimony from Hyde and Patterson, neither of whom have criminal backgrounds, Defense Attorney Steel turned to the courtroom gallery and asked those there to support Chamaty to please stand: “If you would do me a courtesy, if you would please stand in your place if you have come here today to support bond being granted for Mr. Chamaty.”

Approximately 30 people rose and remained standing as they testified their belief that Chamaty would in fact return to court and does not pose a threat to the community. Chamaty became visibly emotional during this phase.

“Nobody is in any way diminishing the loss of life for any person or living creature, but here we stand before the court in a position where Mr. Chamaty is cloaked with the presumption of innocence,” Steel concluded his case and pointed to the fact that Chamaty had followed a legal process in dealing with this case thus far and had voluntarily turned himself in.

Sosebee argued for the court to deny bond questioning why a 20 year old would be living with a 16 year old (Lakota Cloer : co-defendant in the case) and pointing to lack of accountability by the family prior to the incident.

“There are several juveniles in this court right now,” Sosebee said explaining that Chamaty’s pattern of behavior was likely not to change. “As a matter of fact we have the sister of Lakota Cloer who present in the gallery now, here in support of Mr. Chamaty. The connections, the continuation that Mr. Chamaty has with the witnesses in this case have not ceased.”

Sosebee added that while Chamaty had voluntarily turned himself, he had also “voluntarily facilitated the commission of those acts” in the crimes he is alleged to have participated in on Dec. 4.

Ultimately, Weaver granted bond set at $50,000. Along with this bond, Chamaty must be under constant supervision from Mr. Hyde including going to work.

“Mr. Hyde now has a shadow on him,” Weaver said of her ruling, “I am putting the burden on Mr. Hyde.”

Chamaty will be under house arrest and only allowed to leave with Mr. Hyde for work, church, medical or legal appointments. Chamaty will also be subjected to random drug testing in which he must call every morning to find out if he will be tested that day.

No contact with victims or co-defendants including co-defendant’s families will be allowed, and a curfew of 8 p.m. is set in place. Both Hyde and Patterson put up their personal property to insure the bond. 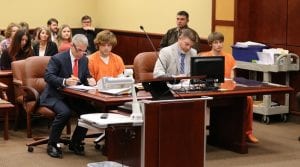 Havard and Chamaty sit with their attorneys awaiting Weaver’s decision to grant bond.

Havard’s terms of bond were very similar to the parameters set in place by Weaver for Chamaty’s bond.

Havard’s father, Chris Havard, spoke on his son’s behalf. He explained that his son had contacted him regarding the events that took place on Dec. 4 and that he had advised his son to go to the police in which Havard did almost immediately.

Havard, after speaking with investigators, then went to stay with his father who resides in Raleigh, Nc. According to Chris Havard, “I decided to pick him up and bring him to Raleigh.”

When the young man was informed of a warrant out for his arrest, Chris Havard made arrangements for his son to voluntarily turn himself in: “I personally drove him there (back to Fannin County).”

Havard’s father explained that while he would like for his son to return with him to North Carolina if granted bond, he understood that that might not be possible and had made arrangements for his son to live with his grandmother in Ellijay, Ga.

Diane Conway, Havard’s grandmother took the stand to confirm that she would take responsibility upon Havard’s release.

Conway admitted to being very upset by the events that have taken place but still would do anything to help her grandson: “I believe in him.”

Despite her belief in her grandson, she also has a firm belief in the law and when questioned whether she understood that if Havard violated any of the terms of the bond that he would be placed under custody she nodded and replied, “I would report him,” and added “He’s just going to have to go with me wherever I go. I have no problem with it.” 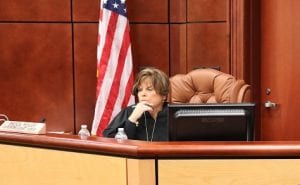 Judge Weaver expressed her thoughts on the responsibility of all involved in the case.

“If he’s to work, I don’t know how I would do that. I would just have to keep him at home with me,” Conway did express concern about being unable to supervise him on a job.

The court handed down the same stipulations of bond that were set forth for Chamaty with the exception that the bond could be amended if Havard gained employment and at a minimum would be required to where an electronic monitoring device while at work.

Both Conway and Chris Havard put up personal property to insure Havard’s bond. All insurances by both families will need to be approved by the Fannin County Sheriff’s Office prior to release.

The bond issued will also cover any further charges that might be handed down by a Grand Jury.

Judge Weaver shared her thoughts on the circumstances surrounding the McKinney murder case: “Frankly, I’m just not real happy with the parents or grandparents of any of these children. In every one of these defendants, these children were basically let go their entire life. Which we don’t do that as parents.”

“None of this should have ever occurred because somebody should have known where these kids were,” Weaver continued to address the court, “That’s not how you raise children. I think every bit of this could have been prevented if the parents were just exercising what they should be doing as parents to begin with, which is knowing where there children are on a school night at 1 o’clock in the morning.”

All suspects are expected to face a Grand Jury soon in Fannin County and move forward to trial.

You can read more about the McKinney Murder Case by following the links below: