Blue Ridge, Ga. – There was a noticeable absence at the preliminary hearing that was held regarding the death of Justin McKinney and the deadly assault of Anna Franklin.

In the courtroom were Blake Dickey (also known as Blake Dye), Hunter Hill, and attorney Bruce Harvey who spoke on behalf of his client Levi Manuel. All three boys have been accused in the shooting death of McKinney that took place on Dec. 4, 2018.

Not in the courtroom during this initial phase was the fourth juvenile accused in the case, Lakota Cloer, and while his attorney Charles Fulcher was present, unlike Harvey, he did not speak to his client’s absence.

After bond was denied in the case of accused shooter Blake Dickey, the courtroom cleared, and Lakota Cloer was brought in. Cloer’s family, along with family members of Justin McKinney, watched as Cloer plead guilty to lesser charges. Emotions were high on both sides.

Appalachian Judicial Circuit District Attorney B. Alison Sosebee spoke first, “We have reached a negotiated plea offer. This is a 3 count felony accusation.” 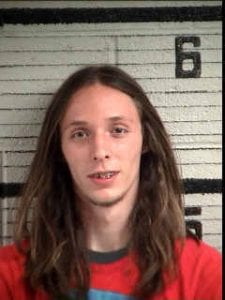 16 year old Lakota Cloer was arrested in Dec. 2018 for his role in the McKinney murder.

Sosebee explained that family members of the victims had been notified of this deal, and that there had been extensive discussions with defense attorney Fulcher.

The new charges that were agreed upon as part of this arrangement are:

1 Count Aggravated Assault : This charge is in relation to victim Justin McKinney. Cloer is being charged in aiding and abetting in this crime, as well as having knowledge of the crime.

1 County Robbery by Intimidation: This charge is in relation to the motive that ultimately ended in the death of McKinney and the serious injury of Franklin. As with the other charges this applies to Cloer since he engaged in discussion and planning of the crime. Along with aiding and abetting Cloer also admits to providing a gun to co-defendant Levi Manuel.

1 Count Aggravated Assault: This charge is in relation to victim Anna Franklin. Cloer admits guilt to intentionally aiding and abetting in this crime that involved the use of a deadly weapon.

By reaching a plea bargain, Cloer waived several rights including that to have a trial by jury and for his case to be seen in front of a grand jury.

It was revealed during this hearing that Cloer had previously been diagnosed with bipolar disorder and had been and is currently on medication to combat symptoms. Despite this diagnosis no competency or psychological testing was performed to evaluate Cloer’s state of mind.

Fulcher having spoke with his client, Cloer, on many occasions felt that he was competent to make decisions and said to the court: “I don’t have any concerns whatsoever about his competency. He understands the consequences of the decisions that he makes today.”

Appalachian Judicial District Chief Superior Court Judge Brenda Weaver asked Cloer a series of questions to satisfy the court of Cloer’s competency and to have a record of his replies.

Weaver also questioned Cloer’s mother, Amanda McGaha, about her feelings on her son’s mental state and if she felt Cloer understood what was happening in the courtroom. McGaha replied that she was confident that her son understood the proceedings now that he was on proper medication.

Cloer was able to reply clearly to each question asked by Judge Weaver which allowed the proceedings to move forward.

Weaver explained that sentencing for his plea would take place that day, but that a restitution hearing would be scheduled at a later date. A restitution hearing will determine what, if any, payments Cloer will have to pay to the victims for the harm caused by his wrongful acts.

After thoroughly explaining what a plea deal means and giving a detailed account of what rights Cloer would be waiving by pleading guilty and accepting the charges, Weaver asked Cloer, “Has anyone used any force, threat, pressure, or intimidation that caused you to enter this plea?”

Cloer replied, “No, you honor.” 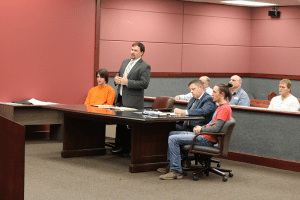 Cloer sets alongside accused Levi Manuel at a first appearance in Fannin County.

With that the sentence was handed down.

For the first Count of Aggravated Assault in relation to Justin McKinney, Cloer is sentence to 20 years having to serve 15 of those years in the Georgia State Prison System.

The second Count of Robbery by Intimidation will have Cloer serving 10 years in the Georgia Prison System. This sentence is to run concurrent with the sentencing from Count One.

Lastly, Cloer was sentenced to 20 years of probation for the Aggravated Assault of Anna Franklin. This sentence is to run consecutively with the sentencing from Count One.

According to this statement, at the time of McKinney’s murder the family was also dealing with the impending loss of one of McKinney’s nephews “who spent his last days on Earth mourning the loss of his uncle”.

Bignardi was left wondering why. Why the death of her son, why if he had done something wrong that the boys did not feel that he too deserved a fair trial as they were getting.

She noted 6 families were victims of this crime, and that by taking the life of her son, Justin McKinney, that the boys had also in a sense taken their own lives, and that all the families are left to mourn the future.

Bignardi pleaded that the boys be able to find programs while in prison to provide some sort of rehabilitation: “Our hope is that when these young men are released from prison they are not worse off than when they went in.”

After the emotional victim impact statement was read, Judge Weaver spoke to the court, “It is never easy to sentence young people.”

“This is a tragedy in every sense of the word,” Weaver went on and expressed hope that others will learn from this. Weaver stated that she hopes for youth to recognize and stay away from activities that can lead to criminal behavior, and that parents will be more involved in their children’s lives, knowing who they are with and knowing where they are.

Weaver concluded the hearing by saying, “My heart goes out to all of the individuals involved in this case.”

As court was recessed Cloer was allowed to briefly speak to his family. The group shared a very emotional goodbye before Cloer was escorted out of the Fannin County courtroom to begin his sentence for his part in the McKinney murder case.

You can read more about the McKinney Murder Case by following the links below: