Blue Ridge, Ga. – Only one of the four accused in the McKinney murder case sought bond after the preliminary hearing took place in a Fannin County Courtroom.

Appalachian Judicial Circuit Superior Court Judge Brenda Weaver presided over the case and as the preliminary hearing came to a close stated, “The Court does find that probable cause has been established.”

The State had met their burden of proof in establishing a case against the boys being charged with Malice Murder, Felony Murder, Aggravated Assault, and Aggravated Battery. Now the burden of proof fell upon the defense to satisfy reasoning for letting any of the boys out on bond.

Farnham argued that his client, Dickey, should be considered for release, and did in fact satisfy all the factors required by state law in Georgia for this consideration.

According to Farnham, Dickey had no prior convictions and had never been involved in anything violent in his life. If released Dickey did not pose a threat to the community and was not a risk for intimidation of any witnesses.

Lastly Farnham pointed out that both of Dickey’s parents reside in Fannin County and said, “”He’s not a flight risk, Judge. His entire family is here.” 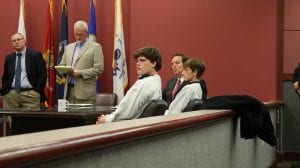 The Appalachian Judicial Circuit District Attorney, B. Alison Sosebee stepped in and presented her thoughts regarding the bonding of Dickey.

Sosebee pointed out that prior to the arrest Dickey was residing with the Hill family and added of the boys, “They were in an unsupervised environment, that clearly allows them to travel at will.”

While Farnham had stated his case for release, Sosebee argued that he had failed to present sufficient evidence backing his claims, which is required by Georgia law for cases of this nature: “there has been no evidence presented on behalf of the defendant in this case.”

After hearing both sides, Judge Weaver denied bond for Dickey agreeing that the burden of proof on the defense’s behalf had not been satisfied. Weaver added to this, “The issue of supervision has been in the Court’s mind during most of this hearing.”

Attorney Karen Shelley opted to not file a motion for a bond hearing at the time, leaving her client, accused 15 year old Hunter Hill to remain in a juvenile detention facility for the time being.

A third party in the group of juveniles accused, Levi Manuel, will have a preliminary hearing and possible bond hearing at a later date. This comes from Manuel recently switching his legal representation.

Attorney Bruce Harvey of Atlanta, Ga. will now represent Manuel in the McKinney murder trial. This move came as a surprise to the court and to Manuel’s previous council attorney Andrew Wehunt.

Judge Weaver noted that while she had received Harvey’s appearance filing that she did not see a withdraw from Wehunt, and thought that Wehunt might have been taken off guard by this move.

Harvey, the high profile Atlanta based attorney, has represented his fair share of clients in Manuel’s position and was already making moves in the courtroom as he asked for a delay in Manuel’s first appearance / bond hearing.

According to Harvey, Manuel’s previous council had filed a motion for a psychological and competency evaluation to find out if the boy was capable of standing trial. This evaluation was never completed and Harvey felt that moving forward without this information would not be in his or his client’s best interest.

Judge Weaver along with District Attorney Sosebee agreed to have this testing done and postpone the first appearance hearing. Manuel’s hearing has tentatively been moved to take place on Feb. 18, 2019.

You can read more on the McKinney Murder Case by following the links below: