Blue Ridge, Ga. – A call was made to cancel a very anticipated game last week between football rivals the  Fannin County Rebels and the Gilmer County Bobcats.

The decision was made over an individual’s possible exposure to and contraction of Covid-19.

Questions arose among Rebel fans and some parents reached out to FYN not satisfied with the explanation they had been given. All wanted to know what the Fannin County School District’s protocol is to make this decision and who ultimately decides.

Documentation provided by the Fannin County School System confirms that an individual with ties to the football team had come in contact with at least 2 persons who recently tested positive for Covid-19. This documentation goes on to say that the individual in question is “symptomatic”. 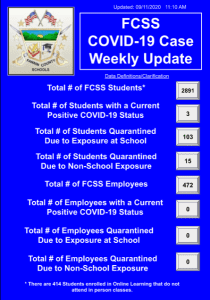 Sources tell FYN that while the individual was tested for Covid-19, no confirmation was ever received as to whether the person had tested positive.

Fannin County Director of Applied & Integrated Instruction, Lucas Roof, explained that due to medical privacy laws students are not required to produce any documentation to the school system that they have been tested and received a positive result for Covid-19.

When direct documentation is unavailable, Roof explained that verification comes in one of two ways. Either contact from the school system is made to the Georgia Department of Public Health (DPH) for confirmation on cases, or if DPH receives a case that they determine to be a possible student of Fannin County, they will contact the school system.

“It really is a two way street as far as communication,” Roof said of DPH and the school system’s relationship.

DPH also will treat cases as “considered positive” when indications lead to a strong likelihood of an individual having contracted the virus.

Due to medical privacy, the Fannin County School System could not confirm whether the individual relating to the football game had received a positive test result.

Assistant Superintendent of Personnel & Administration, Robert Ensley, explained that the school system, upon learning of the possibility of a positive case, contacted the local branch of the Georgia Department of Public Health (DPH) to seek recommendations.

DPH and Roof discussed the situation facing the Fannin County Rebels and based on information received, DPH gave guidelines to the school district.

While Roof has been tasked with the Covid-19 coordination of the district, the cancellation of the game came down to a school level decision.

After receiving guidelines from DPH, Fannin County High School Principal, Assistant Principal, Athletic Director and Coach met to go over options and concluded that with DPH recommendations it was in the best interest to cancel.

Roof confirmed the DPH recommendations on Thursday, Sept. 10 after questions arose from parents concerning the decision.

“Lucas, this email is to let you know that we consider the young man who is symptomatic and is an epidemiological link to 2 cases to be a case of COVId-19 and that all of his contacts on the football team should be quarantined. Please contact me if you have any questions.”

Confirmation received from DPH of guidelines relating to the athletics Covid-19 case.

The school system was also unable, due to privacy laws, to confirm with FYN if any players had to be quarantined after coming in contact with this particular case. Several parents of athletes, however, spoke with FYN and did confirm that their child had been sent home and would not be able to return to school until Thursday, Sept. 17.

Numbers on the school system’s website, updated every Friday morning, did show a significant rise in the number of students quarantined as of Sept. 11.

“These decisions are never made lightly,” Fannin County Superintendent Dr. Michael Gwatney stated and added, “Our team is making the best possible decisions based on the information we have and the recommendations we receive.”

Gwatney confirmed that the protocol that was followed concerning the Fannin-Gilmer game would be the same for any future school related events, not just limited to athletics. The school system will seek the advice of medical professionals and follow the recommendations given at the time.

Gwatney explained that guidelines given to the district are fluid as more becomes known about the virus, “Covid-19 is information ever evolving and we have to work with the latest details when situations arise. The well being of our students and our community as a whole is always a top priority.”