Blue Ridge, Ga. – Will Fannin County finally have its stand alone library that so many citizens have petitioned for in the past? No, but the possibility of moving the current library to a larger more accommodating space is something that all agreed would be a vast improvement over the library’s current situation.

“The purchase of the Whitepath building and moving the Administrative offices out of the courthouse fulfills a mandated referendum that was approved by the voters in Nov. 2016,” Fannin County Chairman Stan Helton said explaining the purpose of the called meeting. 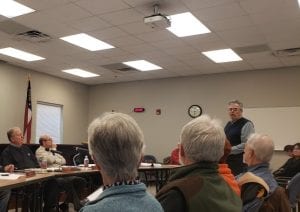 Helton added, “During the move, moving there and design, we have an opportunity to offer the library a better space with improved parking.”

The two boards took the time to open up dialogue and lay the groundwork for the library’s possible move.

Peter Sutton with Sutton Architectural Services was also present to help work through concerns and share his thoughts on the redesign of the Whitepath building.

Sutton pointed out that the buildings structure, upon initial inspection, was in good standing and that the process would really be one of converting the building from it’s industrial function to a building of administrative function.

Interim Regional Library Director for Mountain Regional Library System, Claudia Gibson spoke on the current library, “From what I’ve seen. I do think the library is very inadequate for library services. It’s very small. The parking, as you all know I’m sure, is very bad. We worry about children. They have to cross the street.”

The size of the new library was a key topic of discussion among library board members. The current square footage of the Fannin County Library is approximately 6,800 square feet.

Fannin County Public Library board member Ron Bolin stated that according to state standards the new library would need at least 19,000 square feet. Bolin added, “For me it is critical that we meet state standards.”

State standards of square footage for a library is based upon projected population growth and while Fannin County would ideally like to see 19,000 square feet for the new library, it is possible that the new facility could start out with less footage and be expanded at a later date.

Bolin also brought to the forefront the issue of funding, stating that not only is the grant from the state for $1.3 million not a done deal, but also that it was his understanding that the county was running on deficit in 2020 and wondered where the county’s portion of funds would come from.

The library board members all expressed that Speaker of the Georgia House Representatives David Ralston’s announcement of the grant had taken them off guard, and pointed out that the grant is still up in the air.

Regardless of the question of funding, both parties agreed to take care of due diligence in order to give the county the best possible chance of receiving state grant. Members of the Board of Commissioners and the two boards representing the library system expressed enthusiasm in moving forward with the project.

Post One Commissioner Earl Johnson conveyed what seemed to be a mutual feeling of everyone involved, “I think it’s a very good avenue for all of us combined.”

The boards will meet at a later date to go over findings with state standards and discuss design and needs.