For the first football game of the season, one of the oldest high school rivalries squared off Friday night at the Huff-Mosely Stadium in Ellijay, Georgia. Fannin County Rebels versus the Gilmer County Bobcats. The Rebels beat the Bobcats 28-0.

Rebels elected to receive the ball first, Cohutta Hyde, ran the ball down field into Bobcat territory and got 1st down at the 30-yard line. Unfortunately, though, due to errors, turnovers, and fumbles, neither the Rebels or the Bobcats had a great first quarter and the score ended 0-0.

Once the second quarter started, it was apparent that the Rebels had settled in and shaken off some ‘first-game of the season’ jitters.

At 8:38 in the second quarter, Rebels lit up the scoreboard and gained their first touchdown of the game. Quarterback, Luke Holloway, had a nice hand-off to running back, Treylyn Owensby, and he got a rushing touchdown. Afterwards, the play was flagged for un-sportsman-like conduct due to Fannin’s early celebration. Kicker, Sara Sosebee, with the extra point gave the Rebels the full 7 points to Bobcats 0. 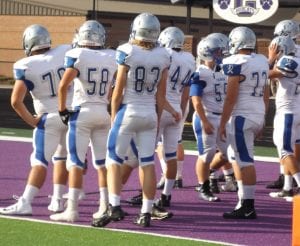 Late in the second quarter, Rebels defense forced the Bobcats to punt. Rebels, defensive back, Hyde, caught the ball and had what was hopefully a 60-yard return by getting the ball into Bobcat territory, but there were two blocks in the back, so the Rebels were forced back to the 40-yard line, which decimated a strong return.

The first half ended with the Rebels up by 7, but it was obvious that both teams needed huddles with their coaches; Coach Cheatham and Coach Wingard, to make changes and help improve plays.

After half-time, it was clear to see the Rebels made some adjustments. The Rebels had a much better performance with their hand-offs and executing their passes. Rebels brought in some more touchdowns and points after with Sosebee.

With 7 minutes left in the 3rd quarter, Rebels quarterback, Holloway, rushed for a touchdown and Sosebee brought in the extra point.

Gilmer’s Bobcats fumbled in third quarter, Owensby picked up the fumble and ran it to the Bobcats territory on the 34-yard line before getting tackled.

Early in the fourth quarter, Rebels defense played harder than ever as they continued to keep the Bobcats from scoring.

While Bobcats had possession, Rebels defensive linemen, Pierson Archer, got the fumble at the 3-yard line.

Rebels quarterback, Holloway, rushed the ball but got tackled at the 41-yard line.

Rebels running back, Owensby, ran in for a touchdown, but the play was flagged for holding on Fannin. 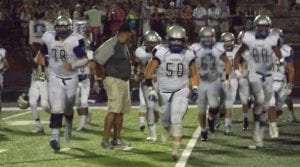 With 3:08 left in the game, Rebels’ Jalen Ingram, scored a touchdown. After kicking her third extra point of the night the night, Sosebee gave the Rebels 21.

Rebels defense in the fourth quarter stood strong as defensive back, Tate Heaton, took out a Bobcat at the 33-yard line.

Another great play by, Mason Rhodes, as he tackled a Bobcat at the 27-yard line.

With less than 3 minutes in the game, defensive back, Hyde, intercepts the ball from a Bobcat, and hauled it down field before getting tackled by a Bobcat at the 14-yard line.

Holloway passed off to Owensby and he ran for the touchdown gaining another 6 points for the Rebels. Sosebee, four and four for the night, gained the point and left the Rebels with 28 to Bobcats 0!

The takeaway from Friday night’s game is that the Rebels have a good football team. Coach Cheatham won his first high school football game as a head coach here at Fannin County High and as Rebel alum.

Come out to support the Fannin Rebels at their home game Friday, August 24th, against Lafayette High School at 7:30pm!