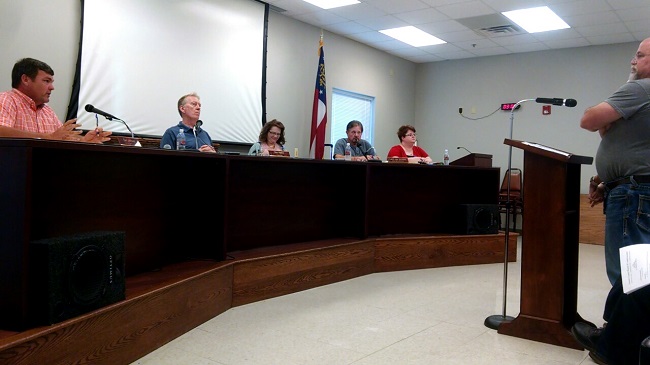 Blue Ridge, Ga. – There was no shortage of comments as citizens filled the public commentary portion at the Board of Commissioners (BOC) meeting to express their outrage over the recent handling of Chief Tax assessor Dawn Cochran.

After reading about the exchange between county commissioners and Cochran in local media, citizens of Fannin County spoke in defense of the Tax Assessors department.

Frank Moore of the Aska Road area was first to speak. Moore, an attorney, works on property tax appeals and has firsthand experience dealing with the Tax Assessors department and Cochran herself: “That is a very professional office.”

Appalled by the questioning of Cochran’s education by Fannin County Chairman Stan Helton, Moore expressed his opinion, “Whoever was asking that question makes me wonder where’s your MBA? Where’s their high degree of education that qualifies them to do anything?” 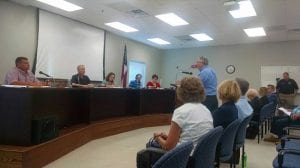 “And who’s the person that would actually put Angelina Powell on the Board of Assessors instead of that man right there?” Moore asked motioning to former BOA Chairman Lane Bishop.

At this point Helton put a stop to Moore’s questioning stating that Moore’s actions were boarding a personal attack, “We’re not here to criticize citizens like that. That’s out of line, so let’s move forward. Criticize me if you wish.”

“If anything I’m attacking the board for making that decision,” Moore replied to Helton, “I don’t know who made that decision, but it was a foolish decision.”

Others who spoke were just as angered as Moore over the questioning of Cochran’s education.

A former board member of the BOA, Sonia Smith, asked, “It’s not that you need an education to ask a question is it?” adding, “I believe her questions were educated. She wanted an answer to her question.”

Smith also stated that the commissioners’ behavior toward an employee could be very discouraging for other personnel who might now be intimidated to ask a question.

Sandra Daugherty of Sugarcreek agreed with Smith’s perceptions of the BOC possibly making it difficult for county employees to come to them with questions.

“To be clear everyone, I’m addressing you, Mr. Helton, and you, Mr. Johnson (Post 1 Commissioner), both as a human being and as a public official, you should both be ashamed of yourselves. Not only do you owe Dawn Cochran an apology, but you owe everyone sitting here that night an apology.”

Former BOA Chairman Lane Bishop was present to defend Cochran having worked with her for several years: “Dawn Cochran doesn’t have a formal degree as you so crudely pointed out, but she does have a PhD. It’s in honesty.”

“Maybe it’s time for the voters of Fannin County to consider a recall petition on you,” Bishop concluded his time, “a class action lawsuit and call the department of revenue on all three of our commissioners.”

Blue Ridge resident Ralph Garner reasoned, “Why tarnish the legacy of good that you (BOC) are doing with ugly behavior like that? A prolonged repetitious rant is out of order most any time.”

Marcella O’Steen of Epworth approached the matter on a more personal level stating that Dawn is someone’s mother, daughter and wife. O’Steen was unable to hold back anger as she stated of the situation: “If I were her (Cochran) husband, I would kick your a**!” 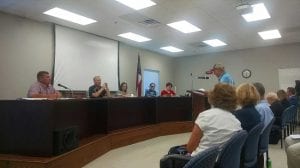 Sosebee who had previously complimented the Tax Assessors department during the June 12 meeting failed to take action making him just as guilty according to O’Steen: “Out of three men up here not one of you came to her defense.”

While people certainly expressed their outrage over the perceived treatment of Cochran, many were also displeased with the option that was presented of outsourcing some of the of the workload of the Tax Assessors office.

It was proposed at the June 12 BOC meeting to look into a contract with Georgia Mass Appraisal Solutions & Services (GMASS). In this contract, GMASS offers to appraise a third of the counties parcels each year for three years. This would keep the county in compliance with Georgia state standards.

The GMASS contract would cost taxpayers a total of $784,000 for three years of service. Chairman Helton pointed out that Fannin County’s total yearly budget for the Tax Assessors department is far more than surrounding counties, and this contract could be a way to alleviate some of the financial burden on the taxpayers of the county.

Helton clarified that he was not advocating to completely replace the tax assessors department: “You always need to have some local involvement and people there.”

“What they’re (tax assessors) not telling everyone, is they already are using this company(GMASS),” Johnson said of the proposed contract.

Chief Assessor Dawn Cochran did confirm that she had planned on asking for help in 2019 with approximately 13,000 parcels.

“No one voted to do it,” Johnson said explaining the proposed contract,”I’m all about saving the taxpayers money, but we’ve got a lot of research to do.”

“I have not had to raise the mileage. I didn’t get elected to look at the tax assessors. I got elected to save taxpayers money,” Johnson concluded his feeling about the public commentary.

Helton expressed a similar view to Johnson: “Fannin County taxpayers are contributing almost $1 million a year to fund our Tax assessors office. This is the highest budget in 10 Northeast Georgia counties, including Cherokee, NC. I think the citizens have a right to expect their Chairman to ask tough questions instead of worrying about my bedside manner.”