FANNIN COUNTY, Ga – Board of Commissioners voted unanimously to oppose the annexation of more property to the city of Blue Ridge, citing lack of knowledge about the proposed change.

The annexation request is currently at the Georgia General Assembly and has reportedly already passed in the House.

Chairman Stan Helton, Post One Earl Johnson, Post Two Glenn Patterson, and County Attorney Lynn Doss all confirmed that the city of Blue Ridge had not contacted them regarding the expansion.

“I have some concerns because of this expansion, from what I understand, they’re talking about expanding the city limits where it’s at right now Trail’s End, which is down the end toward McCaysville from Walmart, all the way to Gravely Gap. Also, from the Toccoa River near Tammen Park out near Forge Mill Road,” stated Helton.

The proposed annexation extends down Hwy. 515 and Hwy. 5.

Doss thought the annexation was in the early stages and not in the General Assembly because no one from the city or city attorney had contacted her about it.

“I think it’s offensive and insulting for this to occur, frankly without any information at all. It just doesn’t seem right,” declared Patterson.

The chairman also inquired if city ordinances would supplant the county’s existing regulations, such as noise, speed limits, alcohol, and law enforcement jurisdictions.

Regarding alcohol, he said, “This is a huge issue. We’ve not had any input into this, and more importantly, the people in the county have not had any input, so all of a sudden, if they start seeing alcohol in places that they’ve not seen before and they don’t get a chance to vote on it. That’s going to be a big problem.”

Johnson wanted to know if the city could ask to annex any property in the county. The answer is must be contiguous to existing annexed property, but otherwise, yes.

Post Two Patterson asked if the county attorney had ever encountered the city by-passing county input in annexation matters. She said it doesn’t happen often, but stressed the importance of county involvment with these matters.

Doss spoke to an annexation that occurred last year and confirmed that the city attorney sent over documents. Also, a notification about a change to the city charter ran in the paper. However, no one has contacted her about annexing property this year.

She also raised potential changes to LOST and county service delivery strategy if the annexation goes through. LOST distribution will come up for renegotiation in two years.

“One of the city’s arguments [during previous LOST negotiations] was their area and tourism and what they contributed to the pie. Well if they’re area is larger, they’re going to ask for a larger share of the pie. The pie hasn’t gotten any larger. So, they get a larger share of the pie, then do we have to come back and renegotiate the service delivery strategy because they got more money than the county does out of it, but the county still has to provide all the fire service,” explained Doss.

The expense might not come out of the county’s share either, but McCaysville as well. Morganton doesn’t qualify for a portion of LOST in part because of its size. However, if Blue Ridge continues to expand, then McCaysville could no longer qualify for a share of LOST.

“I don’t know how in the world we got to where we’re at not talking about anything,” said Johnson. “It’s very amazing to me that’s it even being talked about, and we’re having to make a decision right now where to oppose or not, and no representative had any input whatsoever.”

“I ask for a motion that we oppose this annexation and that we instruct Mrs. Doss to alert the powers that be at the Capitol that this is the official position of the board,” stated Helton, “I would much rather have a face to face meeting, an open meeting with their council to find out exactly what they’re talking about.”

The commissioners unanimously approved the motion. 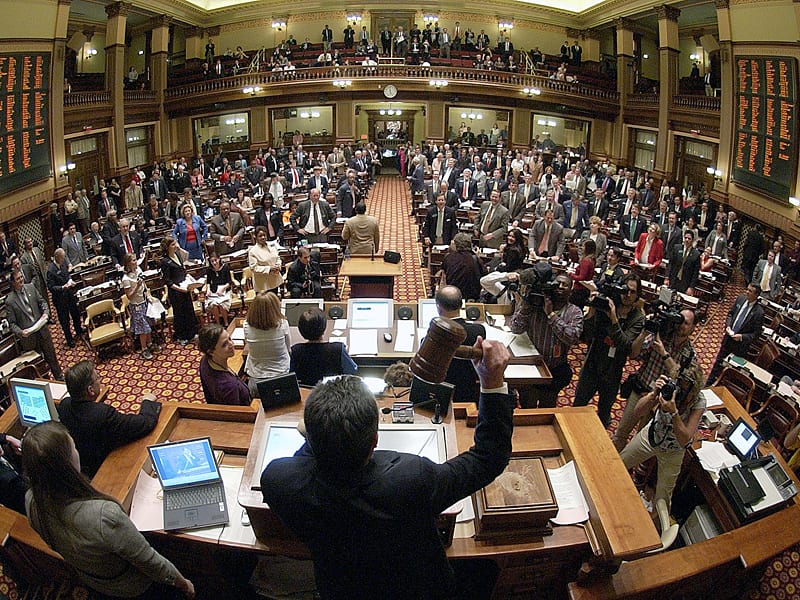 From the press release:

The Georgia General Assembly will suspend the 2020 legislative session indefinitely after Friday, March 13, the 29th Legislative Day. The suspension is out of an abundance of caution and in the interest of health and safety of members, staff and the public given the prevalence of the coronavirus. Lt. Governor Geoff Duncan and Speaker of the House David Ralston have mutually agreed to suspend the session and resume at a future date to be determined.

“We continue to urge calm and appropriate responses to the coronavirus situation. However, the current environment demands that we take additional preventative action,” said Lt. Governor Geoff Duncan. “Speaker Ralston and I are working diligently to ensure that, at the appropriate time, the General Assembly resumes its critically important work.”

“We do not take this action lightly, but after discussions with Governor Kemp, we feel this is a prudent measure which will ensure an orderly legislative session,” said Speaker David Ralston. “I appreciate very much the cooperation of Lt. Governor Duncan, and working together, our House and Senate stand ready to support the state’s response to the coronavirus. We look forward to resuming the legislative session and returning to the people’s business.”

The House and Senate will reconvene for the 30th Legislative Day at a future date and time to be set by Lt. Governor Duncan and Speaker Ralston under the terms of the joint adjournment resolution adopted by both chambers.

Earlier today, both the House and Senate adopted the Amended Fiscal Year 2020 state budget. That budget includes $100 million in funding to address any coronavirus-related needs which may arise.