Fannin County, Ga. – Hosted by the Fannin County Chamber and CVB, April’s Candidates forum saw more absentees than attendees on Monday, April 25, 2022. Less than half of the candidates running for office attended with the largest missing portion coming from the District 9 Representatives.

In the United States House of Representatives race for the 9th Congressional District, only Gregory Howard was able to attend the forum. Offering his three minute opening statement, Howard spoke on liberties and the assaults they have endured.

Howard stated, “I’ve been asked why do I want to be in congress and the very simple answer is this, to advance my work in restoring our lost freedoms and the God-given rights bestowed on behalf of the citizens in our U.S. Constitution.” 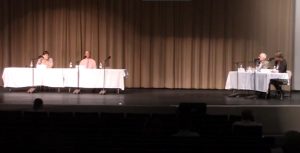 Candidates for the Fannin Board of Education, Bobby Bearden and Debi Holcomb speak at the candidates forum on April 25, 2022.

After his opening statement, the event did not move into forum, but instead moved on to the Board of Education’s contested seat. With Clarence “Junior” Farmer unable to attend due to spinal surgery, only Debi Holcomb and incumbent Bobby Bearden spoke in the forum.

Holcomb focused on state issues that the county is facing saying that she is ready and willing to take her shot to make a difference for families in the county and be more transparent while looking to oppose state oversight in the county level. Through her experience as a mom with kids in the schools, Holcomb said that she has attended meetings of the school board and has worked in county government before.

Holcomb also spoke on compensation for teachers and time off during COVID through stay-at-home orders and her feelings towards retaining teachers in the school and losing the experience of those long-time teachers. She stated, “One of the most important things that our students need is teachers who are happy to be here and are happy to be teaching them, teachers that care. Our teachers do care, but they are not getting what they need and it’s hard for them to get the students what they need.”

Bearden is the incumbent of the office. He said he is proud of Fannin County Schools and that the school system is doing very well in current times. Holding to his participation in the school board through their efforts and what he referred to as successes over the years. Bearden said he is for the children and the taxpayers as a board member and pointed to his record as proof of the board’s forward motion and cooperation with other government entities to provide for the citizens of the county.

The teachers became a topic discussed over several questions as Bearden replied in another question that Fannin never furloughed like other places. He said, “We’ve always paid our teachers 190 days if I’m not mistaken. As far as I know, we take care of our teachers.”

Moving into the Post 2 Commissioner’s race candidates, Glenn Patterson, Larry Joe Sosebee, and Anita L. Weaver were present for the forum. Greg Staffins was absent due to allergies and Larry Syputa was absent due to a car accident. All three candidates supported the idea for a community center with meeting space, which was the Post 2 Commissioners opening question. With all three agreeing, the only question on each candidate’s mind was how to fund it and where to put it?

Patterson is the incumbent in the office. He noted successes in the county and its growth under the current leadership saying that projects like the recent announcement of a standalone library were proof of continued efforts and cooperation among state and local entities. He spoke about service to the citizens and continuing to pursue things like those he already has in his current term including paying off the courthouse, maintaining roads and bridges, protecting gun rights through resolutions like the second amendment sanctuary, improving public safety services, and improving broadband service among others.

Patterson spoke on affordable housing as a tough topic. He stated that the county needs to tackle the issue as it is facing many surrounding counties as well. He noted some hesitation in taking grants and state funds due to strings attached with many of those options. He said the county is already looking at ordinances and are working towards a type of solution. He spoke about town hall meetings and incorporating ideas from citizens on the issue. He said the topic is very difficult as he wants to support those people living here that are builders and that is how they make a living while also supporting citizens on the other side who view the continuing developments as a negative. He said he could see it both ways.

Sosebee was the Post 2 Commissioner in Fannin from 2010 to 2018. He also spoke on projects he was a part of saying that he would continue to work for Fannin County as it is dear to his heart. Increasing economic growth through new commercial businesses and jobs alongside financial responsibility through refinancing the courthouse were two examples he gave.

Touching on the topic of affordable housing, Sosebee noted the topic gains extra stress from rising costs of lumber and other building materials. He later added that despite the costs, he definitely believes the county has a problem with overdevelopment. Addressing the issue is a process as Sosebee said one option to help in controlling growth could involve a moratorium on the building of major subdivisions in some way. He noted that the need was present and a long term solution could likely involve moratoriums in some way whether short or long term.

Weaver is Chairman of the Fannin County Water Authority. Born and raised in Fannin County, she is also a retired Vice President from United Community Bank. She stated she is running to help save the county from what is happening to it.

With concern over the issue of water, Weaver is hoping to look into better supplies for water to the whole county. She said she wants to work with the cities to find ways to cooperate on water authority access and service to all citizens as many use insufficient wells or have too many families on the same well. The growth also pressures the water needs. With affordable housing and the county’s grown being specific questions asked in the forum, Weaver also suggested restrictions on building projects such as subdivisions through lot sizes or lot numbers. She agreed that overdevelopment is an issue and spoke on options like zoning as a possible answer. She noted that many may cringe at the topic of zoning specifically but insisted that the county needs to come together over the issue for a common solution.