BLUE RIDGE, Ga – The county financial report through May 2020 provided some good news in the era of COVID-19 economic uncertainty.

Overall, Fannin’s revenue was only off by two percent compared to 2019, and SPLOST and LOST collections were slightly ahead of last year. LOST and SPLOST went up around $50,000.

“We were really doing very well up until the mid-point of March when COVID hit, and we had to restrict a lot of tourism in the county,” Helton explained. “From mid-March until the end of April, that period was very bad on revenue, but in May, those numbers are starting to come back.”

Risk management also came in at eight percent under budget – insurance normally goes over budget due to claims.

“The public works department been doing a lot of things to try and keep that capital expenditure, and SPLOST expenditure down,” said Chairman Stan Helton. 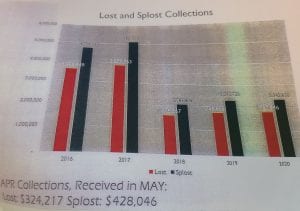 LOST and SPLOST collections through April 2020.

The county paid half of its debt for 2020, which left three payments before paying off the new courthouse building entirely. The recreation department was $54,534 under budget. The fire department went over because of the lease payments. Sheriff’s office had capital outlay expenses that resulted in an overage, and jail’s overage resulted from inmate medical expenses. However, the overages should go down as the year continues.

The total expenditures dropped eight percent through May 2020.

“That’s good that we are down by eight percent because when you look at the revenue, we anticipated for this year, through May, it’s off two percent – that’s not as bad as we thought it would be at this point,” explained Helton.

All departments previously received instruction to review their expenses and make necessary cuts to prevent shortfalls.

“It’s a very good sign that it’s only off by that percentage. I hope the monies continue to come in, and we stay on the line we’re on now, and hopefully, it will get a little better,” added Post One Earl Johnson. 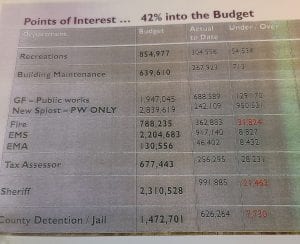 Most departments appeared under budget almost half-way through the year.

Clerk of Superior Court Dana Chastain presented a plan to build an interior wall within her office to allow everyone to conduct business safely. The wall would be in the shape of an “L” and would protect her staff and clients from potential germs. The Clerk’s capital outlay budget would pay for the addition, and it will cost $35,377.

“The way we have always done business is it’s an open concept. explained Chastain. “We’re like a hub to do business, and if we were to shut down, banks couldn’t lend money. They couldn’t get their filings timely.”

Chastain also outlined her current plan to allow attorneys into the office on Fridays and Saturdays. She also sent her staff home on those days to keep them safe, and she would deep clean the area. 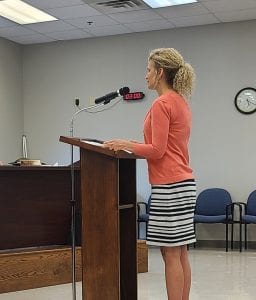 “I want the public to know that they have access to anything that’s in my office. All they have to do is request it, and like I said, we have a great staff,” said Chastain.

Another $600 received Commissioner approval to repair the rain damage in the Clerk of Superior Court’s office. Rain leaked through the window and resulted in mold growth.

Public Works Director Zack Ratcliff gained approval to bid out a road paving job for three roads. The county would use LMIG funds from GDOT and a 30 percent match from the county to pay for the work. LMIG would contribute $732,476.14, and the county would pay $219,742.84.

If Fannin doesn’t use the LMIG funds from GDOT, the money disappears, or the county could be required to pay it back.

All bids must include a third-party inspector to monitor the work. 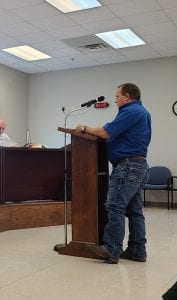 The commissioners accepted a land lease agreement with Verizon Wireless for the company to build a 250 ft. cell tower. The tower would increase cell service by a 3-mile radius and be located next to the public works department. Fannin collected a $500 signing bonus and $9,000 payments over five years. If renewed after five years, the amount increases by 10 percent.

Commissioners extended the UGA Extension Agent Contract for another year. Fannin pays $7,400 in employee compensation and benefits for the local extension agent.