Blue Ridge, Ga. – The Fannin County Fire Department (FCFD) responded to a blaze on Tuesday, Sept. 10 that had early morning commuters concerned and commenting via social media on the size of the fire. 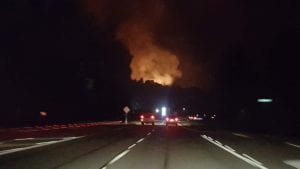 Fire visible to commuters on Hwy. 515.

Dispatch came out at 5:23 a.m. that there was a commercial fire in the vicinity of 27 Patterson Lane, just short of the Gilmer/Fannin county line.

Emergency personnel were on the scene within 7 minutes, and found that the source of the fire was a structure housing multiple loads of stacked lumber. Also on the property, owned by Charles Sisson, were other structures similarly housing stored lumber.

“They were reporting that it was a structure that was fully involved,” FCFD Fire Chief Larry Thomas said explaining what those who were first to arrive witnessed as the fire was already raging and growing by the minute.

The FCFD was able to set up quickly and began to contain and extinguish the flames. Fannin County Sheriff’s Office parked along Highway 515 to provide the fire department with a visible barrier for commuters to see. This allowed fire engines to shuttle water from a main hydrant to the scene of the fire.

Among those to respond were Engine 1, Engine 11, Engine 12, Engine 16, Medic 1, Medic 11, and Brush 1. Brush 1 is a brush truck which is a smaller 4 wheel drive vehicle equipped with its own pump and capable of getting into areas where the larger engines can not go.

For a brief time the woods directly behind the structure also became involved with the fire.

“It wasn’t traveling at a high rate of speed in the woods,” Thomas said of the fire’s path and added, “We did call Georgia Forestry in.”

Georgia Forestry Commission is equipped to handle brush fires. A team of two arrived from the department with a bulldozer and helped to put out the small amount of spread left in the woods. They also established a fire break to help prevent any more spread to the wooded area from the large structure fire. 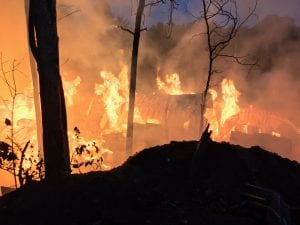 The structure at the time of being fully involved.

The Georgia Forestry Commission then used the bulldozer to move extinguished lumber away from the woods to prevent any spread through hot-spots left in the lumber.

The fire was contained to the single structure without spreading to neighboring structures and was extinguished. Crews left the scene at 12:48 pm.

In total 14 firefighters from the FCFD responded to the early morning emergency and all left the scene without any reported injuries. No workers from Sisson lumberyard were present at the time of the fire.

Tri-State Electric Membership Corporation (EMC) responded to the property and reported that there was no electricity running to the building at the time of the incident. The cause of the fire is still under investigation.

“The team did a great job,” Thomas said of the efforts of all involved. He expressed thanks to the Georgia Forestry Commission and the Fannin County Sheriff’s Office.

Thomas added, expressing his gratitude for those on the roadway, “Traffic got a little heavy because of the morning commute, but everyone on the road yielded to our vehicles as we went to the scene, and while we were shuttling water.” He would like to give a special thanks to those citizens traveling Hwy. 515 that morning for using caution while passing through the area.