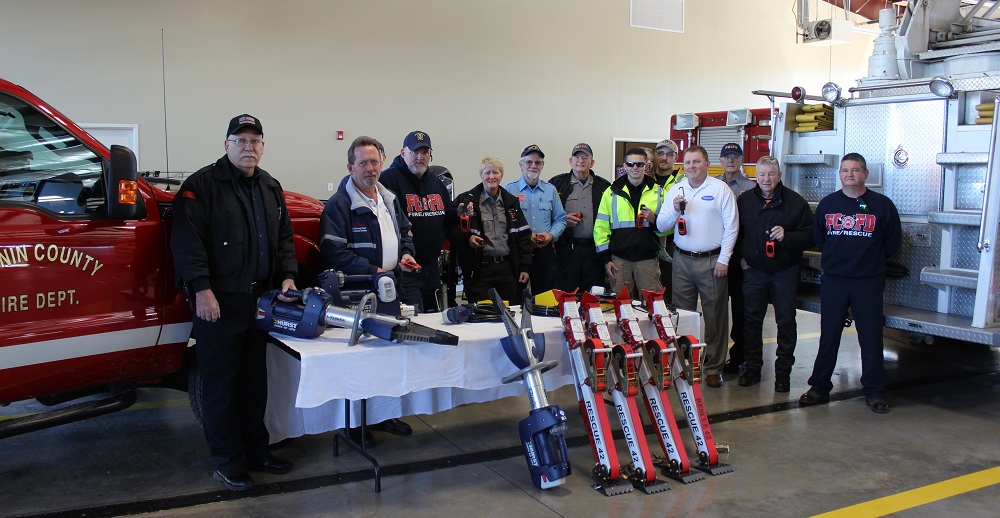 In an impressive display the Fire Department laid out equipment purchased in recent years that were directly funded from donations collected by the volunteer firefighters. 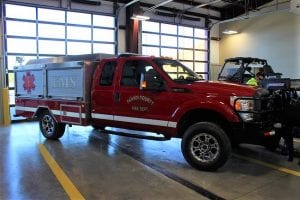 Rescue 2, the Volunteer Firefighters’ largest purchase made through public donations.

“We’ve been blessed here in the county for the last 3 years,” volunteer firefighter Kevin Panter said of the public’s donations, “it’s either been right at $100,000 or over $100,000 (per year), so the citizens have been very good.”

Through the volunteer firefighters’ mail-out program, in which those with Fannin County addresses receive a mailer asking for their support, the department has been able to purchase a number of life saving pieces of equipment.

Volunteer firefighters then decide what items and equipment is needed to assist the county “over and above” what is already funded. Once purchased all the equipment becomes county property.

One item that is purchased regularly through volunteer firefighter funds is Personal Protection Equipment (PPE), also known as “Turnout Gear” and “Bunker Gear”. This is the protective gear worn by firefighters during emergency calls.

Panter said of the gear, “It takes over $3000 just to get a firefighter with minimal essential equipment.”

It is estimated that through these donated funds, the volunteer firefighters suit up between five to ten members of the volunteer group annually.

It is not just these smaller purchases that public donations has funded, as Panter pointed out, while showing a river boat that had also been acquired in recent years: “It’s a low water river boat. We run probably 10 to 15 calls a year of people stranded in the river.”

“Our biggest purchase that the volunteers have ever made is Rescue 2,” Panter said as he pointed to a rescue truck parked in the bay of Fannin County’s new Public Safety Complex. 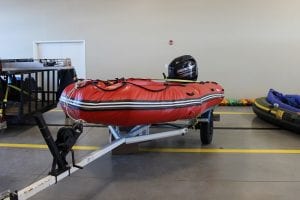 Rescue 2 is housed at the Mineral Buff station and came with an approximate price tag of $78,000.

Life saving equipment has also been updated through the volunteer firefighter funds. Among the tools purchased are Rescue Rams, or Telescopic Rams. This equipment, capable of pushing apart compressed areas such as metal that has been twisted in a vehicle accident, is used with cutters and spreaders to extricate victims of road traffic incidents or collapsed buildings.

Also among the vehicle rescue equipment were two sets of Vehicle Stabilization Struts, used commonly in the event of a vehicle rollover. A set of struts when purchased has a cost of $2,600.

In the last 30 days the fire department has been able to purchase an additional $68,000 worth of new equipment. A major portion of this cost, at $12,000 per piece, was in the purchase of three new eDraulic (electric/hydraulic) Extrication Tools, more commonly known as the Jaws of Life.

“That one right there is a combination tool. It spreads and it cuts,” Panter said explaining the benefits of the newly designed Jaws of Life.

The new, more compact version of the Jaws of Life is battery powered and capable of being operated by a single person. This is in contrast to the older, but still reliable version which is gas powered.

Older versions of the Jaws of Life are a bit more cumbersome for rescuers to use, with a bulkier mass, their setup and operation requires more time and personnel to employ.

“It can be a minimum of four minutes to eight minutes before we’re actually ready to start cutting on a car,” Panter said of the older version and added of the newly purchased equipment, “Now we get off the truck, get our gear, I grab that thing and as soon as I put it in my hand it’s working.”

Lastly, the volunteer firefighters purchased 18 new Thermal Imaging Cameras (TIC). These newer TICs are much smaller, lighter in weight and can attach to a firefighter’s PPE.

These TICs are valued at about $700 each, but through bundle purchasing the volunteer firefighters were able to get a discount on this price.

The compact, lightweight camera has two settings utilized by emergency personnel. The first of which is a type of temperature gauge allowing rescuers to search buildings for hot spots, which are particularly active parts of a fire or places where fire might still be active but is concealed. 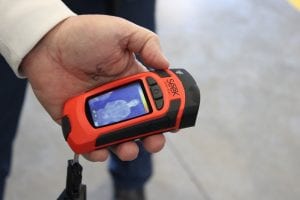 A second setting allows rescuers to “see through the smoke”. Panter pointed out that this setting is particularly helpful when trying to locate victims, both human and animal, in a fire.

Fire and Rescue Chief Larry Thomas spoke of the donations and the staff of volunteer firefighters in Fannin County: “I can’t say enough for the volunteers and for the community to pull and actually give us donations, as to the way that we’ve been receiving them, it’s heartfelt.”

“The county stands behind us. We’ve got donations that actually come in from people in FL that has properties here. It is really tremendous the way the community does us when it comes to donations,” Thomas said expressing thanks on the department’s behalf, and added a personal thank you to the volunteers, “For the volunteers of the department their out there in the middle of the night, of the mornings, of the day. They’re always there, and it does, it helps out a lot.”