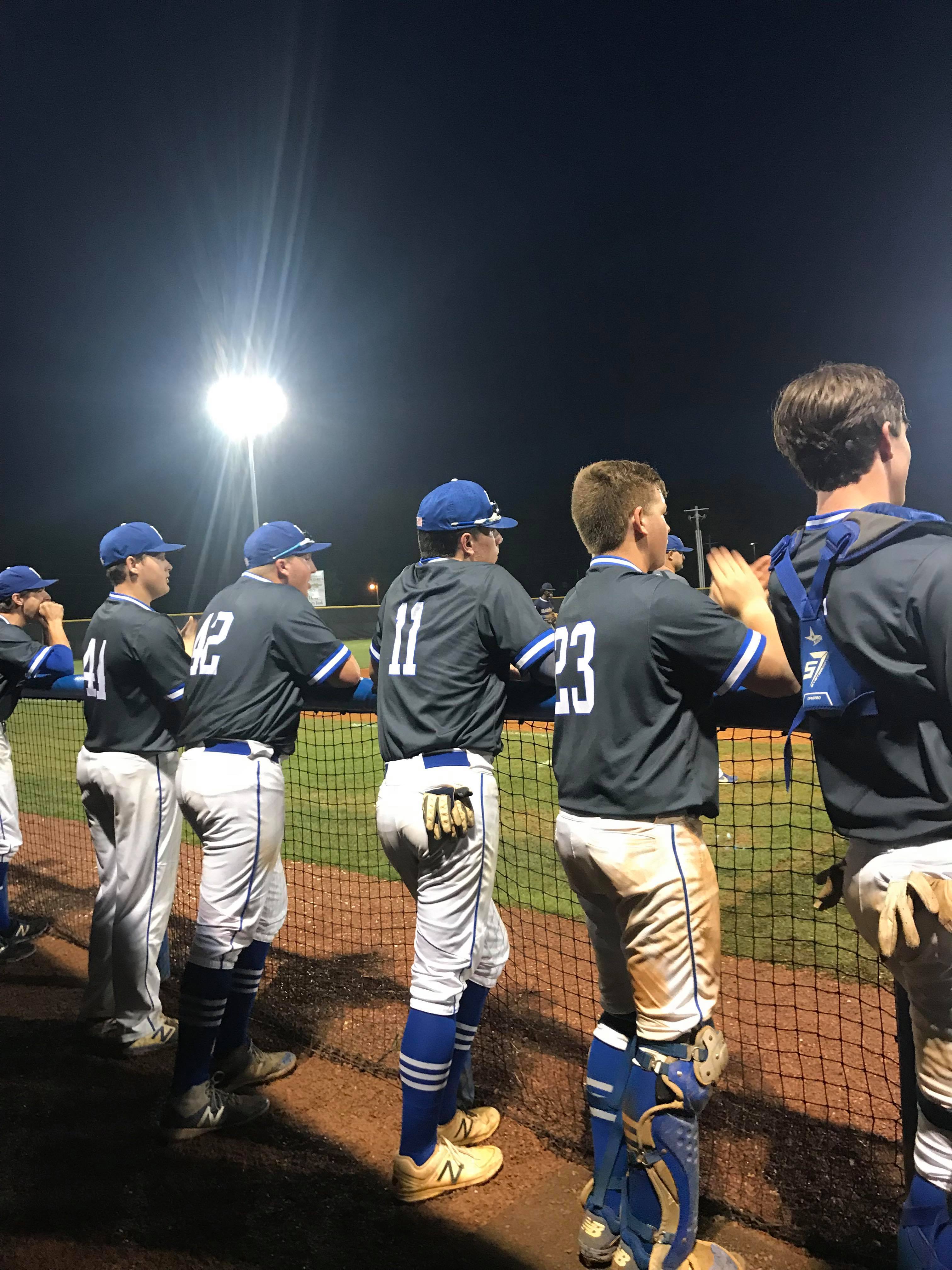 This past Wednesday, the Fannin County Rebels baseball team held the second round of the Sweet Sixteen as they went up against the Redan Raiders! The teams were competing in a double header in hopes of a double elimination for the other team.

Fannin started off solid on defense with a quick three up and three down outs. From the dugout, assistant coach Jeff Kuna stated, “That might have been the best first inning that they have ever played.” Redan then took the field and followed Fannin County’s lead with three outs in a row. At the end of the first inning, both teams held each other at 0-0.

Carson Beavers was on the mound for the Rebels where he had a great night as he struck out ten batters. The first batter up for Redan hit the pitch out of the park to get an early 1-0 lead over Fannin.

After a few more innings unable to get a run on the board, things started to turn around for the Rebels in the fifth inning. They started off battling on defense but finally got the third out as the bases were loaded. Jerritt Holloway did a great job behind the plate were he had quick throws to get runners out on steals. At the bottom of the inning, Fannin made their mark on the board. Rebel, Blake Rogers, was the first up to bat where he hit the ball to center field and got a single. Sophomore, Caleb Postell, went in as a courtesy runner for the junior and showed off his speed as Holloway advanced him to second base with a sacrifice bunt. Postell was on his way to steal third base when Redan’s catcher spotted him and over threw the bag, advancing Caleb home to put Fannin’s first point on the board. After the sophomore’s run, the score was tied 1-1 at the end of the fifth.

The Rebels kept up the energy to start off the sixth inning. Fannin played a solid defense by not letting anything get by them. Senior, Tyler Norton, had a great snag at second base where he threw to first base to get the last out of the inning. The Rebels bats were hot as they transitioned to offense. With the bases loaded, Beavers got a big lead off of third when the catcher attempted to throw him out but instead overthrew the bag which resulted in Fannin earning a 2-1 lead. The trend continued from there as the Rebels kept adding runs to the board. Matthew Shirah was the next batter up who hit a bomb to center field and drove in two more runs for a 4-1 lead. Shirah finally made his way to third base when Holloway went up to the plate and put down a sacrifice bunt for him to be thrown out at first but for Shirah to end the inning by earning one last run, putting the score at 5-1.

As Fannin reached their second out of the seventh inning, Carson Beavers was taken out of the game as the fans replied with a standing ovation for his great performance. Blake Rogers took the mound to close out the game as his pitch was hit to Gabe Buchanan at third base who made a quick out at first to end the game with Fannin ahead 5-1!

After a short break, the teams hit the field again. While Fannin hoped to win to advance to the Elite Eight, the Raiders were hoping for a victory for another chance to compete to be the ones to move on. Redan started off as the home team while Fannin started the game on offense. Carson Beavers was on third base when Matthew Shirah hit the ball to left field for a single and advanced him home for Fannin’s first run. Another ball was hit to left field by Blake Rogers who loaded the bases. Jerritt Holloway was determined to keep the trend going by getting on base which he achieved by being walked and sending home Gabe Buchanan to extend Fannin’s lead 2-0.

Chandler Kendall was on the rubber for the second game of the night where he struck out three batters. Redan was quick to respond to the Rebels lead by scoring two runs of their own to tie up the game 2-2.

The Rebels bats got hot to start off the second inning. Their hits were contagious as they scored four more runs to advance their lead. When the time came for Fannin to hit the field, they played a solid defense and held the Raiders, closing out the inning with a score of 6-2.

Fannin kept up their great defense for a couple of innings and Blake Rogers relieved Kendall from the mound. Rogers pitched the rest of the game where he struck out nine batters overall.

The Raiders started to see hope for victory at the bottom of the fifth inning. They started to put the ball into action and great things happened for them. After a couple runners made their way on base from walks, the rest of the team started to gain confidence to do the same. Redan kept placing the ball in the perfect spot where Fannin was unable to get the outs which resulted in them earning runs and tying the game 6-6.

Both teams were so close to a lead and neither wanted to give it up. When the score was still 6-6 at the bottom of the seventh inning, the game had to go into an extra one. Each team was determined to win and ended up playing eleven innings overall that went into the next day.

You could see the determination and heart that both teams had from the way they kept pushing and never gave up. At the bottom of the eleventh, Redan had a runner on base and a batter who hit the ball to the outfield, bringing in the winning run. The game ended at 12:15am as the Redan raiders claimed their 7-6 victory over Fannin County.

Since the series was double elimination and both teams won a game and lost a game, they were matched up to play again Thursday night at 5:30 for the final game of the Sweet Sixteen to determine who would be moving on to the Elite Eight.