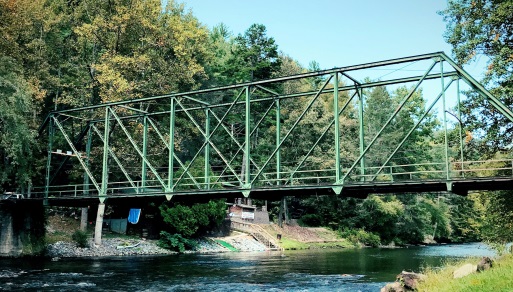 Blue Ridge, Ga. – Citizens united to express concerns over the Georgia Department of Transportation (GDOT) initial plans to replace the Shallowford Bridge or “Iron Bridge” located off of Aska Road, and now they unite once again to present solutions rather than complaints to GDOT about the future of the Aska Adventure Area.

Originally the fate of the Shallowford Bridge came into question when plans emerged for a replacement bridge in the area.

Constructed from a steel truss frame and having a wooden deck to allow for traffic, the 100 year old Shallowford Bridge spans 175 feet crossing the Toccoa River. The bridge also forms part of the Benton MacKaye Trail.

These concerns were relieved when GDOT announced that they would not be demolishing the Shallowford Bridge, but rather would be constructing a new bridge nearby. GDOT also expressed that they would be willing to “hand over” the bridge to become property of Fannin County leaving the county responsible for maintenance.

The new location of an upgraded bridge has many residents and business owners in the area concerned. Set almost directly beside the Shallowford Bridge, citizens feel that this could cause more congestion and more safety issues in the area.

“The majority of us, we’re not against the bridge,” Kimberly Wolfe co-owner of the Iron Bridge General Store and Cafe said explaining the purpose of the meeting. “We feel like we do need a new bridge. That’s not an issue. The placement of the new bridge is a huge issue.”

“This one (Shallowford Bridge) has been on the radar for a long time. Out of 100 it scores 13 on sufficiency,” Emil Dunn a member of the State Transportation Board elaborated on the need to build a replacement bridge.

Ron Grace, a resident of the Aska Adventure Area, proposed a different site for the replacement bridge. This site located beyond the Shallowford Bridge, traveling in the direction of Newport Road, would utilize a small portion of land currently owned by the U.S. Forest Service.

Having spoke with the GDOT project manager for the Shallowford Bridge replacement, Grace said of the interaction, “They had not considered the US Forest Service property. They say they are going to look at it.”

According to Grace, GDOT had only considered the proposed site which they presented to the public and a site upstream closer to the Toccoa River Restaurant, but that the second site would have required the purchase of a home.

“Not knowing anything, they put it there because they thought it would look the best and have the least amount of impact,” Dunn spoke of GDOT’s reasoning for the placement saying that it came from an engineer’s perspective and that the proposed site would have the least environmental impact.

Another resident present at the meeting added, “When they (GDOT) picked that site it was because the bank was already high and you didn’t have to build up the bank.”

Area business owner Felton Stephens spoke of the group’s proposal to move the bridge further from the site recommended by GDOT: “It’s a win win situation, it takes most of the traffic off of the home owners, and they could also, if the county wanted to, put in a little more public parking out there. A little bit more access.”

Stephens spoke of adding additional parking near the bridge if it were to be moved to U.S. Forest Service land and an area where kayakers and tubers of the Toccoa would have a place to get in and out of the river.

While citizens seemed agreeable to approaching GDOT with the new proposal site up river, questions still came about regarding the upkeep of the original Shallowford Bridge.

Beyond Fannin County’s already budgeted roads and bridges line item, Dunn also pointed out that there is the possibility of extra funding from the state through the use of a Local Maintenance and Improvement Grant (LMIG).

If a typical LMIG is applied for by the county and accepted by the state, it allows for a certain amount of money to be designated toward a county project with the county being responsible for a percentage of the cost.

Another option for restoration and maintenance of the Shallowford Bridge was presented by a resident saying that it might be possible to have the bridge put on the Historic Register which would allow for extra funding to be received for its preservation and care.

According to the Library of Congress the “Iron Bridge” is one of 50 Pratt truss bridges recorded in the state of Georgia. Three of of the 50 bridges on record reside in Fannin County.

The fate of the new Shallowford Bridge is yet to be determined, but citizens hope that their voices will be heard before a final decision is made.