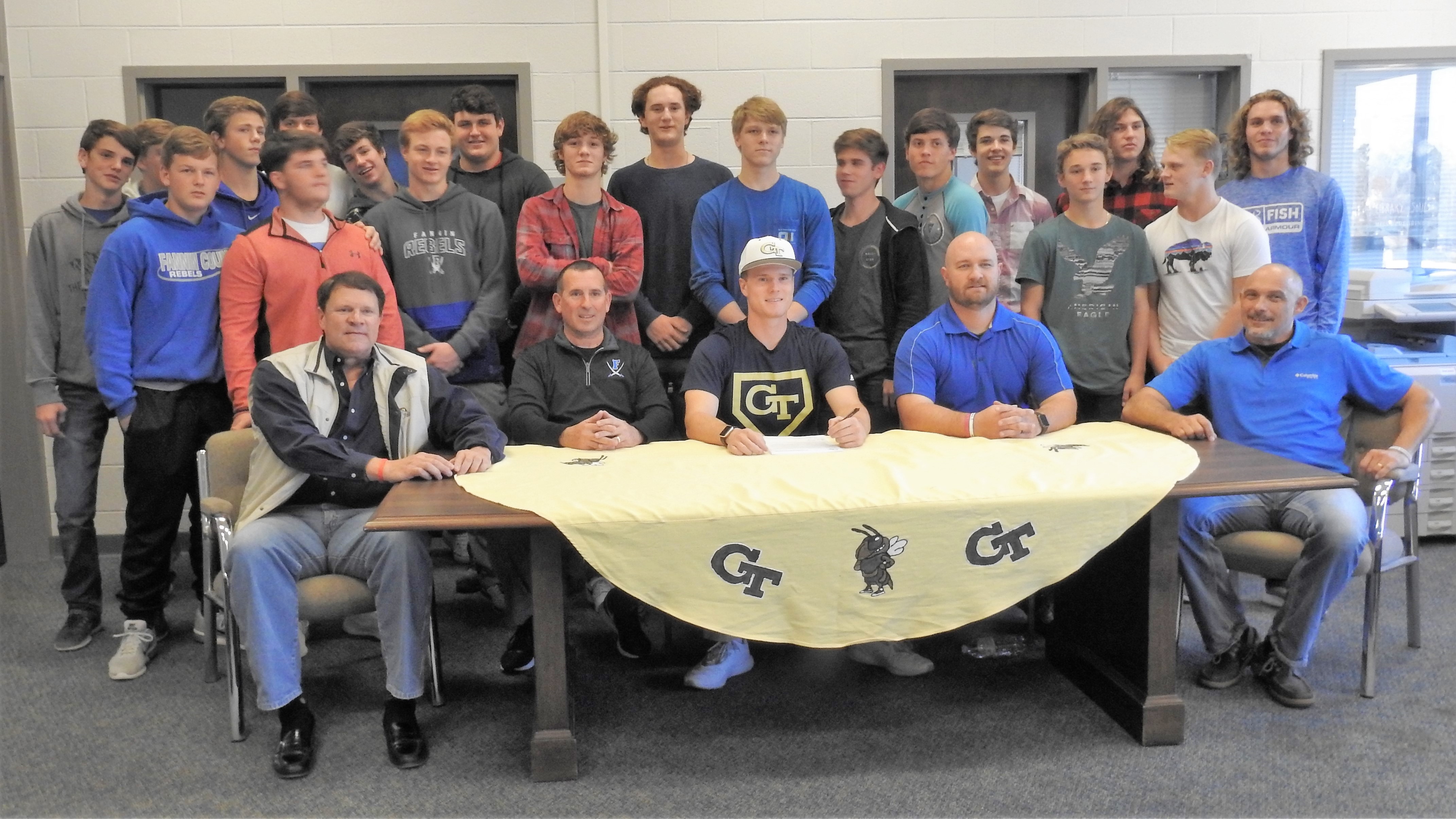 The coaches at Fannin County High School have had the pleasure of coaching some talented individuals over the years.  Some athletes shine on the field, others in the weight room, and many are just great students.  That’s nothing new in a school that boasts some of the best teaching, coaching and administration the state has to offer.

What’s rare is finding an athlete that encompasses the “total package” – a great student, talented athlete, and a pristine example within the community.  A coach can go his entire career hoping to mold and mentor such an athlete.  Jon Ayers took over the baseball program at FCHS four years ago, and upon his arrival, he met Will Shirah; i.e. the total package.  The credit not only goes to Ayers and the FCHS coaching staff for polishing Shirah’s performance on the baseball field and in the classroom; but also to his parents, Cliff and Julie Shirah, who have raised more than a great baseball player.  They’ve raised a fine young man. Will Shirah’s family and coaches surround him after signing his letter of intent to play baseball for Georgia Tech next year.

Academically speaking, Shirah’s awards nearly outweigh his baseball trophy case.  Ranked #1 out of 204 students, the Hugh O’Brien Leadership Award Winner has already earned 25 college semester hours as a Dual Enrollment student with a perfect (4.0) grade point average.  A member of the National Honor Society as a sophomore, a member of the FCHS Academic Team both his junior and senior years, and recognized with Student Athlete Community Service Network’s All Area Honors; it’s no surprise Shirah was Senior Superlative voted “Best All Around” student at Fannin County High School.

When Shirah isn’t throwing 90mph fastballs across the plate at the baseball diamond, he’s throwing mashed potatoes and dinner rolls on plates at the Feed Fannin Thanksgiving Dinner as a Charity Good Samaritan volunteer – much slower than the fastballs, thankfully.

Shirah also volunteers to help prepare bags of food, furniture and clothing for homeless and indigent families with his church group at the Copper Basin Crisis Center.  He’s a Fellowship of Christian Athletes event leader and actively works with multiple Christian outreach programs such as Fields of Faith.

He is a member of the United Community Bank Junior Board, along with 11 other seniors, which gives back the community by participating in monthly events such as Relay for Life and more.

Shirah’s work as a volunteer with the Fannin County High School Baseball Camp will be missed when he leaves for college, but he will undoubtedly also be missed at First Baptist Church where he regularly helps in the nursery.  His resume for community service serves as a role model and positive example for everyone around him, a trait his coaches and parents each shared with everyone in attendance at Shirah’s college commitment signing.

His grades are superior, his involvement in the community is respectable, and his attitude is humble; but his performance on the baseball field is phenomenal.

Shirah has lettered his freshman, sophomore and junior years at FCHS.  He was also named All Region First team (7-AAA) all three of those years.  He received the pitching award all three years, and he averaged 1.7 K’s per inning pitched with 190 K’s in 108 innings (Author’s note: In baseball scorekeeping, a swinging strikeout is recorded as a K).  He received the batting award as a freshman and a junior.

Shirah was recently named to the Preseason All State Region 7-AAA team and he was selected to be on the cover of the 2018 Georgia Dugout Club Preview Magazine.  He’s also been named to the Rawlings PG National Preseason Underclass All America Team for the third year in a row.  In 2016 and 2017, he made the All-Tournament team in the 17u and 18u World Championships.

Shirah was named to the Top Prospect Team at PG Jr Nationals and Nationals (an invitation only event held in Ft Myers, FL for the nation’s top rising high school junior and senior baseball players).

Truth be told, there are too many accomplishments in Shirah’s high school baseball career to list them all.  His ability to play the game has garnered national attention – including baseball recruitment (and/or offers) from Stanford, Notre Dame, Virginia, North Carolina, Duke, Louisville, Vanderbilt, Penn State, Harvard, Coastal Carolina, College of Charleston, and last but not least: Georgia Tech.

On Tuesday, November 14, 2017 at 3:45pm, Will Shirah thanked his coaches, parents, friends and teammates.  He gave credit to his faith and everyone who supports him as he put pen to paper and signed his commitment to play baseball for the Georgia Tech Yellowjackets.  We look forward to following his continued success in the future.