FANNIN COUNTY, Ga. – With previously approved expenditures coming back to the county with changes, Fannin County approved two major increases to planned expenditures this month through the Library and the Public Safety Department.

Fannin County has celebrated a state grant in support of building a new library within the county. Even hosting House Speaker David Ralston at the more recent announcement of an increase to that grant. This month saw the Board of Commissioners return to that agenda item to adopt the official resolution to increase the county’s expenditures to match the doubled grant amount.

That amount from the state was originally set at $1.3 million and has since doubled to $2.6 million. Now, with this approval the county has officially increased its match from the original $650,000 to $1.3 million. Approved unanimously by the Board of Commissioners, this agenda item solidified the county’s final commitment to the project increase.

Within the Public Safety a Ford F250 pickup truck hasn’t been received from the dealership one year after its order. Approved on June 22, 2021, the order for a new truck in the department still hasn’t come in at the end of July 2022. Furthermore, according to EMA Director Robert Graham, it could be very late this year or even next year before its even in production as he has been told by the dealership.

To answer the immediate need, the department has found another vehicle, a 2022 Chevrolet 2500 Heavy Duty Crew Cab Truck. With rising costs of materials and shortages on supplies in the nation, prices have continued to rise since the original trucks order, though. The Ford was ordered for a price of $32,789.64. The new vehicle, the chevrolet, has already been produced and is for sale for $54,000. 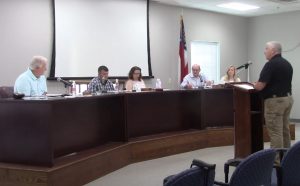 EMA Director Robert Graham speaks to the Fannin County BOC about a new squad vehicle after a previously ordered one hasn’t seen delivery in over a year.

The departments current vehicle in use has over 179,000 miles and needs replacing. Graham told the Board of Commissioners that it is run every day for medical and fire calls. The vehicle responds out of Station 1.

Director Graham is requesting that the county use SPLOST to purchase the Chevy for use, but not instead of the Ford F250. Graham stated, “We will never get another new vehicle at that price. I suggest we leave it on order to come in next year or something for future use. At $32,000, you’re not going to get a three-quarter-ton pickup for that price anymore. As long as we keep it on order, they’ll have to hold to that price.”

The troubles continue as the department also looks ahead to future orders as Graham reported that Chevrolet opened to receive “fleet orders” for only four hours on one day and will not accept any more orders again until next year.

The county approved the request for expenditures from SPLOST to cover an extra $54,000 on top of last year’s approved purchase and is looking to continue along with the previous order as requested, although some early discussion came that the Ford truck could be used in another department if a major need arises before it is delivered. Even if production does start on the vehicle in late 2022, the county could still see delivery not coming until 2023.