Blue Ridge, Ga. – After much wait and debate, the playground at Blue Ridge City’s downtown park is officially reopen for public use.

Several council members, Mayor and members of the city’s Street Department  met at the park on Thursday, April 22 to commemorate the reopening. 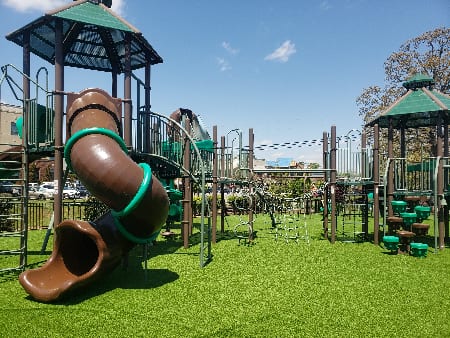 The park had been closed for several months after Council Member Mike Panter discovered that certain aspects were not in safety compliance and needed to be addressed.

The park was initially in compliance upon original renovations, headed by former council member Angie Arp, but issue arose over lack of upkeep following these renovations.

In particular the park’s mulch had become compacted over the years and no longer met safety standards to provide ample padding.

“We haven’t had any additional mulch added in three and a half years. We have not had an inspection in three and half years since it was put in,” Panter had previously explained.

City Council voted for the long lasting synthetic turf and padding option, presented by Panter, to cover the park’s grounds and the City of Blue Ridge Street Department worked diligently to correct any drainage issues in the area.

The city has also received approximately $19,000 from a private donor for shades to be installed at the park. These shades will be installed on the playground’s existing equipment.

“The shades have been ordered,” Panter said, “And as soon as they arrive they will be installed.”

Arp also stopped by the park to see the latest in renovations and commented, “It is really nice. I’m glad that it will be opened back up in time for the children to really use when school lets out for the year.”