Blue Ridge, Ga. – Citizens could see a change in the way the City of Blue Ridge is managed after the city council voted on charter changes that would allow for the hire of a City Manger.

According to council member Rhonda Haight, the move to a city manager or a full-time mayor has been discussed among councils for several years. Haight stated that when looking at projected growth of the city, citizens would benefit by “making sure someone is here full-time to answer questions”.

“The council still has control over everything, including the budget, hiring and firing of the city manager,” Haight explained of the proposed move, saying that the only difference would be that a City Manager would not be an elected official and would therefore be able to be held accountable for their job performance.

“We know there is a need for leadership,” Haight said, adding that while council members are currently overseeing departments, most members hold other full-time jobs giving them less time to keep track of everyday business.

“Our job is really to set policy,” Council member Nathan Fitts stated agreeing with Haight : “I think there needs to be some accountability to the public and this is the only way we’re ever really going to get there.”

Fitts added, “I think this form of government takes power out of people who want to be in the position for power. The mayor doesn’t have power then. It puts the workload on someone who is being paid to do it.”

Council voted in favor, with Mayor Donna Whitener and Council member Robbie Cornelius absent, to send a Resolution to the Georgia State Legislature requesting that the city be able to move to a City Manager form of government.

The Resolution would need to pass on state level before any charter changes can take effect.

If enacted, there would be a transition period of 1 year taking place in 2021, with the official City Manager style government going into effect on Jan. 1, 2022.

The City Manager position would oversee and have executive power over all day-to-day activities including inner workings of all departments, tax collection, and grant availability. 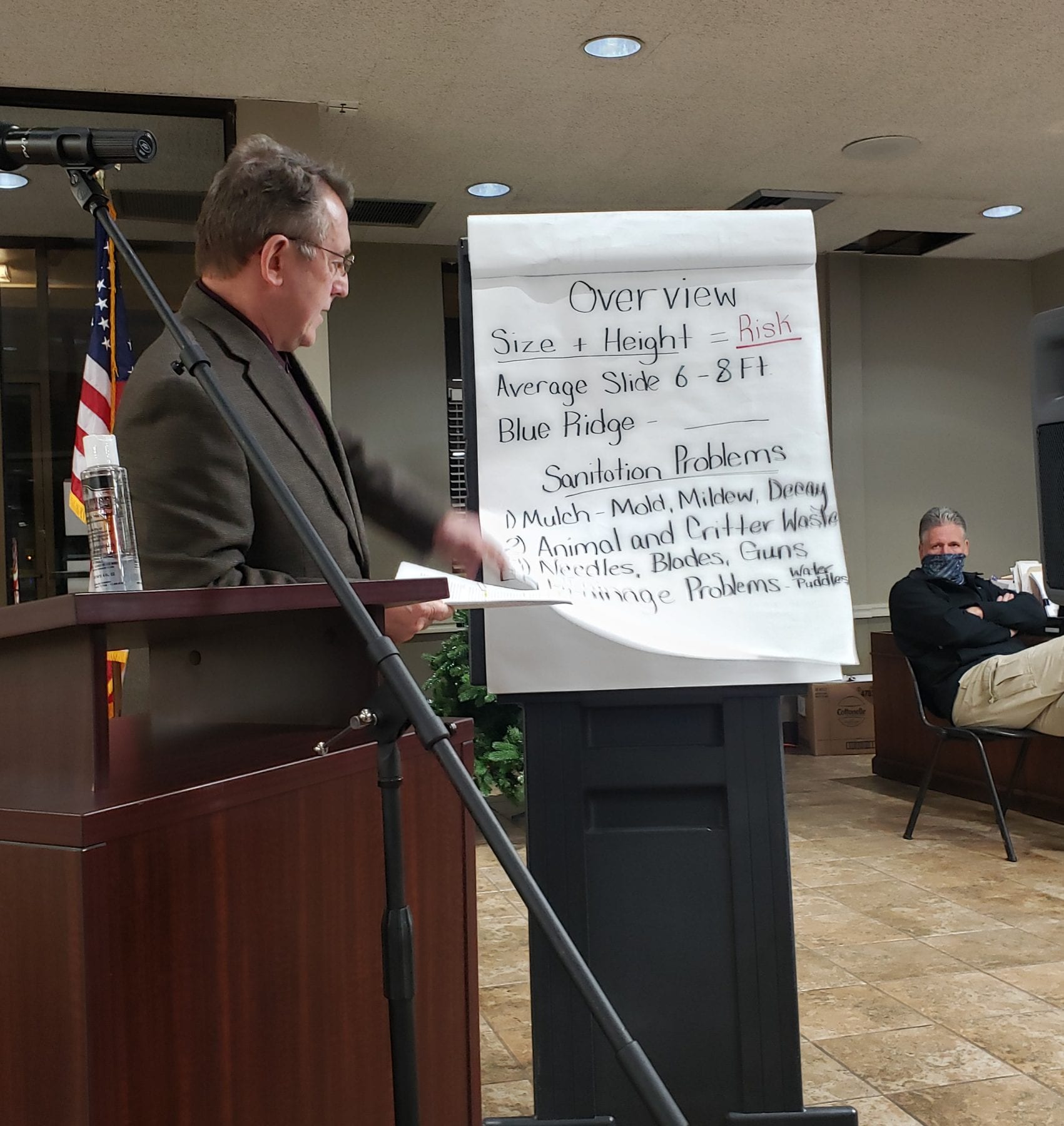 Council member Mike Panter going over his findings in a previous meeting regarding the city’s playground.

The City of Blue Ridge Street Department has been hard at work correcting the issue of drainage at the city’s playground.

With the corrections having been made, the council voted in favor of new padding and turf to be added and the playground be reopened to the public upon completion.

The issue of the drainage system was one that had previously halted some council members from moving forward with the new playground turf, concerned that there would be significant unforeseen expenses once corrections began to take place.

Panter, who wanted the playground corrected in a manner that would cut costs in the future, had been a strong proponent of moving to the padding and turf option rather than continuing with mulch.

“I do believe we have ample funding to do this at this point,” Haight said of moving forward with the project.

The company responsible for installing the padding and turf will have to do an initial inspection of the area and drainage system before their work would begin. The process is expected to begin as soon as next week.

Panter stated that he hopes the playground will be reopened by March 1, 2020, and could possibly be open sooner. Weather permitting and void of an unforeseen circumstance, once work has begun the process could be completed in as little as 3 weeks.

The city has also received approximately $19,000 from a private donor for shades to be installed at the park. The city could have to spend an additional $5,000 in this area.

Moving forward with work on the playground, at a cost of $60,743.75, was voted unanimously in favor with Cornelius and Whitener absent.