Blue Ridge, Ga. – Two officers with the Fannin County Sheriff’s Department were honored for their quick thinking that resulted in a life being saved.

A call came through dispatch of a single vehicle accident on Highway 2 near Flowers Baking Company. A silver Ford Focus driven by Michael Peppers of Blue Ridge had left the roadway and struck a tree. 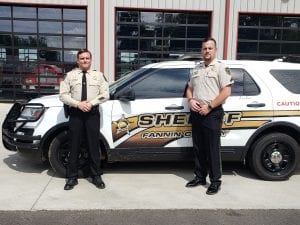 Corporal Dustin Carter and Investigator Gary Edwards were first to respond to the scene and saw that the male driver was alone and trapped in the vehicle.

“The door panel was crushed from striking the tree,” Investigator Edwards spoke of the scene upon arrival.

The door was unable to be opened and both officers saw the condition of Peppers deteriorating.

“He was slightly responsive. He was losing color and as we were speaking to him, his condition worsened and he just went out, non-responsive, lost all of his color,” Edwards recounted the quickness in which Peppers’ condition worsened.

Accident reports from that day detail how Peppers’ skin color began to become grayish in hue as his eyes rolled back and his breathing came to almost a complete stop.

“He was on the verge of completely not breathing. He was having agonal respirations,” Fannin County EMA Director Robert Graham spoke of Carter and Edwards’ actions and explained that agonal respirations is a gasping for air that is associated with body reflex and is seen in medical emergencies.

Investigator Edwards and Corporal Carter worked together to free Peppers from the vehicle, Edwards having to break out the back window to gain access. It was at this point that Carter recognized the signs of a possible overdose and Edwards retrieved his supply of Narcan.

Narcan is a nasal spray used for the treatment of an opioid emergency or a possible opioid overdose with signs of breathing problems.

Upon returning, Edwards reported that Carter was able to free Peppers from the vehicle and had him laying down on the ground. Edwards administered the nasal Narcan and Peppers began to breathe and move again.

When paramedics arrived, both officers helped to load Peppers onto the stretcher and observed that he was talking to paramedics as they left the scene.

“Seeing his reactions. From the time we got there, he was kind of responsive to unresponsive in just a few minutes,” Carter explained the decision to use Narcan. Carter says that training and experience are how he was able to quickly recognize the signs of a possible overdose.

The officers were given pins of recognition by Fannin County’s Emergency Management Team to acknowledge that their quick thinking and actions were directly responsible for saving a life.