Blue Ridge, Ga. – Rumors of a Rebels name change have taken social media by storm and those involved in the school system say that right now, it is nothing more than rumors.

With the current political climate, the Fannin County Rebels have once again been thrust into the community spotlight due to the school’s mascot.

Some on Facebook vow that the name has already been secretly changed to the Fannin County Raiders and that new uniforms have been the works, while others are simply joining the debate on whether there should be a change at all.

Head coach of the Gilmer County Bobcats, Kevin Saunders, chimed in via Twitter.

While not mentioning the rival Fannin Rebels specifically, Saunders did share in part: “Once again I hope schools decide to remove very explicit racial traditions. High school and Colleges, examples would be Dixie, Nickname Rebel or reb and the Confederate Flag. Some schools are but there is no need for this to be carrying on in this day and time”. 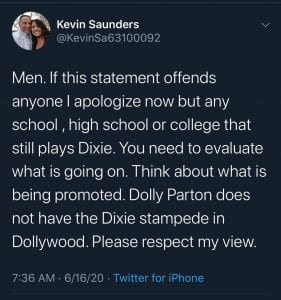 Fannin County school officials say that there have been no meetings for the purpose of changing the school’s mascot.

“I am a board member and there have been no meetings concerning a name change,” Fannin County School Board Member Mike Cole posted to Facebook, adding, “All you are seeing is what we called “rumor control” in the Marine Corps. None of this is factual.”

Cole also pointed out that a name change usually goes through the School Governance Team (SGT) and not the board.

Assistant Superintendent Robert Ensley spoke with FYN and confirmed Cole’s remarks. Like Cole, Ensley said that there have been no meetings regarding the Rebel name. Ensley also stated that a change in name would need to be addressed to the high school SGT.

Ensley stated that in order for there to be a change to the mascot it must first be brought before the SGT and then options would be given to be voted on. Student, faculty, and guardian input would all be considered if such a change were requested.

“There have been no agenda items to date for either the board or the SGT that have mentioned a change in the name,” Ensley said adding that all meetings are public and agendas are available to the public.

The next SGT meeting will take place on Wednesday, July 15 at 4:15 p.m. in the high school cafeteria. Those who are in favor of or opposed to a change in the Rebel mascot are encouraged to contact the SGT.