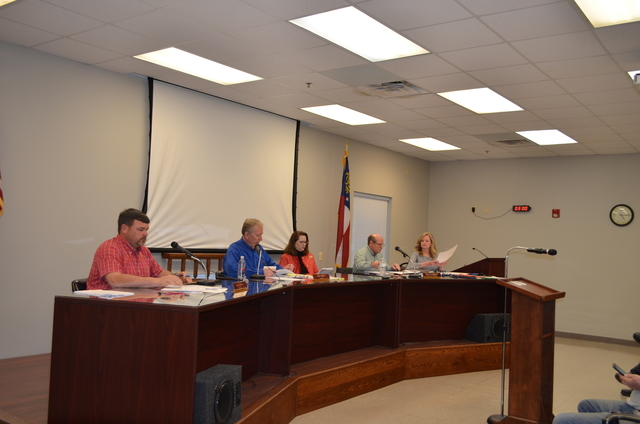 Chairman Stan Helton stated that these increases accounted for 95% of 2020 budget growth. The total expenditures sit at $28,564,665, and total revenue is $27,904,369, which created a shortfall for the county. As a result, Fannin must dip into the general fund balance to cover the expenses, approximately $676,616 for 2020. This is the second year that the county will use the fund balance but still has around 6 months in reserves. GASB recommends that governments keep at least two months in its unrestricted fund balance.

Johnson asked for the current fund balance number for the county. However, Gazaway didn’t have the exact number at the meeting and added it would be impossible to know. She said the 2019 fund balance wouldn’t be known until the auditors finished their yearly audit.

“It’s a hard thing for us commissioners to know if we’re on track if we don’t know what that number is,” commented Johnson, “Otherwise, the only person who is going to know is the county CFO.”

“Oh, yes” Gazaway responded. She explained that she sends out monthly budget reports to departments and reasoned that she “looks at the numbers every day” as to why she didn’t have an exact fund balance number ready.

Gazaway added, “I let Chairman Helton know if anything comes up.”

Johnson continued to press Gazaway on accurate numbers, “I’m not going to move forward until I have it. I think the CFO should have [the fund balance] number.”

Helton stepped in and asked, “Could we do an approximated fund balance?”

The CFO confirmed that it is possible and would be “pretty accurate,” but didn’t want to place any certainty behind it.

Helton also instructed Gazaway to print out the general fund bank account balance for the commissioners to review in the regular meeting.

Johnson also brought up the Risk Management number for the year asking where the county stood reinsurance wise. Gazaway said that Risk Management improved for the month from 105% to 102% into its 2019 budget. She believed it was at $1.6M currently. However, she “didn’t bring [her] budget papers at this time” and couldn’t confirm these numbers during the 2020 budget hearing.

Moving onto the regular board of commissioners meeting, Gazaway presented her financial report through Oct. 2019, which has the county operating 1 percent under. In this report, she presented Public Works New SPLOST as over budget by $175,542 and split out the GDOT LMIG grant of $732,476. The law does require grants to be listed separately from SPLOST or general fund revenue. 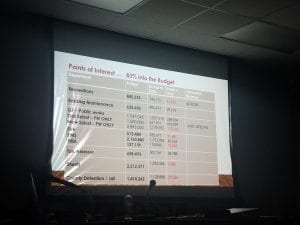 Public Works New SPLOST budget shows over, but the overall department isn’t over budget due to multiple grants from GDOT.

Johnson took issue with the presentation of this report because at a glance it appears that Public Works is over budget, but in fact, the department has around $800,000 from LMIG and SLMIG. Commissioners and the public in attendance have to do “a lot of math” to find accurate budget numbers.

Gazaway said, “Mr. Helton asked me just to put the LMIG on [the report].”

Helton agreed with Gazaway’s reporting of the budget report, “I guess if you look at it from just a general approach to it, we’re not [over budget in Public Works], but I guess the reporting on it as far as what has to be recorded as SPLOST, that number is what it is. That’s based-off of actuals to date.”

Gazaway doesn’t expect any additional money to come in to affect the new SPLOST number between now and the end of the year. The general fund in Public Works represents budget, salaries, and expenses which is under budget. The old SPLOST account was closed out, and Public Works began pulling from new SPLOST. This number is currently greater than expected in the approved 2019, but the LMIG and SLMIG grants counteract that overage.

“We’re told that we’re $175,000 over budget, but real money expended by county expenditures, we’re not. You have to decipher all this due to the way our CFO decides to report on these numbers. So since I don’t feel comfortable with a single number that you provided me with, I won’t be voting on the budget,” declared Johnson.

Patterson asked, “What can [other commissioners] do to make [Johnson] feel comfortable?”

“[The county] can provide real accurate fund balance numbers. We can act like every county around us,” said Johnson, “This is a county. It’s very serious to me and if you two feel good with those numbers, [vote on it].”

According to Johnson, Gazaway’s reports don’t accurately showcase how much the county owes against what the county has in the bank. Without any real numbers to judge the county’s financial position, he can’t vote to approve the 2020 budget.

Helton proclaimed that he was “okay with [the proposed budget] and ready to vote on it.”

The decision came down to Patterson, who ultimately elected to move the 2020 budget approval to Dec. 10. He suggested the Gazaway provide “paperwork that can be looked over beforehand to alleviate Johnson’s concerns.”