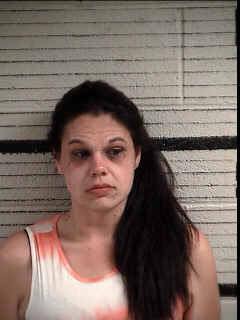 Champion, 25, spotted running out of Family Dollar with a bulging black bag full of stolen goods, approximately $57.47. She jumped into a beat-up silver Ford Fusion, driven by Haley Dillingham before the pair sped off toward Copperhill.

Polk County Deputies Patterson and Henderson responded to the call. McCaysville Police Department notified the deputies that the vehicle was parked in front of United Community Bank. Henderson arrived at the scene first, and Patterson joined after speaking with Family Dollar employees. The female employee chased Champion out of the store after seeing her run to the Fusion.

McCaysville Police Officers and Investigator Billy Brackett began a search of the vehicle and discovered drug paraphernalia Methamphetamine. Brackett took Champion into custody and charged her with a bond violation, shoplifting, and possession of Methamphetamine. 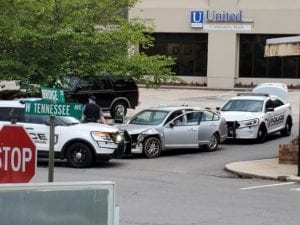 We contacted McCaysville and Investigator Brackett multiple times for comment, but have yet to receive a call back about the case.

Champion posted her bond on Thursday, July 25 of $5,500, but since then Fannin County Sheriff’s Office issued three more warrants for her arrest, including criminal trespass, theft by shoplifting and bond violations. These charges come from May of 2019 and occurred in Blue Ridge.

Dillingham stated that she knew nothing about the shoplifting, but record shoplifting from the store. Patterson issued a criminal trespassing warning and permanently banned Champion and Dillingham from the Ducktown Family Dollar.

Champion said she intended to eat some of the goods and give the rest to family.

Polk County has warrants for Dillingham and Champion for shoplifting.