Blue Ridge, Ga. – The Fannin County Board of Commissioners (BOC) began the process of opening up the way for competition when it comes to waste removal in the county.

Recent commission meetings showed much discussion about the current contract with Advanced Disposal. The contract set to expire on Sept. 1 of this year, requires the BOC give at least 180 day notice if there is intent to amend or cease further business with the company.

Post 1 Commissioner Earl Johnson expressed his disappoint with the company’s automatic 3 percent increase in price annually and said, “We’re where we’re at because there’s one company. You can’t get a competing price when no one else will bid.” 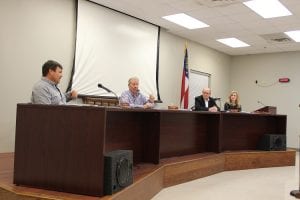 Board of Commissioners speak with attorney Lynn Doss about opening the door to competition.

All board members did recognize the asset Advanced Disposal has become to Fannin County through their community partnerships and participation.
“The intent is not to get rid of ADS. We still need them as an operator in our county,” Chairman Stan Helton spoke of the intentions behind the contract discussions.

Helton added that the BOC intentions were “to introduce competition, someone that can do the job, that would have a transfer station, and see if we (BOC) could open the door up for them to at least quote, bid, or prove to us that they would be a viable alternative, another resource for the county.”

An individual has come forward and spoken with commissioners about the possibility to offering their services to the county. Helton had a meeting with the individual that he referred to as being “positive”.

“This is a gentleman that has an interest in serving the community and he’s got equipment and a transfer station that would be available,” Helton said explaining the meeting and pointed out that the services the individual could provide would be on a much smaller scale than Advanced Disposal.

Previously Fannin County was under consent and by court order could only allow for one solid waste transfer station to operate. This order has since expired.

Fannin County Attorney Lynn Doss told the BOC that she would review the consent order and work towards allowing for the county to have more than one solid waste transfer station and recommended that the BOC develop a pricing template for waste removal before seeking bids.

Johnson added to this that the county needs a set of requirements, above the already mandated state requirements, to ensure that companies operating in the county are permitted by the state and capable of delivering the results that are agreed upon.

Helton reiterated that he is not in favor of eliminating Advanced Disposal’s services as the county’s primary supplier and added that he didn’t feel that anyone at this time is in a position to take the place of Advanced Disposal.

“We felt if there was some way to open up a little bit of competition, perhaps that would be the favorable result for the county,” Helton explained that perhaps in years to come that a door would open to receive numerous bids.

Johnson spoke of Advance Disposal, “Advanced, as far as I know, they handle all of the garbage the county has right now. They do a good job of it,” but added that his goal is to stabilize costs: “I think we should look at every route to try to reduce our prices.”

No official vote was needed in the matter and with all three commissioners in agreement about saving the residents of Fannin County money, they gave the go ahead to Doss to notify Advanced Disposal of their intent to negotiate the upcoming contract.