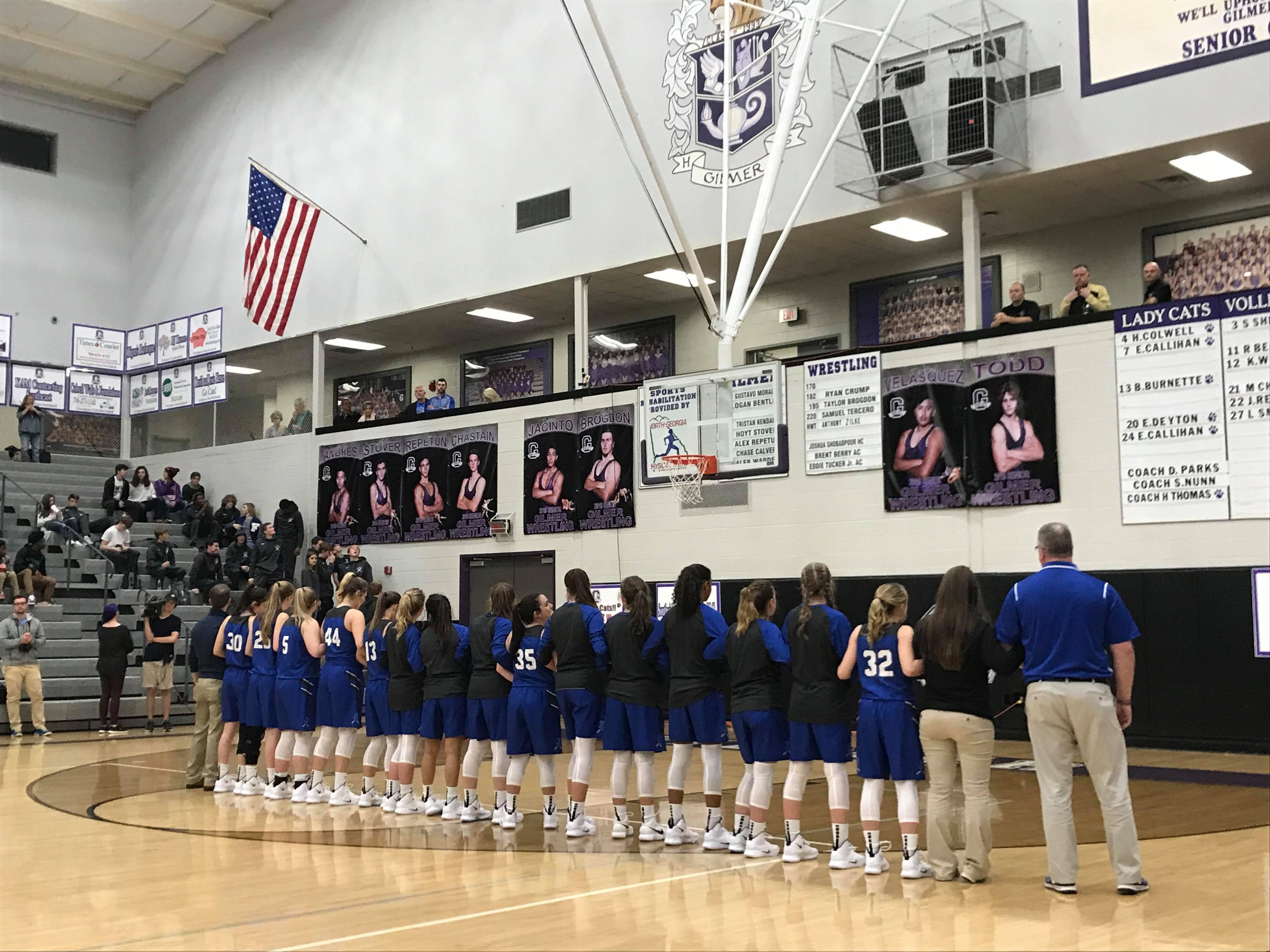 On November 17th, the Lady Rebels traveled to Gilmer County High School to compete in the annual Tip Off Tournament. The Rebels played three games over three days where they went 1-2.

To kick off the tournament, Fannin took on Pickens County where they lost 50-47. On that next Monday, the Rebels took the court to play their rival game against Gilmer County. The Lady Bobcats started off with the ball and put heavy defensive pressure on Fannin by putting a full court press into action. The Lady Rebels had great looks up the court where they eventually found senior, Reagan Henderson, who put up nine points for the night. Sadie Collins followed right behind Henderson with seven points thanks to her grit on the block. As Gilmer went right through the middle, junior Morgan Holt had great fakes and and drove the lane where she contributed six points to Fannin’s score. Fannin kept their lead as Gilmer trailed behind them for the first two quarters. The Rebels began to drive in then pull back for quick shots to score their points. Mackenzie Johnson showed off this skill and added three points to Fannin’s score. Johnson was right behind Abby Ledford who put five points on the board. Senior, Maleah Stepp, led the Rebels in points for the night by contributing thirteen points to their score. By the end of the third however, the Lady Bobcats tied up the game 37-37. Fannin got scrappy on defense in the fourth quarter as they started to foul Gilmer. As a result of the Rebels fouls, the Bobcats shot twenty-one foul shots just in the fourth quarter while Fannin only got to shoot nine. Despite Fannin’s fight to take the lead, Gilmer’s foul shots put them ahead 52-45 in the end.

The day after Fannin’s loss to Gilmer, the Lady Rebels took on Hiwassee Dam for their last game of the tournament. The Rebels started off the game slow and let Hiwassee Dam take the lead with their three point shots in the first quarter while Fannin relied on shots down low. Senior Rebel, Reagan Henderson, received good passes on the block where she scored seven points followed by Olivia Sisson with three.The Lady Eagles closed out the first quarter just barely ahead of Fannin with a 12-9 lead. The Rebels started to pick up the pace in the second quarter and brought all of the aspects of the game together. Morgan Holt had great drives to the basket where she led Fannin in scoring with fourteen points. Prisila Bautista made her mark on the court with her two points for the night. The Lady Rebels pulled ahead at the end of the second quarter with a score of 19-14 and were able to keep advancing their lead over the Eagles. Abby Ledford and Mackenzie Johnson flew past the defense as they drove up the court to the basket. Ledford contributed ten points to Fannin’s score while Johnson added four. As time started to run out for the Lady Eagles to make a comeback, they started to foul. Freshman Becca Ledford made five out of her eight foul shots for the night, followed by Emily Beavers five points, and Ashton Davis’ two points. Fannin kept their lead until the end and closed out the game with a 54-37 victory over the Hiwassee Dam Lady Eagles. After the game, seniors Maleah Stepp and Reagan Henderson were awarded with the titles of All Tournament Players for the series! Junior, Morgan Holt, also got recognized as a selection for the award!