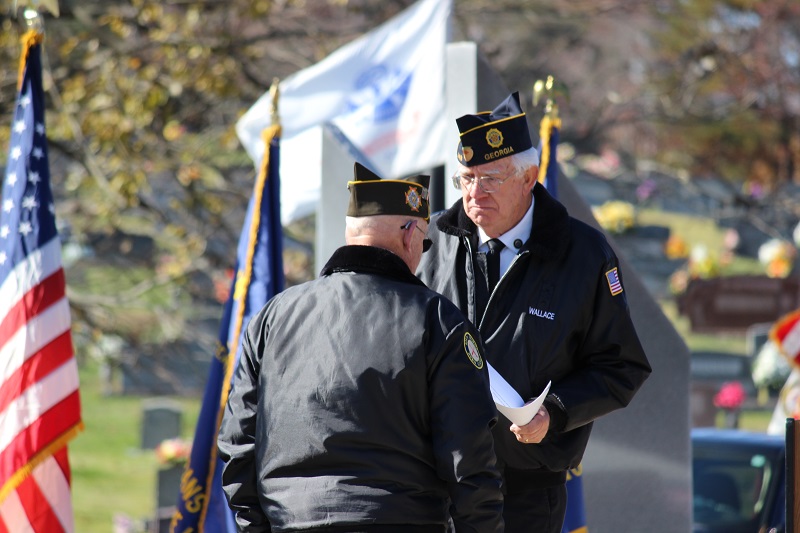 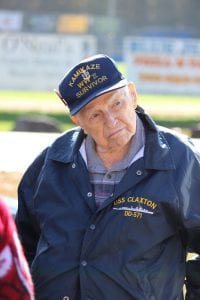 Nov. 11, 1918 marked the end of World War I. Armistice Day was created to remember those who fought in this great battle. World War I had been dubbed “the war to end all wars” but 100 years later we now have Veteran’s Day, in honor of the countless men and women who have served in our military through several conflicts up to present times.

Despite cold temperatures, families lined East Main Street as the parade passed by. Vehicles were adorned with American flags, as were the businesses downtown.

The parade marked a time of celebration of our veterans and what they have sacrificed for the continued freedom of our nation, but the memorial service marked a time to remember, a time to honor, and a time for military brothers and sisters to come together once more.

Flags were flown high at the Veterans Memorial Park. From left to right were the POW/MIA (Prisoners of War / Missing in Action) flag, followed by the different branches of our armed services in the order that they were authorized by Congress: Army, Navy, Marine Corps, Coast Guard, and Air Force.

“Always posted a little brighter and a little taller than the other flags” was the American Flag.

Representatives from the Capt. James Kell Chapter of National Society of the Daughters of the American Revolution presented a wreath at the ceremony: “In honor of all of those who could not be here with us today, who are being held prisoner of war, or those who are not accounted for.”

Engel acknowledged the veterans present at the memorial service and also took time to honor local police, firefighters, and first responders: “”I believe they are on the home front defending. They are some great guys and a lot of times they are not recognized for what they do for our country.” 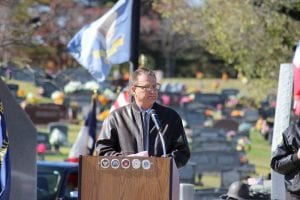 Speaking of the characteristics that define a veteran, Engle said, “Veterans are different. If you want to look at success in life, look at a veteran.”

Some of the areas that Engel highlighted as defining a veteran are honor, integrity, courage, loyalty, discipline, and selfless service: “Veterans understand that it’s not about them.”

“One of the most powerful things that a vet has is faith,” Engel said adding that faith means to serve instead of being served. Through faith Engel said comes the most important characteristic, love.

“Love for country. Love for family. Love for their brothers in arms,” all of this Engel says veterans have in common. “Success is not about some of the things of this world, but about how many lives you can touch. Successful people touch other people and they allow other people to have dreams of freedom to live in a free country.”