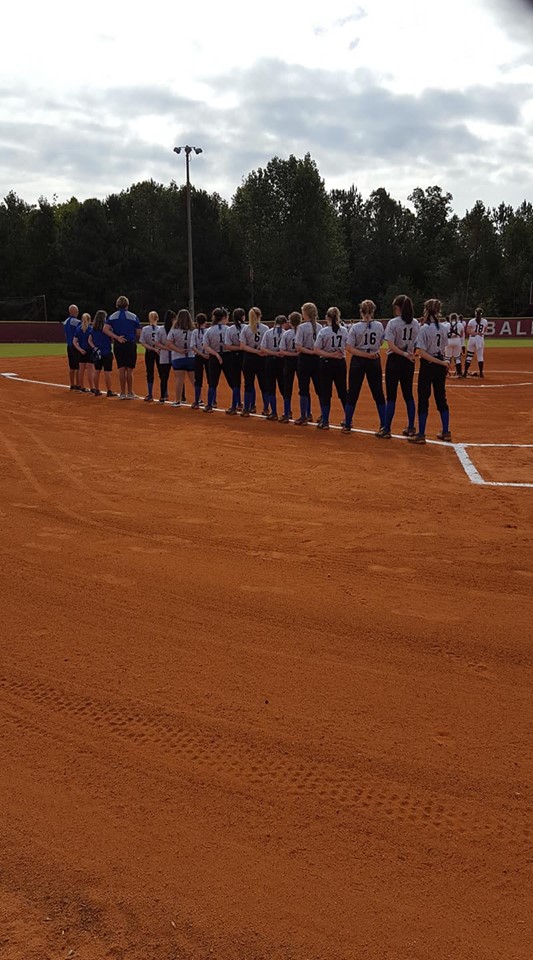 On 9/29, the Lady Rebels softball team traveled to Dawson County to kick off the region tournament. The teams would be playing a double header that day to determine who would move on to the playoffs. The steaks were high and both teams came ready to play.

For the first game of the day, Fannin started off batting. Dawson came out and got an early lead over Fannin where they put one run on the board just for the Rebels to tie it up in the second. It was an even game until the sixth inning where Fannin started to put the ball into action and added four runs to their score. Fannin had a great offensive game where they earned ten hits while Dawson earned seven. Senior, Macy Galloway, led Fannin in hits for the night with three over seven innings. Galloway was followed by seniors, Maleah Stepp and Alicia Jones who each had two hits for the game. All three of the seniors had an RBI for the game. Senior pitcher, Amelia Sneed, earned two strikeouts throughout the game and claimed the 6-3 victory over the Lady Tigers.

After a short break, the teams were ready to take on their second game of the day. This go around, Fannin would take the place as the home team and hit the field first. Both teams put up a fight on defense for three innings until Dawson was able to score one run in the fourth. The Tigers continued to score and Fannin responded in the bottom of the fifth with two runs. Rebel junior, Emily Waldrep, was the big hitter for the game with her two hits. Senior, Maleah Stepp, earned two RBI’s for Fannin and contributed to the score. Although Fannin out hit Dawson 8 to 7, the Lady Tigers walked away with a 4-2 victory over the Lady Rebels. With both teams winning one and losing one, they were matched up to compete at Dawson again the next Monday.

On 10/01, Fannin traveled back to Dawson County for their final game. The winner would be moving on into playoffs while this would be the losers last game. The coin toss before the game determined that Fannin would once again take the spot as the home team and take the field first. Fannin was ready for a game like the last when Dawson’s hitting came alive. After so many games against the same pitching, both teams started to adjust at the plate and made things happen. The Lady Tigers were hitting the ball in all of the right places and putting runs on the board while Fannin was still trying to adjust to their offense. The Lady Rebels started to hit in the bottom of the third and managed to get one run on the board before Dawson closed out the inning. Senior, Macy Galloway, earned three RBI’s throughout the game and added to Fannin’s score. Both teams had a perfect defense by not allowing any errors in the field. Amelia Sneed, pitched a great game for Fannin by earning two strikeouts. It was a high hitting game where Dawson County out hit Fannin 15 to 12. Despite both teams hustle and heart, Dawson County walked away with a 7-5 victory over Fannin. The Lady Rebels had a great season where they kept improving from the beginning and finished with an overall record of 11-15.