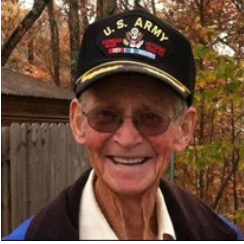 Mr. Parker was born in Detroit, Michigan, a son of the late Newman J. Parker and the late Laura Pickelsimer Parker. Jack was a veteran of the U.S. Army and achieved the rank of Staff Sergeant, and served in Korea. Jack was a member of Blairsville’s Kiwanis Club and the Union County Retired Educators. Besides his parents, Jack was preceded in death by a daughter, Martha Caroline Parker Barnard; a brother, James Earl Parker; and a sister, Barbara Colwell.

Funeral services have been scheduled for Saturday, October 6th, 2018, at 2:00 p.m., to be held in the Chapel of Cochran Funeral Home of Blairsville, with Pastor Jerry Helton officiating. Burial will be in Union Memory Gardens Cemetery. The following gentlemen have been selected to serve as pallbearers: Chris Parker, Justin Collins, Mike Parker, Parker Daniels, Coleson Daniels, Lucas Parker, and Gary Kendall. Members of Blairsville Kiwanis Club are asked to serve as honorary escort for the family. Military honors will be presented by North Georgia Honor Guard.

In lieu of flowers, the family has suggested that memorial donations be made to Union County Retired Educators.

Arrangements have been entrusted to the care of Cochran Funeral Home and Crematory of Blairsville. Please sign the online guest registry and share your condolences with the family online at www.cochranfuneralhomes.com.