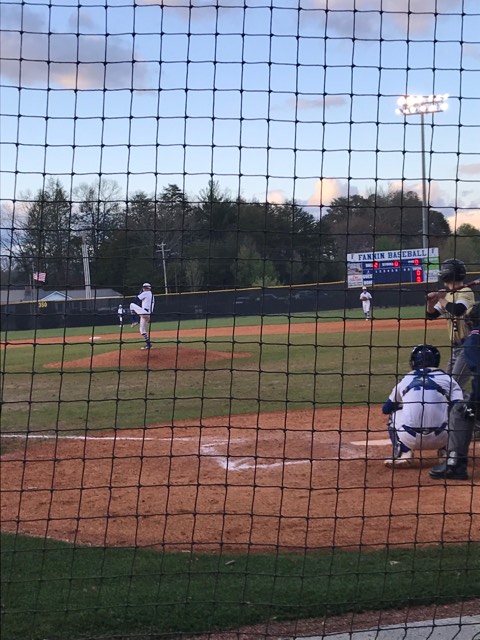 Last night, the East Hall Vikings traveled to Fannin County to take on the Rebels in a double header. The Vikings were looking to redeem themselves from their 7-3 loss in the first game while Fannin was hoping to continue their winning streak.

Senior, Grant Baker, started off the game on the mound. Baker pitched a total of six innings where he walked four batters and struck out three. Fannin had a perfect inning of three up and three down outs on defense. The Rebels attacked the plate and got their lead early in the game. Miles Johnson got things started for Fannin and hit a ground ball to left field, making it to first base and bringing in a run. Blake Rogers continued his great night of batting by hitting a bomb to center field, advancing to second base, and bringing in two more runs for Fannin. The Rebels wrapped up the first inning with a 3-0 lead over East Hall.

The Rebels were on top of their defense with another perfect inning of three up and three down outs. At the bottom of the second inning, East Hall started making mistakes on defense. Johnson stepped up to the plate and put the ball into action, ready to bring Chandler Kendall home. Johnson advanced to second after an overthrow to first base while Kendall went on an overthrow to home and was safe after very close call at the plate. Kendall’s run put the Rebels in the lead 4-0 over the Vikings at the end of the second inning.

In the third, fourth, and fifth innings, East Hall fought to get one point on the board while the Rebels did the same. Fannin started to make mistakes on the field in the third inning, resulting in East Hall to get a run on the board. However, Fannin came back and redeemed themselves by claiming one more run on offense. The score remained at 5-1 with Fannin in the lead until the top of the sixth inning.

Rebel sophomore, Gabe Buchanan, proved to be an asset on defense at third base with his diving catches and great outs. Miles Johnson had his best moment of the night in the bottom of the sixth inning. With Kendall on second base, Johnson hit a ball out of the park, putting two more runs on the board. Fannin finished the sixth inning with a score of 7-1 against East Hall.

At the top of the seventh inning, Chandler Kendall came to the mound as a relief for Grant Baker. Kendall closed out the game with one walk and two strikeouts. The Vikings put more runs on the board, putting the final score of the night at 7-4. East Hall’s efforts were not enough to catch up to Fannin before Kendall threw his third strike, finishing the game.

Fannin’s win puts their overall record at 10-10 while East Hall stand at 10-8. Catch the Rebels next game on Tuesday, April 3, as they travel to take on Lumpkin County at 5:55!