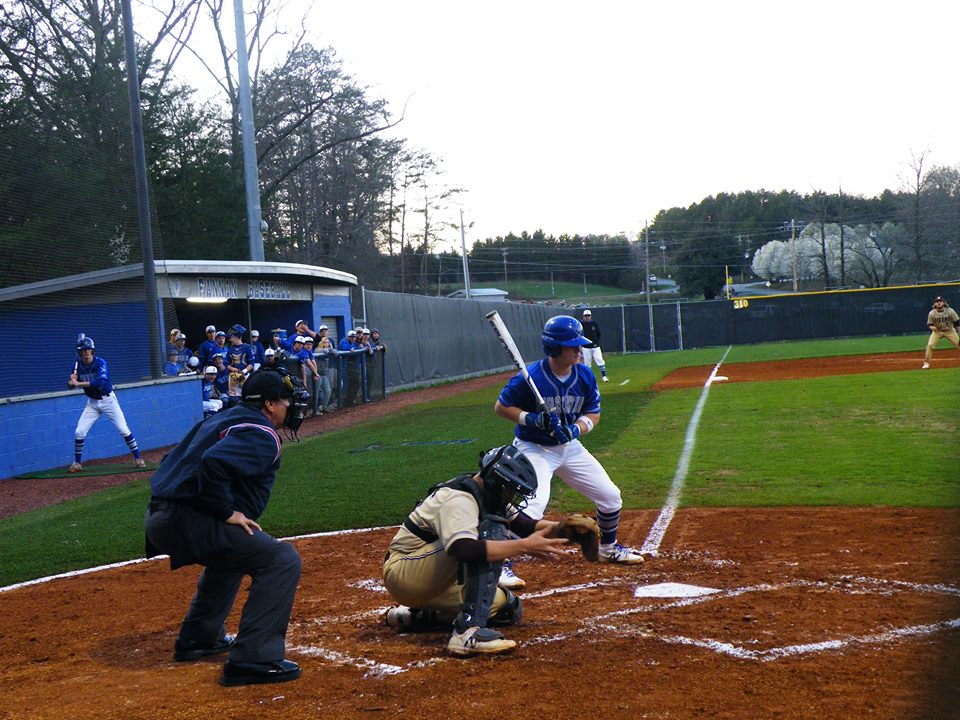 The game was off to a slow start this past Tuesday as the Fannin Rebels took on the Dawson County Tigers at home. Although the Rebels didn’t start off with intensity, they made up for it towards the end of the game.

Pitcher for the Rebels, Garrett Rogers, allowed only one hit in the first inning which was shut down by second baseman, Tyler Norton, with a jumping catch. At the bottom of the first, Jack Gobble stepped up to the plate, hitting a ball to right field and advanced to second base. The Tigers made their third out before Gobble could reach home, leaving the score tied at 0-0.

The Rebels continued their attempts to make it to home plate and were slowly making progress. Dawson county started to make errors on the field, allowing the Rebels to get on base. Rebel, Carson Beavers, hit a line drive to center field and loaded the bases for Fannin. With scored points being in the Rebels reach, the Tigers made their third out of the second inning, keeping the score at 0-0.

There were no points on the board until the fifth inning of the game. The Rebels started to make mistakes on defense, resulting in points for the Tigers on offense. At the bottom of the fifth, Fannin found themselves struggling to put the ball into play. They were unable to make their way to home plate, putting the Tigers in the lead 3-0.

The Rebels put in pitcher, Gabe Buchanan at the top of the sixth inning. Buchanan pitched two-thirds of the inning where he walked one batter and struck out two. Dawson added two more points to their score as the sophomore was pitching, resulting in senior, Grant Baker, to come in and pitch for the Rebels. As Baker pitched, Dawson added one more point to their score. Something sparked in the Rebels as they went up to bat. Rebel, Blake Rogers, started the action by hitting a bomb to left field, resulting in a double. It was a domino effect from there when Miles Johnson hit a ground ball to right field, bringing Rogers home and putting their first point on the board. Jack Gobble approached the plate with determination and hit the ball in the gap between center and right field, bringing in two more runners. As the Rebels increased their intensity, their score did the same. The Tigers still had the lead at the end of the sixth inning with a score of 6-4.

Fannin was determined to keep the Tigers from scoring in the seventh and final inning and that is exactly what they did. The Rebels had a quick three outs and were ready to start hitting. Blake Rogers started things off for the Rebels once again when he hit a ground ball to the shortstop who then overthrew first base, advancing Rogers to second base. Miles Johnson then hit a ground ball to second base, advancing Rogers to third and sacrificing himself as the first out of the inning. Grant Baker stepped up to the plate and followed the trend by hitting a grounder to center field, advancing to first base and bringing Rogers home. Garrett Rogers continued the streak by laying down a beautiful bunt on the third base line, advancing himself to first base and advancing Baker’s courtesy runner, Cody Jacobs, to second. Carson Beavers watched the ball with intent and ended up being walked by the pitcher, loading the bases once again. Chandler Kendall sacrificed himself as the second out of the inning by hitting a fly ball to center field where it was caught and Jacobs scored. Gabe Buchanan wrapped up the game with a hard line drive to left field, bringing in the winning run, putting the Rebels in the lead 7-6.

Despite Dawson’s hard work at the beginning, the Rebels comeback proved to be to great to overcome. Fannin’s win put their overall record at 6-3. Catch the Rebels next game on Tuesday, March 13, as they travel to take on North Hall at 5:55!