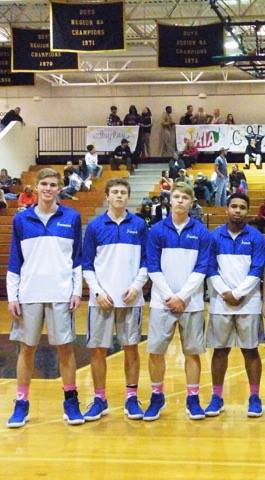 Last Tuesday, the Fannin Rebels traveled to East Hall to take on the Vikings for the first round of the region tournament. The Rebels had played the Vikings the game prior to the matchup and were ready to redeem themselves from the tough loss they endured.

Even though the Vikings beat the Rebels just a few days before, that did not stop them from trying again and giving the game all they had. Rebel, Payton Holt, led his team in scoring with sixteen points by driving the lane. Viking, Luke Cooper, led his team in scoring with twelve points. The Vikings had the lead at the end the end of the first quarter with a score of 30-16.

The Rebels found that East Hall’s heavy defense had not let up any since their previous game, and found ways to get past it. Fannin had good looks up to the court to Chandler Kendall who added seven points to the score with his scrappy playing. Joe Satchell got after loose balls and contributed three points for the Rebels. The Vikings had a 54-31 lead over the Rebels going into halftime.

With East Hall double teaming the Rebels on defense, Fannin started to pass the ball around to create open shots. Rebel, Jack Gobble, contributed nine points for his team with outside shots. Cohutta Hyde followed the trend and added four points to the Rebels score. Even with the Vikings unstoppable outside shots, the Rebels played with spunk. East Hall extended their lead over the Rebels at the end of the third quarter with a score of 66-39.

Even though the Vikings had steal after steal, the Rebels started to rebound which resulted in more points. Rebel post, Ryan Beavers, added five points to Fannin’s score with his aggression down low. Nathaniel Garrison and Joel Kinser both scored four points each for the Rebels from the block. East Hall finishes the night with a 78-52 victory over the Rebels, wrapping up Fannin’s season.

The Rebels loss puts their overall record of the season at 4-21. Fannin might not have have gotten all the wins they wanted to, but this is a team that has worked hard and improved so much since the start of the season. They have never given up and they put their all into every single game.