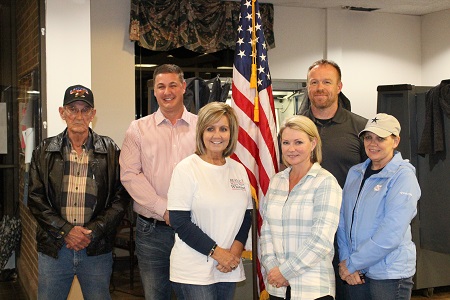 Following this, the council approved the rehire of Roy Parsons to the temporary position of administrator of Land Development and Zoning. Parsons unexpectedly resigned the same position last year. Councilman Nathan Fitts abstained from voting citing he was undecided. “I’m not opposed. I just haven’t made my mind up since it’s a temporary position,” Fitts explained to Mayor Donna Whitener.

According to City Clerk Kelsey Ledford, Parson’s position is temporary as the city seeks to find a permanent administrator of Land Development and Zoning, and Parsons is expected to assist with that search.

Next, the council voted to proceed with advertising and conducting subsequent interviews for an additional full-time officer for the Blue Ridge City Police Department. “The police officer was requested by (Chief) Johnny Scearce and (Capt.) Rob Stuart. We have a shift that is not filled,” Whitener explained.

The council also promoted Kim Keenan from assistant supervisor of the city park to supervisor of Parks and Recreation Department.

Earlier in the meeting, the council held a first reading of an amendment to the city’s alcohol ordinance. Councilwoman Rhonda Thomas-Haight explained the three changes that the amendment proposes will address employee permits, ownership conflicts and pouring regulations.

The amendment would establish that employee permits will be valid for one year from the date of issue and renewal of the permit will occur upon submission of the renewal application and payment of the appropriate renewal fee, which will be no less than $30, provided that the person remains qualified for renewal. The amendment also would prohibit any city council member holding any beneficial interests in an establishment that has obtained an alcohol license from the city from voting on any matter involving the given establishment. Lastly, the amendment allows for establishments to have specials, such as happy hour specials, on poured alcoholic beverages.

The council approved the first reading of the amendment with Fitts abstaining citing a potential conflict of interest.

A change order for a previously approved shoulder erosion repair project on Trackside Lane was also approved in the public session of the meeting. The project will now also widen the roadbed of Trackside Lane in an area that Whitener described as “dangerous,” being only 16.5 feet wide and not wide enough for two vehicles to pass.

The cost of the additional widening work will be $15,580 and the cost of the original erosion repair project is $8,800. Whitener explained that funding for the original project will come from Federal Emergency Management Agency (FEMA) while the additional widening work will be paid through Special Purpose Local Option Sales Tax (SPLOST) funds. Whitener also told council members the shoulder work had been delayed as the city awaited final approval to proceed with the project from the Georgia Department of Transportation (GDOT). “We finally got approval to move forward,” Whitener stated.

Johnson Paving has been awarded the bid for both projects.