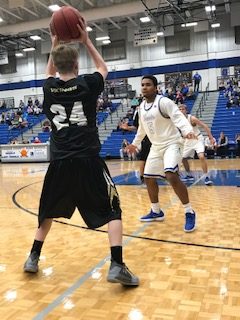 The East Hall Vikings traveled to Fannin County High School this past Tuesday to take on the Rebels. Both teams were looking to redeem themselves from devastatingly close losses prior to the matchup at Fannin.

The Rebels started off the game strong. Everyone was working together to get the ball into scoring position. Fannin was playing the best quarter of their whole season at the start of the game. Rebel, Payton Holt, led Fannin in scoring with fourteen points. Number forty for the Vikings also led his team in scoring with fourteen points. The Vikings had a 20-10 lead over the Rebels at the end of the first quarter.

There was a change in the Rebels momentum at the start of the second quarter. As the Vikings lead got larger, the Rebels intensity lessened. The Rebels had good looks and passes inside to Joel Kinser who contributed six points for Fannin. Nathaniel Garrison also added six points to Fannin’s score with his rebounds. Jack Gobble had a great game above the key by putting six points on the board for Fannin from two three pointers. Going into halftime, the Vikings had a 41-22 lead over the Rebels.

While East Hall took outside shots to score the majority of their points, Fannin drove the lane. Joe Satchell added four points on the board for the Rebels with his speed by flying past the defense. Chandler Kendall contributed five more points to the Rebels score with his aggressive playing. East Hall showed no mercy on Fannin at the end of the third quarter with a score of 79-41.

A new group of five went in at the start of the fourth and gave it their all. Everyone on the floor put their heart into the game. Freshman, Brady Martin, got to go into the game and make a shot from above the key, putting three more points on the board for Fannin. Rebels Cohutta Hyde and Gabe Buchanan got after it and hustled the whole time they were on the court. Chase Culpepper added three points onto the Rebels score with his powerful ball handling skills. Jalen Ingram played aggressive on the block by drawing fouls and contributing two points for the Rebels. Despite the Rebels valiant effort, the Vikings took away a 90-49 victory.

The Rebels loss puts their overall record at 2-15 while the Vikings stand at 8-7. Catch the Rebels next game on January 12 at 8:30 as they travel to take on Union County!