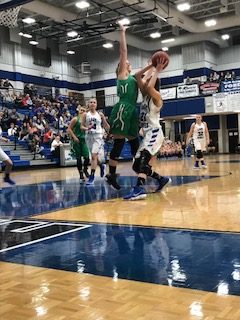 This past Saturday at the Mountaintop Holiday Classic, the Pickens County Lady Dragons traveled to take on the Fannin County Lady Rebels for the third and final day of the tournament. Both teams were coming from wins the games prior to the matchup and ready to battle it out in the championship game.

The intensity came alive at the very start of the game. The Lady Rebels relied on plays to get open shots while the Lady Dragons did most of their damage driving the lane. Savada Collins led fannin in scoring with fifteen points due to her never ending hustle. Lady Dragon, Mykenzie Weaver, led Pickens in scoring with twenty-three points. At the end of the first quarter, Pickens had a one point lead over Fannin with the score at 9-8.

Fannin’s outside shooting came alive in the second quarter. Lady Rebels Maleah Stepp and Morgan Patton each scored three points to add onto Fannin’s score. The Lady Rebels had good looks inside which resulted in Hope Franklin’s twelve points. Makenzie McClure also had a good game on the block by putting five more points on the board for Fannin. Lady Rebel, Bailey Whitener, got after it and contributed four points for her team. The Lady Dragons kept their lead over the Lady Rebels at the end of the second quarter with a score of 23-19.

The Lady Rebels ran into foul trouble in the third quarter. The Lady Dragons fouled Rebel Mackenzie Johnson who scored an overall two points for Fannin. With the tension being high, Maddie Johnson stood up for sister and gave a foul right back to the Lady Dragon. Both players received a technical foul and were benched for the rest of the game. The Lady Rebels received a second technical foul on assistant coach, Joe Breeden. Even with all of the fouls in the quarter, the Lady Dragons had a 37-30 lead at the end of the third.

When asking Lady Rebel head coach Suzianne Pass her thoughts of her teams overall performance in the tournament she stated, “I am very proud of how hard all of the girls played. They played with a little bit of spunk. They didn’t quit, they didn’t give up, they did not shy away, and that is what I expect from them every single game. I am very proud of our performance tonight and how much we have improved from the first time we played Pickens when they beat us 53-29. Pickens is a very good team who I respect a lot and I don’t think they were expecting us to play as hard as we did.”

Coach Pass also shared which of her players stood out the most to her with the FYN sports team. “Every kid I put out on the floor stood out to me. I wish i could’ve given them all an All Tournament medal because they all deserved it. Maleah Stepp played amazing and Maddie Johnson played hard. Reagan Henderson and Bailey Whitener came off the bench and did exactly what they were supposed to do by giving us good minutes and saving us. Makenzie McClure played hard and is getting better and better each game. Savada Collins stepped up and played better than she has ever played. Mackenzie Johnson just being a freshman has not been playing like a freshman. She has just been getting better and better. It was Morgan Patton’s first game back tonight with her ankle still killing her but she stepped up and played hard. We have had several players coming back from sickness who have shaken it off and gotten after it.”

Before the Lady Dragons claimed their first place trophy, Fannin received their medals for All Tournament Players. The three Lady Rebels selected for this award were Maleah Stepp, Hope Franklin, and Maddie Johnson. Savada Collins was chosen for the MVP award.

The Lady Rebels loss puts their overall record at 7-7 while the Lady Dragons stand at 11-2. Catch Fannins next game on January 5 at 7:00 at home as they take on GAC!