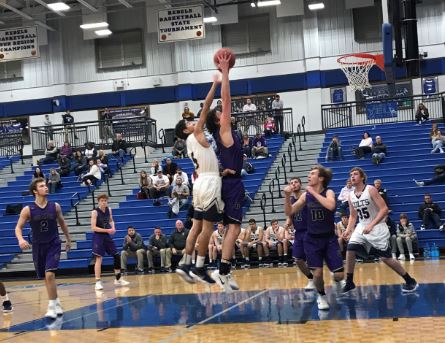 This past Thursday at the Mountaintop Holiday Classic, the Gilmer Bobcats took on the Coahulla Creek Colts at Fannin County High School. Both teams were battling to redeem themselves from their lost games prior to the matchup at Fannin County. The Colts did not come to “horse around”, they put their all into the game and the Bobcats did the same.

During the first quarter of the game, Gilmer relied heavily on inside passes for shots under the basket which was how they scored the majority of their points. This allowed Bobcat, Kell Weaver, to be the main man inside throughout the game and lead Gilmer in scoring with twenty-five points. The Colts did most of their scoring from the outside thanks to their point guard, Maddox Adams. Adams led his team in scoring with twenty-eight points overall. Although the teams had different methods of scoring, it didn’t mean that one was better than the other. As the buzzer sounds for the first quarter to end, the Gilmer Bobcats and Coahulla Creek Colts were tied with a score of 14-14.

Both teams were fighting for the lead as soon as the second quarter began. The Bobcats gained more confidence in their shooting and started making outside shots. Bobcat, Tyler Sims, contributed twenty points for Gilmer with his outside shots. Another Bobcat, David Smith, followed the trend by scoring a three point shot for his team. Bobcat number two, Carter Hice, started driving the lane and put eight more points on the board. Gilmer took the lead over the Colts after the second quarter with a score of 30-24.

With the Colts making fakes left and right, Gilmer also found an opportunity for more points. The Bobcats had the determination to look up the court and see the open lane as a perfect chance for layups. Bobcat, Coady Cobb, had the speed to make the layups and contribute six points for Gilmer. Another Bobcat, Austin Daman, contributed four more points to put on the board for his team. Gilmer doubled their lead over the Colts at the end of the third quarter with a score of 46-34.

Although the Colts lead strayed farther from the Bobcats, they were not giving up. Both teams started getting after it on defense and drawing fouls. Towards the end of the game, Gilmer started driving the defense inside, leaving teammates on the outside open where they would score more points. The Colts proved to have outstanding determination and hustle by going after loose balls and getting steals on defense. However, it was not enough for them to trot away with a win. Being the last game of the night, the Gilmer Bobcats closed out the first day of the tournament with a 66-54 win over the Coahulla Creek Colts.

The Bobcats win puts their overall record at 4-8 while the Colts stand at 3-7. Catch the Gilmer Bobcats next region game on January 5 at 8:30 as they travel to take on Northwest Whitfield!