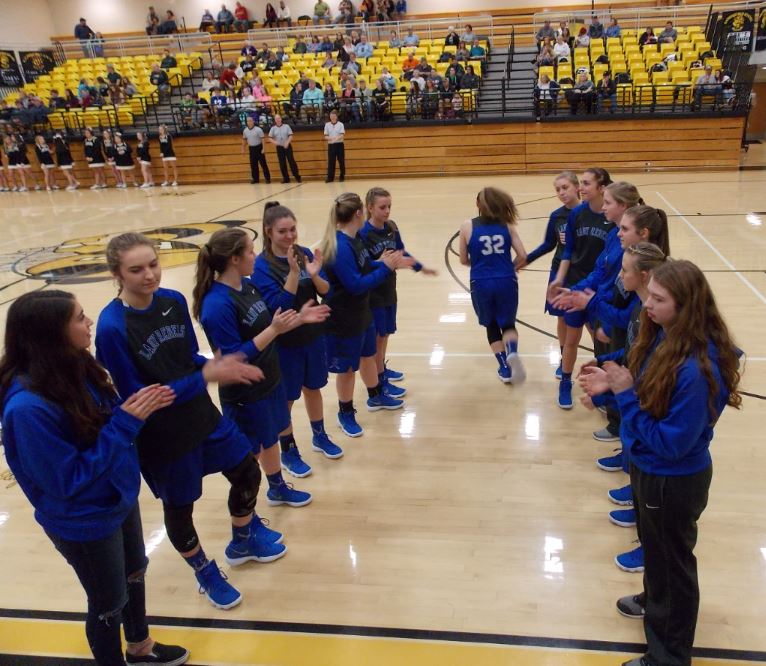 During the first quarter, the Lady Rebels were struggling with defense and communication. The Lady Jackets took advantage of the Rebels miscommunication by driving the lane and scoring outside shots. With the Rebels finally getting the hang of how to put up a fight against the Yellow Jackets, Hayesville ended the first quarter with a lead of 14-6.

Something sparked in the Lady Rebels between the end of the first quarter to the beginning of the second. It looked like the Rebels were a new team when they took the court to begin the second quarter. The Lady Rebels started playing aggressive by driving the lane to score points and taking charges to prevent the Lady Jackets from expanding their lead. Lady Rebel post, Makenzie McClure, led Fannin in scoring with nineteen points. Another Rebel at the post position, Hope Franklin, was right behind McClure with eighteen points. However, the Lady Jackets did most of their damage from the outside. Yellow Jacket number 3, Savanna Annis, was on fire above the key and led her team in scoring with 23 points due to her ability to make three pointers. Annis made four three point shots throughout the night, this included a buzzer beater that she made at the end of the second quarter which put the score at 28-21 going into halftime with the Yellow Jackets still in the lead.

As the third quarter carried on, the Lady Yellow Jackets lead grew farther from the Lady Rebels score. Although the Lady Rebels fell behind in points, that did not stop the team from battling to make a come back. Lady Rebel, Mackenzie Johnson, started drawing fouls and contributed one point from a made foul shot. Another Rebel, Savada Collins, was an asset to Fannin’s defense by getting steals throughout the game and contributing two points for her team. With the end of the third quarter ending, the Lady Yellow Jackets had a 41-32 lead over the Lady Rebels.

The Lady Rebels intensity came alive at the start of the fourth quarter. Fannin wanted to desperately make a come back and it showed through their hustle. The Lady Rebels started putting heavy defensive pressure on the Lady Yellow Jackets which resulted in more fouls called on both teams. As the Lady Rebels score got closer to the the Lady Yellow Jackets, fans from both teams started fighting every call that the referees made. Despite Fannin’s force at the very end of the game, they endured a loss to Hayesville with a score of 57-55.

The Lady Rebels loss to the Lady Yellow Jackets puts Fannin’s overall record at 5-6 while Hayesville stands 6-3. Fannin County High School will be hosting the Mountaintop Holiday Classic on December 28-30 where you can catch the Lady Rebels next basketball game.