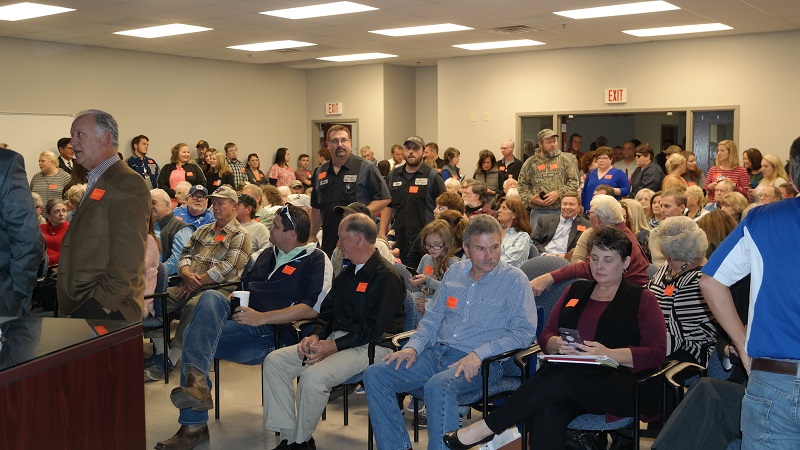 BLUE RIDGE, Ga. – The crowd spilled into the hall outside the Jury Assembly Room of the Fannin County Courthouse for a town hall meeting addressing a potential Homestead Property Tax Exemption for seniors Thursday, Nov. 16, as hundreds attended, mostly to oppose the exemption.

The change would exempt Fannin property owners 65 and older from paying the school property tax.

The meeting began with brief addresses from Georgia House Speaker and Fannin County resident David Ralston and Georgia State Senator Steve Gooch who were present to hear arguments for and against the exemption. 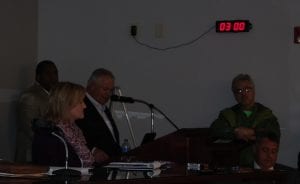 Ralston explained the exemption would have to pass with a two-thirds majority vote in both the Georgia House of Representatives and State Senate before being placed on the ballot for the 2018 Fannin County General Election. The speaker added neither he nor Senator Gooch had come to a position yet concerning the potential change for Fannin taxpayers.

Senator Gooch told of his experience with the exemption during his tenure as Sole Commissioner of Lumpkin County. “I warned people at the time that there were good and bad consequences to legislation like that, and I hope whatever happens here in Fannin County, people will get the facts before they make their decisions on whether they support something or not support something.”

Gooch stated he was not in favor of property taxes and would like to see a shift to a consumption tax to allow property tax relief for all taxpayers. The senator also stated, “Every time you create an exemption for any kind of a tax, you’re shifting the burden to everyone else that’s not getting these exemptions.” 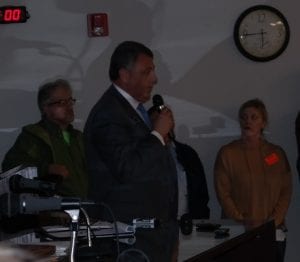 Following Gooch was Blake Doss, policy analyst for the Georgia House Budget and Research office. Doss gave a short presentation and told that Fannin has a population of 6,523 age 65 and older, which accounts for approximately 26 percent of the county’s total population of 24,985. Doss also said the local school system received $18,501,250 (55 percent) of its 2016-17 revenue from property taxes while the remainder derived from state and federal funding.

Doss estimated a senior tax exemption would shift the burden to 40 to 45 percent of the county population. Later, Doss also said 33 to 35 percent of the county’s population would fall under the exemption eligibility in the next few years. He further stated the county currently has two tax exemptions in place available for seniors. One such exemption, Doss said, gives taxpayers 62 and older an up to $30,000 exemption of their 40 percent assessed property if they meet income qualifications. Another, again based on income qualifications, provides a property valuation freeze for taxpayers 70 and older.

The overwhelming majority of citizens in attendance opposed the issue as evidenced by wearing bright orange stickers reading “Support Education.”

Among those, Rita VanOrsdal stated, “Without adequate funding, schools will send (students) out less prepared … I believe that cutting my age group’s taxes will do nothing but denigrate the quality of education of those coming after.”

Mike Queen, former Fannin School Board chairman, said he understood both arguments concerning the issue but added the exemption would put a burden on younger taxpayers and families. “I pay a hefty tax … Every dollar I spend on education is an investment in the future of this county,” Queen said.

Current Fannin School Superintendent Dr. Michael Gwatney informed the audience Fannin County spends more per capita on students -$10,923.20 per student – than the state average – $9,020.46 – despite having the sixth lowest school millage rate in the state (11.23 mills). According to Gwatney, the state average for school millage rates is 16.36 mills. Gwatney estimates Fannin County Schools would lose $1.4 million dollars annually if the exemption is passed.

“Education is an investment, and it’s a good investment,” Gwatney said.

Gwatney also alluded to the struggles Gilmer County Schools have had since that county instituted a similar exemption in recent years. “History has a tendency to repeat itself. The showing in this room tonight does not want to repeat the history of Gilmer County,” Gwatney said.

Chief Executive Officer of Fannin Regional Hospital David Sanders also opposed the exemption and explained that the exemption would affect more than just the school system. Sanders stated during his seven years as CEO of the hospital he has recruited over 25 new physicians.

“Every time I recruit a new physician here, the first question they ask is ‘What’s the school system like?'” Sanders said. “And every time it is a privilege to be able to say we’ve got one of the best public school systems in the country.”

Among those in favor of the senior exemption was Fannin County citizen Jim Klack who explained he had lived in Fannin for over 20 years and in that time has paid approximately $100,000 in school taxes. Klack added he currently pays $500 a month in school taxes.

To this, Speaker Ralston told the lady he had sent out personal letters over the last two weeks to supporters of the exemption for whom he had contact information, inviting their attendance and participation, and also sent out proper notifications to newspapers informing all residents of the meeting.

In a follow-up interview with Ralston, the speaker described the meeting as “very helpful and very spirited” and said he saw “intense feelings on both sides of the issue.”

“There are certain issues that a community needs to have a discussion about,” Ralston said, “and this meeting helped me to gauge the sense of the community on this exemption.”

The speaker added that he and Senator Gooch would take their time to digest what was said at the town hall before moving forward with the senior tax exemption.

Continue to follow FetchYourNews for more on the status of the senior tax exemption.