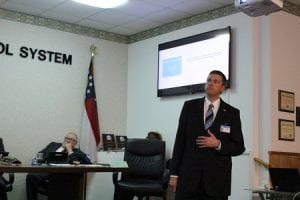 An upcoming Town Hall is scheduled for Thursday, Nov. 16, 2017, at 5:30 p.m. This meeting will take place in the Jury Assembly Room of the Fannin County Courthouse.

State Representative David Ralston and State Senator Steve Gooch will be present to hear arguments from both sides.

If representatives decide to move forward, the possible Senior Homestead Exemption would have to be approved by the 2018 session of the Georgia General Assembly and then would be decided by Fannin County voters in the 2018 general election.

Dr. Gwatney addressed the board and residents present at the November 9 Board of Education meeting.

This large portion of the population, if passed, could account for schools in Fannin County losing up to $1.4 million annually. 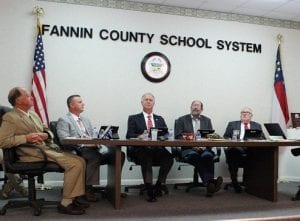 Board of Education members listen to Dr. Gwatney’s presentation.

Gwatney pointed out that, “The only generation that will benefit from the exemption is the one that will be exempt now; all other generations will pay more taxes.”

A similar exemption passed in Gilmer County. Dr. Gwatney showed that after the exemption was passed, it had a negative effect on the area. The millage rate increased to account for the loss, putting a heavier burden on those not exempt from the tax.

Gwatney also cited that Gilmer experienced furloughs and a closing of a school. He stated that the citizens of Gilmer County “paid more for less.”

According to the Georgia School Superintendents Association, the current average millage rate for schools in Georgia is 16.36. Fannin County’s school millage rate sits at 11.23.

Gwatney stated, “This board has shown consistent, conservative leadership in respect with people’s money.”

Dr Gwatney concluded, “My opportunities here were possible due to the effort of the previous generation.”

He added that this is “my opportunity to stand up for our next generation of Fannin County.”