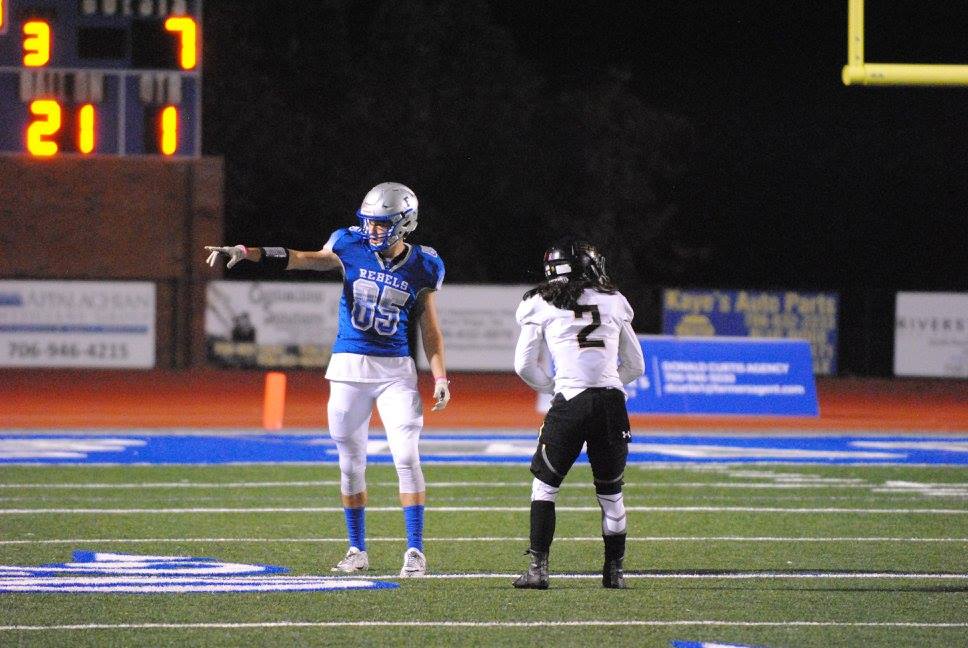 Moments of greatness:  If one were to summarize the Fannin Rebels’ 2017 football season, the highlight reel would be short – but spectacular.  The Rebels, who finished last in Region 7 (AAA) this season, played hard and if we could shut the lights of the scoreboard off; we would see a team of resilient young men who wore their jerseys with pride and refused to quit.

Unfortunately, the scoreboard acts as a report card, and with the exception of two blowout victories; the Rebels were unable to pull it all together and produce the dominant victories for which the program is remembered.

Friday night’s home game would be the last for the senior class of 2018 – many of whom leave some large cleats to fill for the underclassmen.  Rather than give you the typical play-by-play rundown, here is a basic summary of the play of the seniors in Friday night’s matchup:

Senior Cody Jacobs carried the ball like a juggernaut, determined to get the running game going for the first time in weeks. 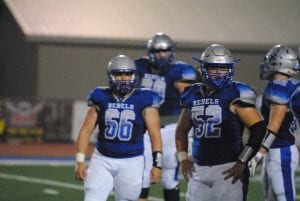 Fannin senior linemen Bradley Flowers (66) and Keenan Putnam (52) have played alongside one another since they were in elementary school.

Senior linemen Bradley Flowers and Keenan Putnam took turns shoving Viking facemasks to the turf.  When the play was over, they helped them to their feet so they could do it again.

Austin Brown hit ’em high, Cole Earls hit ’em low, and Brett Galloway just hit ’em as hard as he could… like he has throughout his entire football career.  Dawson King hauled in the impossible catches, Chandler Smith threw the impossible passes, and Jonah Henry just did everything he could to get his hands on the football to help.

Ethan Smith continued to fight a nagging leg injury, while Sam Mercer and Ben Collins kept the team focused on the game and what they all came to do.  Clay Holloway made sure the Vikings remembered his number.

Bailey White tried to cover his number so the offense would actually throw the ball in his direction.  Luke Cowart covered his number, too, with his arms wrapped around the football.  Jacob Hood showed his versatility, and the Fannin County coaches showed patience and resolve.

It takes a special athlete to take a beating and keep coming at your opponent.  It also takes a special coach to take the responsibility of basically turning our boys into men, building their character from the early morning hours through the hot-humid afternoons of summer workouts, and handling criticism with the same poise and professionalism they’ve instilled in the very athletes they train.

East Hall defeated Fannin County by a final score of 47-27 Friday night, but the lesson trumps the loss.  If the Rebels live their lives with the same ambition, attitude and persistence they gave on the field this season; we can expect they will be champions at life.