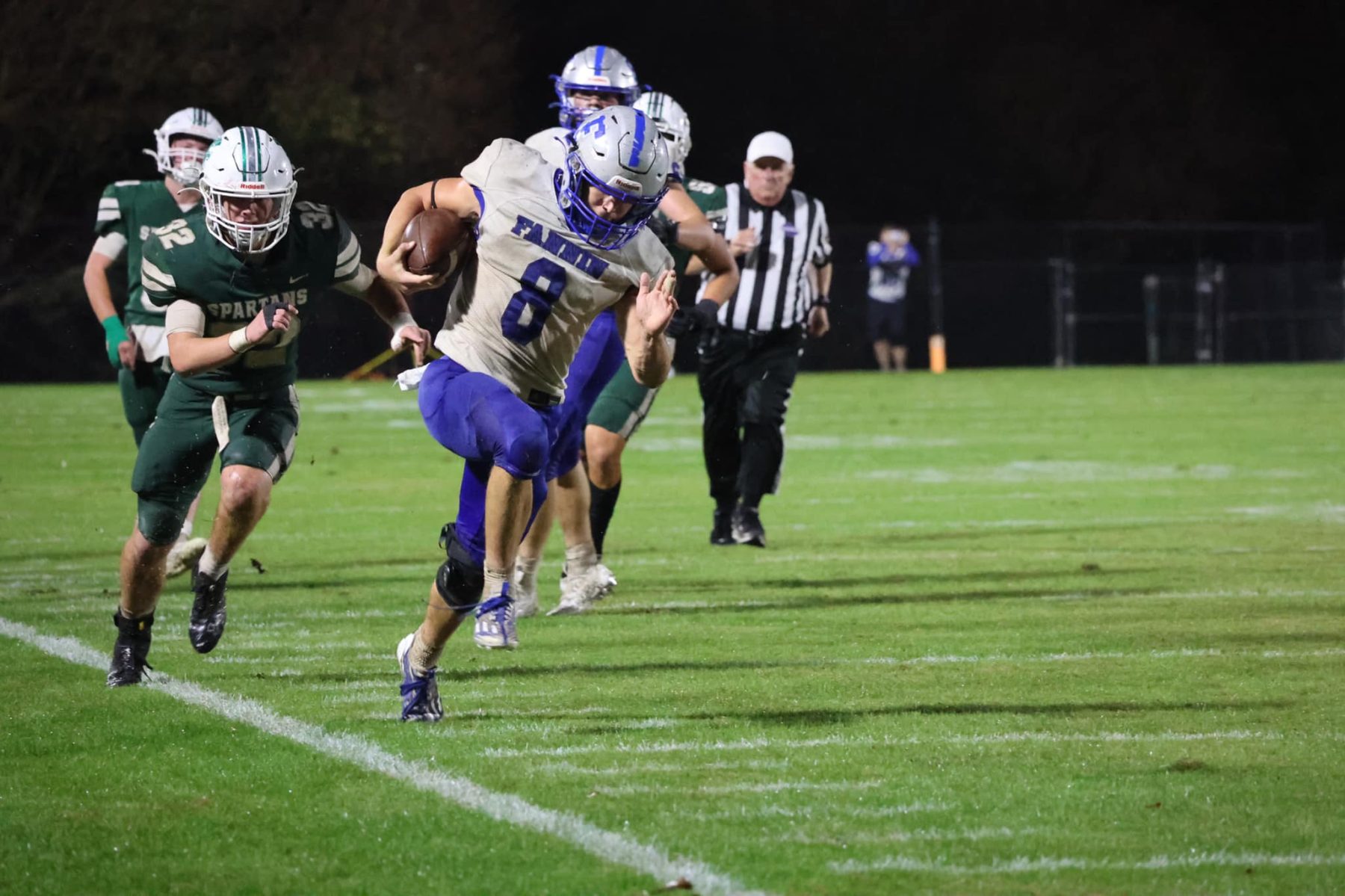 B-E-L-I-E-V-E. Believe. That’s been the motto for the Fannin County Rebels Football team this season. Fannin County knocked off 8th Ranked Athens Academy on Friday Night in the 1st Round of The GHSA AA State Playoffs 28-13.  The Victory was the Team’s 1st Road Playoff Win in School history.

Fannin County entered the game as the 3 seed out of region 7AA and Athens Academy entered the contest as the 2 Seed in Region 8 AA.

The Cal Preps and Massey Ratings had Fannin County had Fannin anywhere from a 10 Point – 15 Point Under Dog coming into the matchup. Athens was also ranked #8 in the State by Max Preps.

Fannin won the toss and elected to receive. The 1st drive didn’t go well for Fannin has Athens Academy forced Fannin to a quick 3 and out. Athens Academy had a nice drive on their 1st possession and scored from 1 yard out on 3rd and goal to take a 7-0 lead.  Fannin County responded quickly as Corbin Davenport found paydirt for the 1st time on the night. Jack Kanter added the extra point as the Rebels tied it up with 1:12 in the 1st. 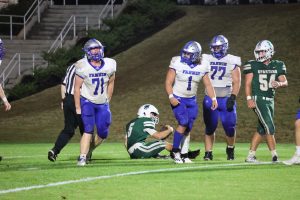 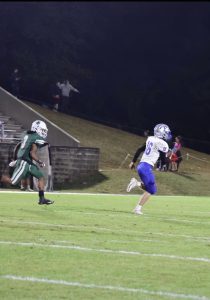 Carson Collis Running after his Reception. Collis had 49 yards on the night

Opening play of the 2nd Quarter on 3rd Senior Captain Jermey Tammen plowed through the Spartan offensive line and got a sack that almost resulted in a safety. The Spartans would punt, and the Rebels would take over in great field position. Bryson Holloway gained some yardage on a few runs for the Rebels and Carson Collis hauled in a reception that set up 1st and Goal for the Rebels. Davenport sneaked it in for his 2nd Touchdown of the night giving 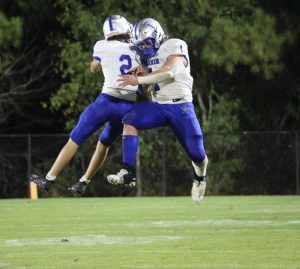 Next Drive for Athens Academy resulted in an Interception by Lawson Sullivan.  Fannin was unable to take advantage of the turnover but a great punt by Jack Kanter pinned the Spartans down to their own 5-yard line with 5 :32 left in the quarter. Athens Academy took over and would pull off a fake punt for a 1st down and advance the ball all the way to the Rebel 38-yard line. Athens Academy would face another 4th down on the drive this time a 4th and 1 from the Rebel 29-yard line. Logan Long, Andrew Waldrep and Brayden Taylor would be in on the tackle and stop the Spartans short of the 1st down for a turnover on downs for Fannin County. Elijah Weaver would take a knee for the Rebels as the horn sounded for the end of the 1st half with Fannin leading 14-7.

Athens Academy would get on the board on a 2-yard touchdown run. However, the extra point try by Athens Academy was no good.  Fannin would lead 14-13 entering the all-important 4th Quarter.

Davenport found Carson Collis for a 1st down and the Rebels were marching in Spartan territory. Another big run by Davenport had the Rebels close to the red zone. A Bryson Holloway run on 1st down put the Rebels into the Red Zone. Corbin Davenport would find the end zone for the 3rd time on the night giving Fannin a 21-13 lead with 10:11 left in the 4th. 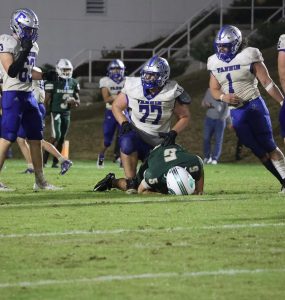 Athens Academy would put together a nice drive into Rebel territory. Senior Logan Long would come up with a tackle for loss on 1st down from the Fannin 22-yard line. Next play, Athens would hit their big tight end for a 1st and goal all the way down to the 5.  A big stop on 1st and goal from Corbin Davenport, Brayden Taylor and Copper Born, a Lawson Sullivan tackle for loss in the backfield on 2nd and Goal, and a Copper Born and Andrew Waldrep stop on 3rd and goal brought up a crucial 4th and goal for Athens Academy.

Athens Academy would attempt a 26-yard field goal after a delay of game penalty in which they were attempting to make the score 21-16. However, The Kicker for Athens Academy slipped up and barely kicked the ball and Lawson Sullivan caught the kick. Sullivan would return the kick 33 yards giving the Rebels all of the momentum with 5:50 left in the 4th. 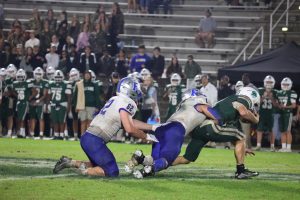 Corbin Davenport would find the endzone again for Fannin making it 28-13 with 3:31 left in the 4th. Next Drive Andrew Waldrep and Case Holloway would sack the QB on 4th down and the Rebels would run out the clock. Final Score Fannin 28 Athens Academy 13 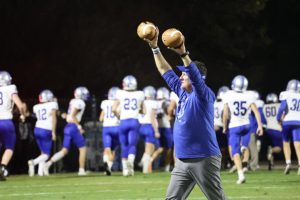 Coach Chad Cheatham giving the Game Ball to the Rebel Fans who made the 2 hour 30-minute drive 228 Mile Round Trip. Fannin had more fans at the game than the home team Athens Academy

Fannin County’s win on Friday Night was their 5th Playoff Win in School History and their 4th Playoff Win since 2020. It was the school’s 1st ever Road Playoff Victory

Callaway. The Rebels are currently listed as 6-point underdogs to the Cavaliers. Callaway is 8-3 on the season and region champs out of region 5.  Callaway defeated Washington 42-20 last Friday. Kickoff will be 7:30pm @ Callaway