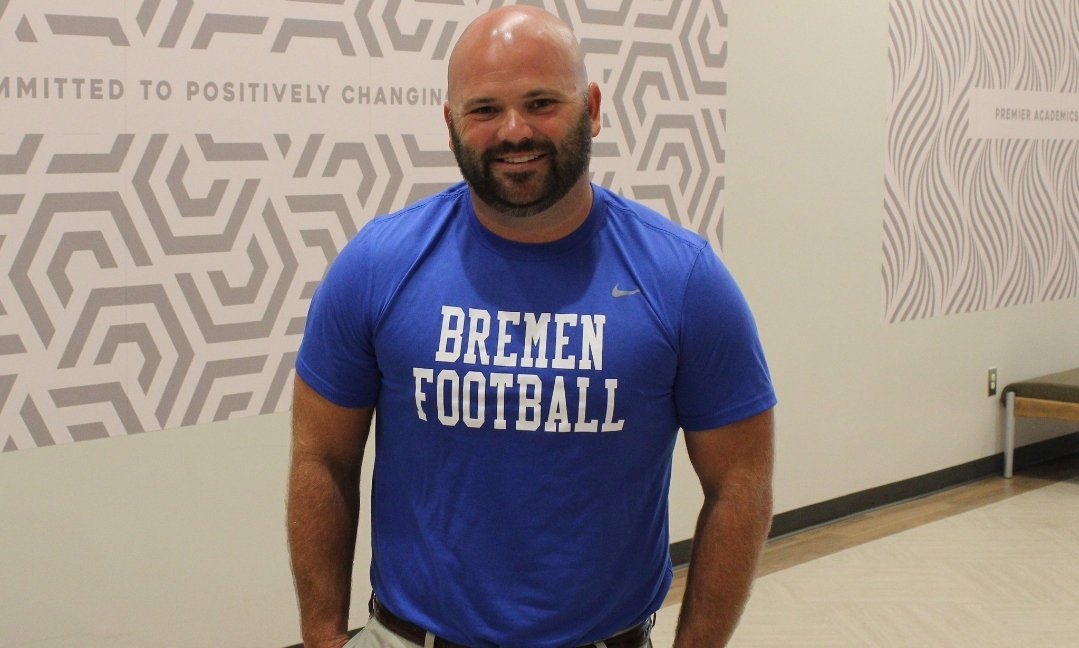 CARROLLTON GA- On Gradick Sports media day, I had the chance to sit down with Bremen Football Head Coach Davis Russell. Coach Russell gave us some insight on the Blue Devils as they prepare for the upcoming season.

When asked about changes to the offense and the offensive line:

“One of the reasons we went to this offense is we got tackles like Evan Brown who are 6’1” or 6’2” that are 200 pounds and start on our basketball team, so they can really run, gap-down-backer and run. Barrett Greenhaw and Doc Pearson who played fullback and tight-end last year, they’re playing tackle, and those guys can run.”

“We got a couple kids in Logan Mann and Watson Hembree, that didn’t play last year that are big guards. Big punching guards.”

“We got a good group of offensive lineman and Sam Robison is leading the charge there. He’s my co-offensive coordinator and offensive line coach. He’s won a State Championship as OL coach with Calhoun and played in this offense, it’s a good group.”

Coach’s thoughts on the Bremen Defense:

“We got a team of corners; I’ve got about 6 corners. They play hard and their good kids to. Cayden Sweatt is really good on defense to, we’re going to play him in spots because he will be running the ball a bunch, but he’s a really good defensive player. Cam O’Neal is a D-lineman that’s another great player. I could name a bunch of them”

“Nobody stands out as far as there’s just one guy better than the other. Just a bunch of blue-collar kids that work their butt off. That’s what we prided ourselves on.”

When asked about last season’s 5-6 finish:

“We hit the reset button in February, people think when you have a bad football season that you need to do more football, we did less. We started focusing on being great teammates, being great people, being great leaders, being great workers, and being un-common. That’s our thing this year, we’re going to be uncommon. We’re going to be real with one another, and this is the most fun summer I’ve ever been a part of.

This team is an ultimate team, and that’s been our focus. That’s what we always wanted at Bremen, Tough hard-nosed kids that get after it and don’t want to let their teammates down. We got away from it at spots and we aren’t going to let that happen again.”

On Cayden Sweatts move to fullback:

We were doing this thing called Devil Games, and at the end of one of the mornings we were running pro shuttles and he just started whipping everybody. He was out running our skill guys.”

Our problem was we didn’t have that big fullback that dotted that flexbone, so what we did was we just put Cayden there. Coach Hanegan and Coach Robison said I think we just got a lot better, and you know Cayden’s happy, he ain’t quit smiling yet.”

Bremen will have a scrimmage at Rockmart August 5th and will open Regular season play on the road against Heard County August 19th.