Home / Board of Commissioners / Community

FANNIN COUNTY, Ga. — The Fannin County Board of Commissioners proclaimed the month of May as Mental Health Awareness Month, with representatives from Fannin County Family Connection in attendance. The board also received an update on the city park agreement recently signed by the board and the Blue Ridge City Council. 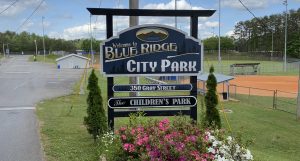 Recreation Director Eddie O’Neal first told the commissioners that an advisory board will hold their first meeting on May 12, 2022. The board will include Blue Ridge City Council members Angie Arp and Christy Kay, Director O’Neal, Fannin County Parks and Recreation Board member Cline Bowers, Leadership Fannin Steering Committee Coordinator Christie Gribble, and Commissioner Johnny Scearce. The newly created board will help oversee the upcoming improvements to the park, now named the Fannin County Recreation Complex at the Blue Ridge City Park. “We’re trying to give everybody in the county and the city an opportunity to have a really nice park,” Commissioner Scearce said.

O’Neal noted that work on the park has already begun. He said the playground equipment will be replaced with ADA compliant equipment by the end of 2022 and the new pool and splash pad facility should be open by the summer of 2024. According to O’Neal, the county will also continue to honor existing contracts between the school system and the city of Blue Ridge, that allows school sports teams to play at the park. 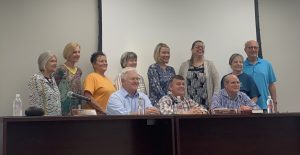 Representatives from Fannin County Family Connection were in attendance at the meeting to see the board proclaim May 2022 as Mental Health Awareness Month. Anna Speessen, Chair of the Mental Health Strategy Team, read the proclamation before it was signed by the commissioners. In part, the proclamation read: “Whereas prevention is an effective way to reduce the burden of mental health conditions, and there is strong research that animal companionship, humor, spirituality, religion, recreation, social connections, and work life balance can help all Americans protect their health and well-being.”

Speessen continued, “Whereas every citizen and community can make a difference in helping end the silence and stigma that for too long has surrounded mental illness and discouraged people from getting help.” Chairman Jamie Hensley thanked the group while signing the proclamation for the second time, saying, “We want to thank y’all for everything that y’all do for us and for this community.”