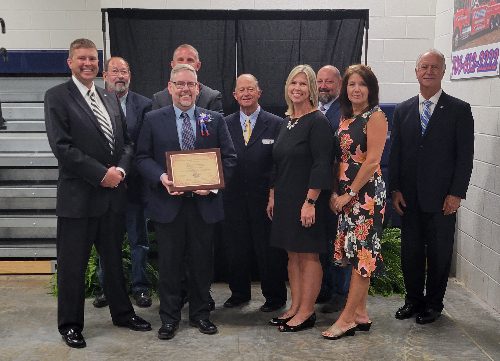 Chris Parker, recipient of Teacher of the Year, with school board and administration

The Teacher of the Year award was brought back this year after the school system was unable to participate in the award last year due to Covid-19.

Shannon Miller, Director of Student Services, explained that the obstacles presented to the school system last year took priority in continuing to provide students with quality education and that all the educators in Fannin County stepped up to the challenge.

“In 2022, I think everyone was teacher of the year,” Miller commented.

Every year a teacher is selected by their peers from each of Fannin County’s five schools.

The following teachers were chosen this year as nominees for Teacher of the Year:

“Few recognitions rise to the level of being chosen by your peers,” Fannin County School Board Member Terry Bramlett spoke of the distinction of having been selected.

The Teacher of the Year is then selected by Pioneer RESA after vetting each of the nominees.

Parker will go on to represent Fannin County in the state level Teacher of the Year.

“Let me say how humbled and honored I am to represent Fannin County,” Parker said after receiving the award.

Parker, who has been with the Fannin County School System for three years, says that from the beginning he was “welcomed with open arms”.

“I have never been in a county before with such a hands-on county office,” Parker spoke of the school system’s administration.

Parker credits his success to the support he receives both at home from his wife and at work from his colleagues, which he refers to as his family away from home.