BLUE RIDGE, Ga – At the previous commission meeting in July, Chairman Jamie Hensley announced he anticipated the millage rate would remain the same as last year’s. Since the county isn’t accepting the state’s rollback rate, it’s viewed as a tax increase.

“Fannin County, a political subdivision of the State of Georgia, has tentatively adopted a millage rate which will require an increase in property taxes by 2.30 percent,” reads the public hearing announcement.

By leaving the millage rate at 3.862, it’s interpreted as an increase of 0.87 mills. In other words, the rollback rate provided by the state would be 3.775 mills.

The public hearing schedule is as follows:

All public hearings will be held on the third floor of the courthouse in the Jury Assembly Room.

For the past few years, Fannin has accepted the rollback rate and continuously kept taxes low in the county.

Previous Post One Earl Johnson advised in the past that at some point in time, Fannin Commissioners would have to raise taxes to keep up with local services.

“It’s nice having the cheapest millage rate in the county, but if it’s not allowing you to equal good services,” said Johnson in 2019, “At some point in time, there’s a Board of Commissioners going to have to evaluate our services versus our millage rate and evaluate accordingly.”

The 2020 board of commissioners agreed the pandemic year wasn’t a good time to raise taxes on the public. They also kept the budget flat for the year. The new board that took office in 2021 issued a budget adjustment to account for cost-of-living increases for the county’s employees.

Fannin’s not the only county dealing with property tax increases. In 2020, Union County raised the county portion of taxes by 17 percent and is currently in the process of determining the new millage rate after a countywide property reassessment.

The next Fannin County Commissioners meeting is on July 27 at 6 p.m. in the Jury Assembly Room. 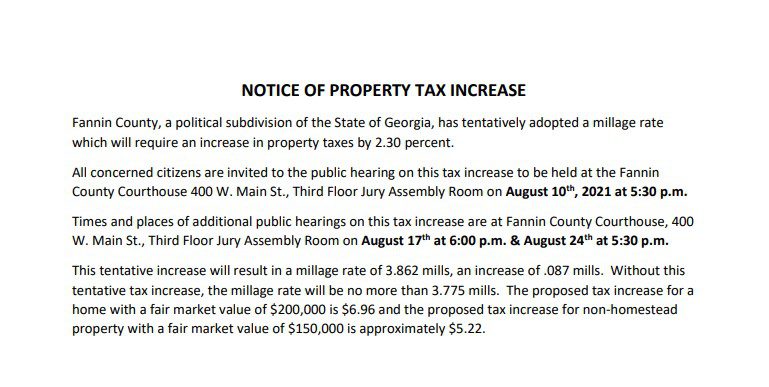