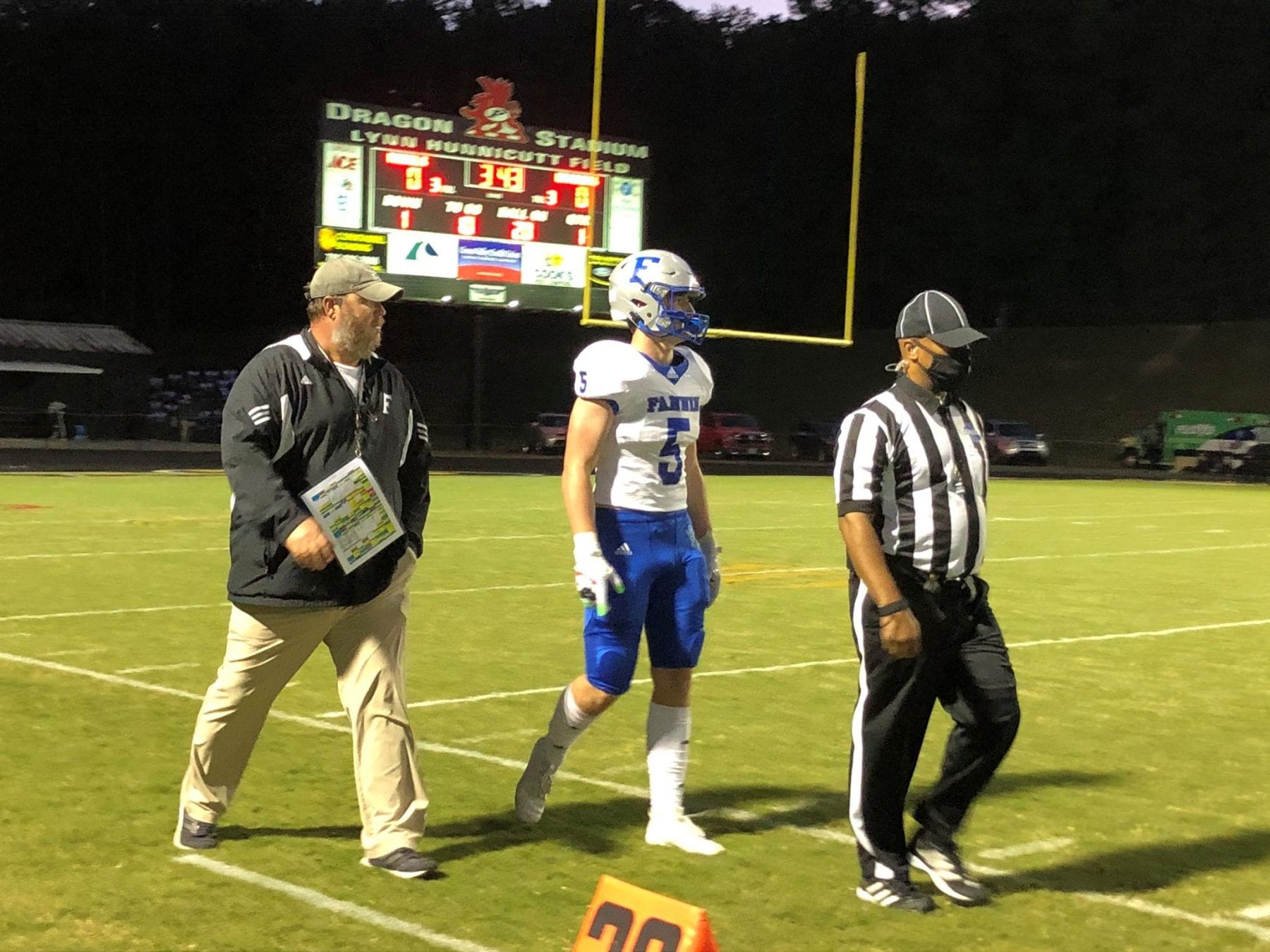 Lindale Georgia and Pepperell High School at Dragon stadium was the site of the highly anticipated region showdown between Region Favorite Pepperell and Fannin County.

When the GHSA announced is reclassification and the Rebels were put in region 7aa, every Rebel Fan had this one circled.

The week was filled with quite the bit of chatter on twitter from Pepperell players and even Dade County Head Football Coach Jeff Potson who was quoted saying “Pepperell by more than you think.”

Side Note: Fannin travels to Dade County on November 20th.

Credit the Rebels of Fannin County, led by 3rd year Head Coach Chad Cheatham for keeping the Rebels off social media and simply focused on taking care of business on the field on Friday night.

The Rebels won the coin toss and elected to receive. Seth Reece was the captain for the Rebels.

Fannin would put together an 8 play 70-yard opening drive that ended with a Seth Reece 1-yard Touchdown.  7-0 Rebels.

The following kickoff, Pepperell’s Marsyan Griffin went 81 yards to the end zone. Pepperell would convert the 2 pt. try and lead 8-7 with 8:09 left in the 1st.

Senior Quarterback and Team Captain Luke Holloway had a night to remember. On the next drive he found Cohutta Hyde for a 53-yard touchdown pass and Hyde ran right past Griffin in coverage to take a 15-8 lead. Luke would find Jalen Ingram on the 2-pt. conversion. 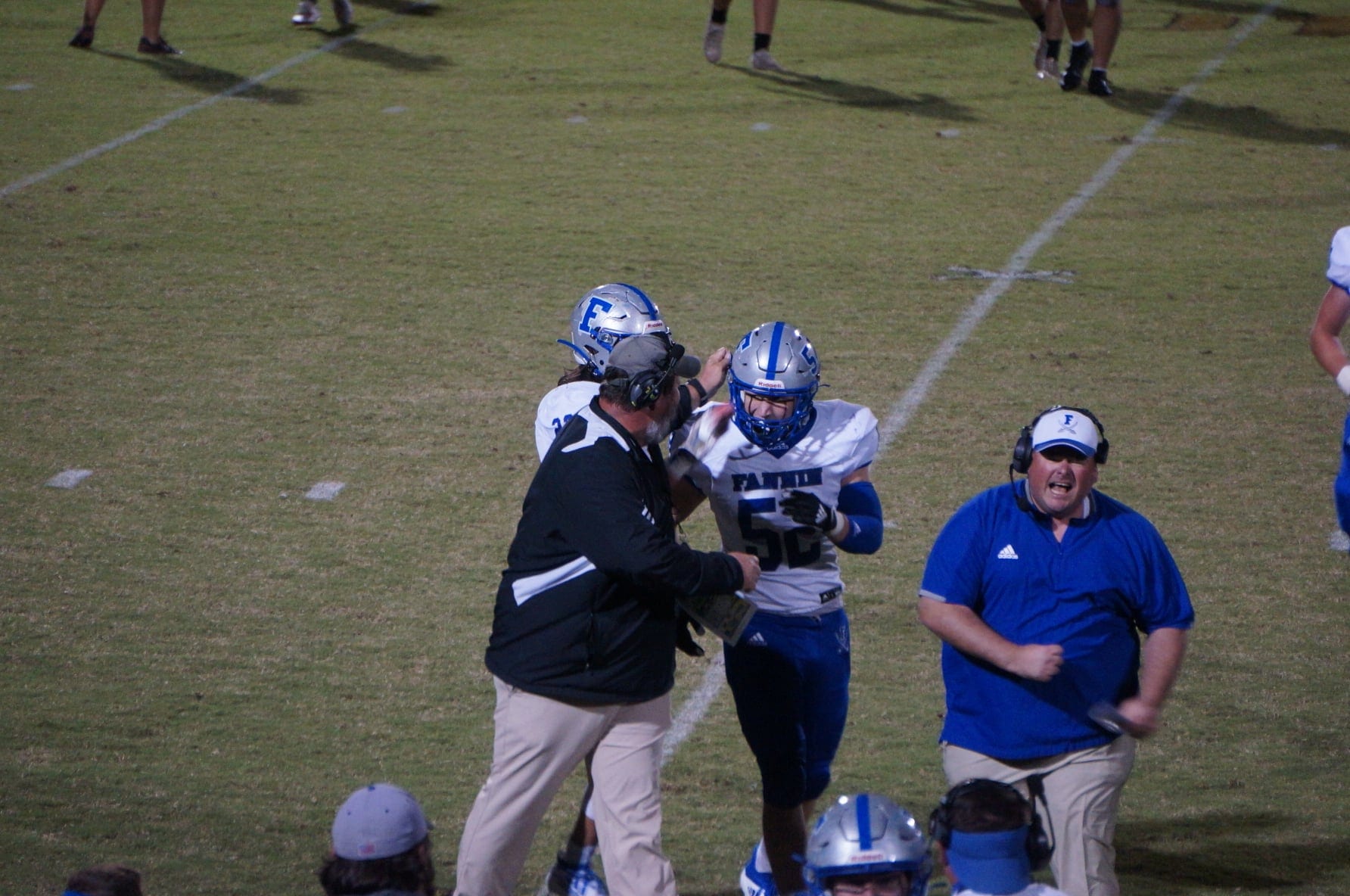 The following possession for Pepperell, Andre Bivens had a near interception on 1st down, Micah Oneal made the stop on 2nd down on Pepperell Running Back DJ Rogers.  Dalton Ross made the stop on 3rd down and on 4th and 1 the Rebel Defense got a big turnover on downs as Cason Owensby, Jake Sands, Andrew Waldrep and Jalen Ingram all broke through and helped make the stop.

Pepperell would put together a nice drive before having to punt. Pepperell had a great punt as they completely flipped field position by having punt go all the way to the Fannin 1-yard line.

Fannin would drive just across midfield before having to punt. Luke Holloway, who also is an all-state punter, had a great punt that put Pepperell starting inside their own 20 YARD LINE

DJ Rogers would break loose for an 81-yard Pepperell Touchdown. Extra point was good bringing the score 15 all with 1:40 left in 2nd quarter.

Fannin would punt back to Pepperell. Pepperell would miss a 40-yard field goal wide left to take us to halftime.

Pepperell would receive the kickoff to start the 2nd half and take over on the 30. Cason Owensby would deliver a nice hit forcing a fumble and Seth Reece would recover. A huge momentum swing for the Rebels.

Caleb Postell would have a nice 15-yard run on the drive down to the Pepperell 5. Luke Holloway would punch it in for touchdown. Fannin would take the lead 22-15 with 7:57 left in the 3rd.

A big 3rd down stop by the Rebels led by Jake Sands and Mason Bundy would force Pepperell to punt.

Fannin would punt right back to Pepperell with a nice punt by Holloway that landed at Pepperell’s own 13.

Andrew Waldrop and Carson Collis would have a nice stop on 2nd down forcing a big 3rd down for Pepperell late in the 3rd quarter. Dalton Ross and Micah Oneal would Sack the Pepperell Quarterback forcing a huge 3 and out for The Rebel Defense. 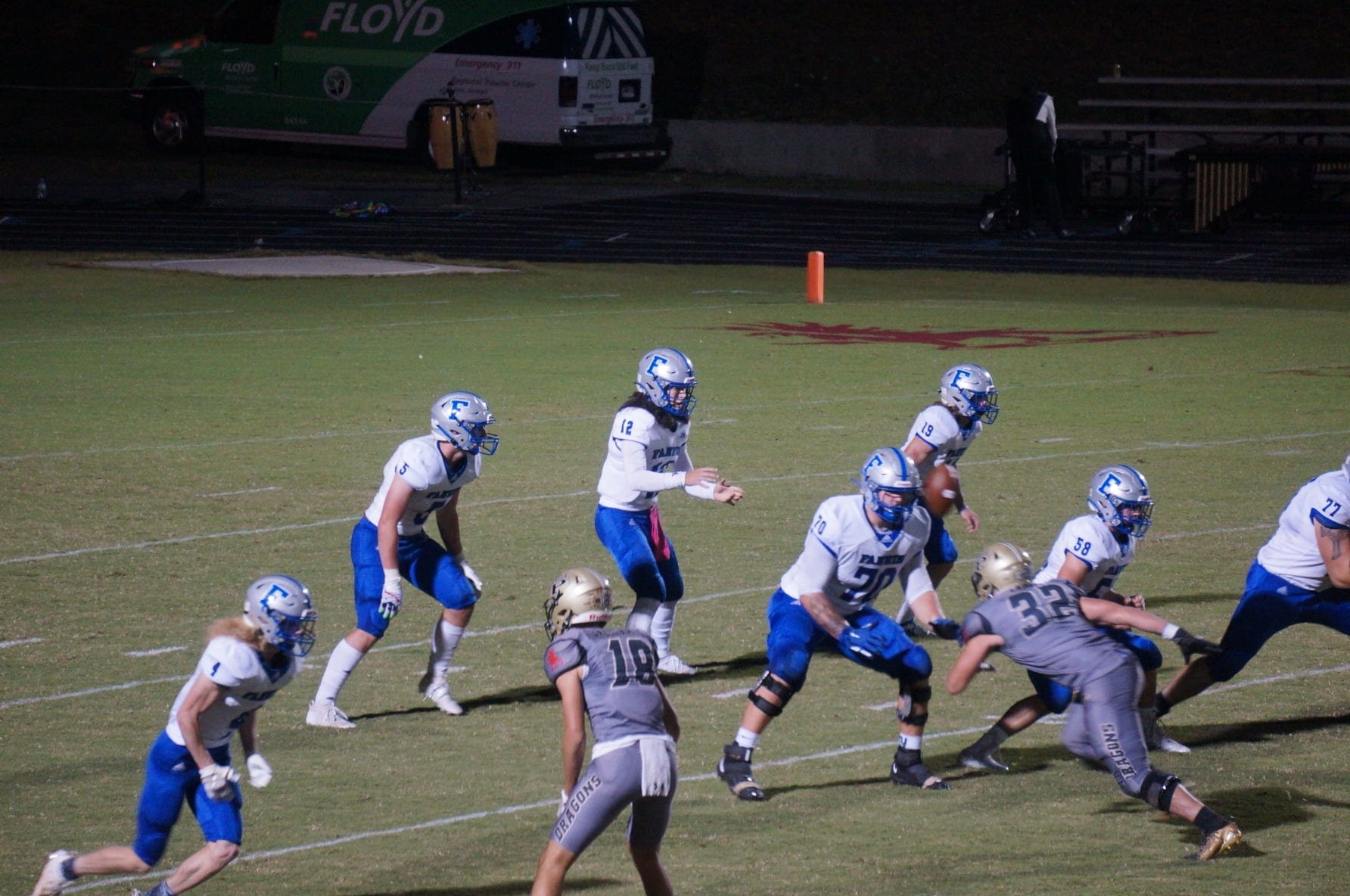 Pepperell would force Fannin to punt on the following possession. Then the Rebel defense stood tall forcing a punt.

Luke Holloway would engineer a great drive with some great runs on the drive. Caleb Postell would have some nice runs on the ground of his own on the drive also that put the Rebels in striking distance. Luke would find Jalen Ingram and then found Andre Bivens to set up 1st and goal for the Rebels. Luke would punch it in from the 5-yard line and the Rebels took a 29-15 lead with 4:50 to go.

Pepperell would answer with another touchdown run by DJ Rogers. That would bring the score 29-23 Fannin with 3:01 left in the ball game.

Next possession for Fannin. Luke Holloway would provide one of the most memorable touchdown runs in recent memory for Fannin County going 64 yards for a touchdown. Score was 36-23 with 1:56 left in the 4th.

Fannin would control rest of clock and win the game 36-23 advancing to 2-0 in Region 7AA.

Luke Holloway was the player of the game for Fannin with 373 Total yards. 231 Yards Rushing and 142 passing and 4 Total Touchdowns. Every member of the Rebel defense stepped up but I want to give a special shoutout to the Fannin Offensive Line. Mason Bundy, Micah Oneal, Dylan Collins, Chris Scott, Rico Arellanes and Brayden Foster all played great.

Fannin County is 5-0 for the 1st time since 1995. A year the Rebels went 12-1 with a loss to Cartersville in the State Quarterfinals. The Rebels win over Pepperell Friday was the 1st in School’s history over Pepperell though the teams haven’t played since 1989.

The Rebels were scheduled to play @ Copper Basin on Friday, but that game is not cancelled due to Covid protocols from Copper Basin.

The Rebels will now look ahead to hosting Model on Friday October 30th. In what could very well decide at the very least a playoff spot and possibly a region championship.