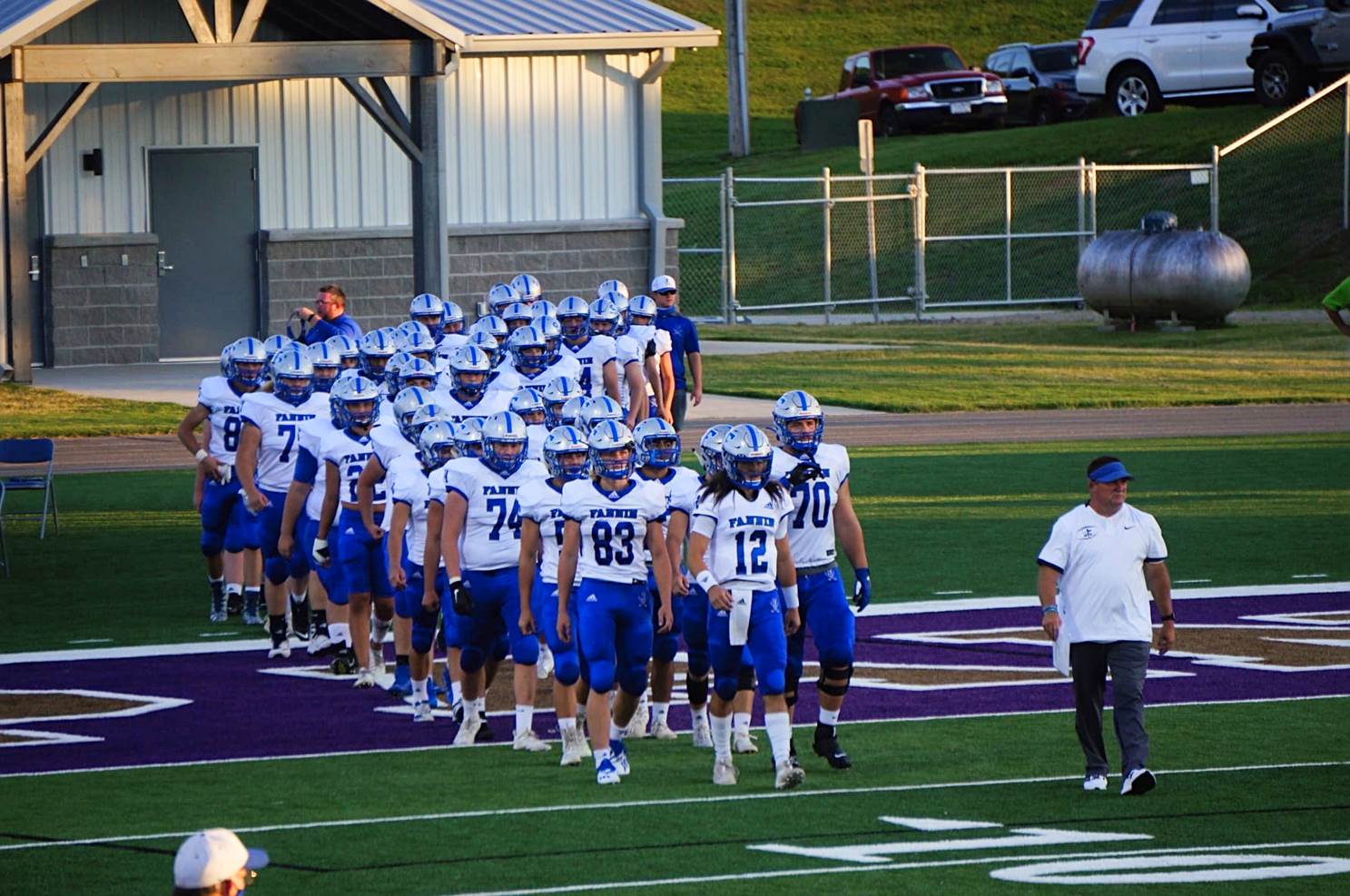 Before we dive into the game, I think it’s important to tell the recent history of this rivalry. Fannin County had not defeated Union County in Blairsville since 2007. In that game, Union held a 19-17 lead at half. Josh Postell, would intercept a pass on a fake punt that would give Fannin the lead and momentum. Fannin never looked back for a 45-19 victory.

2013 was the last year the Rebels defeated Union. To this day, it’s still been one of the best games in the new Rebel stadium. Fannin won the game 43-35. Trevor Stone would connect with current Fannin County Football Assistant Coach Noah ONeal down the sidelines to open up the game for touchdown. Noah also had a pick 6 late in the game to capture the win for Fannin in 2013.

Union County entered the game 10-2 in the last 12 meetings vs Fannin. Brian Allison ( Union Head Coach) does not receive enough credit for the job he has done during his tenure at Union County. As one of the best Coaches in our area, Allison, holds a 117-72 record as Head Coach at Union.

Class is over. Now let’s talk about Friday night.

Mike Colwell Memorial Stadium was the site for the 29th All Time Meeting on Friday between Fannin County and Union County. Union County at the time held a 15-13 record over Fannin. Those meetings do not include meetings with games from West Fannin High and East Fannin High.

Fannin was the visiting team and both the Union and Fannin stands were filled to the brim.

The atmosphere was electric and the scene was special. With so much uncertainty over the past few months just playing on Friday Night was considered a win.

Union County won the toss and deferred to the 2nd half. Fannin would take the opening drive down the field and would score. Senior Quarterback Luke Holloway found Senior Wide Receiver Cohutta Hyde for an 18 yard Touchdown pass. Jack Catner’s extra point would be good and Fannin would lead 7-0 with 6:07 left in 1st. 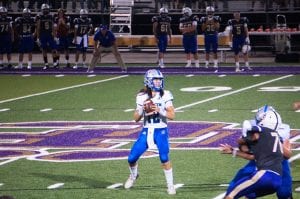 Union County would go 3 and out with big stops on defense by Fannin’s Dalton Ross and Carson Collis.

Union Quarterback, Logan Helcher would have a great punt inside the 20 where Fannin would take over. Dalton Allen, recovered a fumble for a scoop and score as Union was on the board to make it 7-7 with 2:40 left in the 1st.

Fannin County on the following drive would get Jalen Ingram and Jake Sands involved as they both had nice catches through the air by Holloway. Luke Holloway would hit Cohutta Hyde down the sidelines for a 48 yard gain to end the 1st quarter.

First play of the 2nd half, Holloway, would sneak it in the end zone for another touchdown. Score would be 14-7 in favor of Fannin.

Union County would put together a nice drive engineered by Helcher. Jonah Daniel would have a 16 yard run to the Fannin 4 yard line. The Fannin defense came up just short of a goal line stand. Micah ONeal had the stop on 1st down and Cason Owensby and Logan Long would make the stop on 2nd down. Logan Helcher would find the end zone on 3rd & goal and the extra point by Mason McCombs was good to make it 14-14with 2:45 left in the 2nd.

The following drive, Caleb Postell put together some nice runs for Fannin and a nice reception by Andre Bivens were some highlights of the drive. Fannin would have 1st and goal from the 5 but we’re unable to score 6. Sophomore Kicker Jack Catner, however, would add a 21 yard field goal to make it Fannin 17 Union 14.

Union would take over and put together a drive into Rebel territory. Micah ONeal, Logan Long, Jalen Ingram, would make big stops on the drive but none bigger than Andrew Waldrep forcing a fumble on Helcher. Cohutta Hyde would recover.

Fannin would go 3 and out and Union would run 3 plays before the horn buzzed ending the 1st half. Fannin would lead 17-14 at halftime.

Union County’s Mason McCombs would attempt to tie the game but he would miss the field goal as Fannin would still lead 17-14 with 5:23 left in 3rd.

Fannin would give the ball back to Union and Helcher would complete a long pass down the home sidelines and Helcher would punch it in giving Union their 1st lead of the game, 20-17. Union would attempt a 2 pt conversion but Jake Sands would pick the pass off. Union would lead 20-17 with 1:03 left in the 3rd quarter.

Fannin would start the 4th quarter on their own 25 hitting Jalen Ingram for a 1st down. Ingram also added another catch on the drive. The Panthers would Force Fannin to give the ball back with 9:10 left in the 4th.

Fannin would get the ball back. 3rd down and 6 from the 25 yard line Luke Holloway found Andre Bivens for a touchdown to give Fannin the lead 24-20 with 5:49 left in 4th. 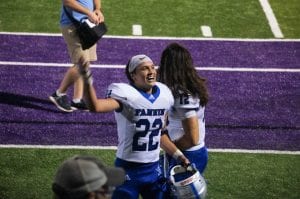 Union County would try to put together a game winning drive of their own. However, Fannin County’s Cason Owensby, had one of the biggest interceptions in recent memory for Fannin.

Fannin would take over and pick up a 1st down. Holloway would wake the final knee and a celebration for the ages took place on the Fannin County Sidelines. Head Coach Chad Cheatham would toss his visor into the stands and Fannin County Recreation Department employee Tim Wooten would come down with the reception. Wooten would give the visor to Coach Cheatham’s wife Katherine. No word yet if the post game visor throws will continue. 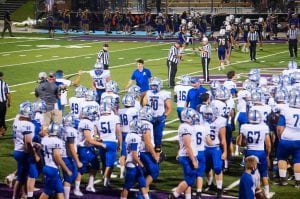 It was very special to see Seniors Micah ONeal and Mason Bundy and others from senior class celebrate with so much excitement and emotion.

Fannin County is now 1-0 on the season after 24-20 victory over Union. They will have another rivalry game this Friday night as they travel to Gilmer to play the Bobcats.

Gilmer County led by 2nd year Head Coach Kevin Saunders, will be coming into the rivalry game 0-1 after a 17-8 defeat by another one their rivals in Pickens County.

Be sure to catch Rebel Wrap Up on Wednesday at 630 live on Team FYN Sports Facebook with Host Tim Towe. Head Coach Chad Cheatham and Rebel players will join the show. 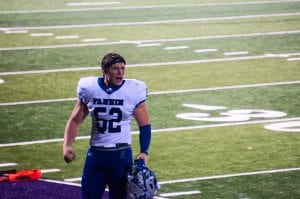