Blue Ridge, Ga. – Demonstrations are continuing to be held across the nation, by people wanting their voices to be heard on issues of equality. Organizers in Blue Ridge took a different approach as they hoped to be heard through the silence of art.

A fence was set up in the Blue Ridge City Park and adorned with original art pieces expressing discouragement about unequal treatment of individuals in our society and hope for unity to prevail. The Silent Rally for Respect, Peace, and an Equitable Future for All was the brainchild of Fannin County native Jessica Abernathy.

Abernathy had recently attended the rally that took place in Ellijay, Ga. and got inspiration for Blue Ridge’s event when she realized, “I wasn’t alone”. 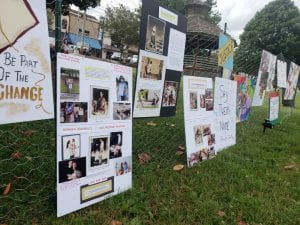 Having friends in a variety of communities, Abernathy was compelled to bring her message and the message of many others to Blue Ridge.

“Being that we have a big art community here, this seemed like the best way to do it,” Abernathy spoke of the unique approach to the Blue Ridge rally and pointed out that this form of expression alleviates the concerns surrounding the ongoing Covid-19 pandemic allowing people to social distance.

Also in place, was an area for visitors to write their thoughts on the current events that are taking place in our nation and around the world. Everyone was invited to share their opinions via pen and paper. These messages will be sealed in a time capsule until 2030.

According to Abernathy, local historian Kathy Thompson came up with the idea for the time capsule and will be overseeing its placement, to be determined, until 2030: “It’s to seal this moment in time. It seems like a very impactful moment.”

Some showed up to support differing views than those portrayed on the rally’s art wall.

“I try to show my support every day. I’m a retired police officer and the police departments are getting a really bad wrap right now,” Henderson said while sitting by his Back the Blue sign, “I agree there are some bad police officers, but there’s a whole lot of good ones. We shouldn’t condemn an entire profession based on a couple of bad people.”

Henderson also displayed a sign reading “Unborn Lives Matter” and this is a belief that he holds very dear. 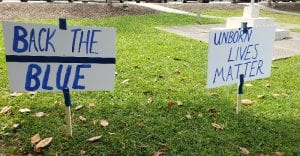 “Everybody’s been talking about Black Lives Matter. Yes they do. They certainly do. Brown lives matter, White lives matter, Asian lives matter, all lives matter,” Henderson spoke on the issue that he says he prays about a lot, “But what’s more important to me, and there’s not much I can do but be vocal about it, is that unborn lives matter.”

Henderson says that he wasn’t present to counter protest but rather to show support of issues meaningful to him: “I am here as a citizen enjoying a day in the park, drinking my water and I’ve got a couple of signs saying how I feel.”

Abernathy, the event’s organizer said that Henderson and others “not necessarily sharing her views” had been respectful of her demonstration and that she had met no real opposition from the community while organizing and holding the event.

“Love your neighbor,” Abernathy shared the message that she hopes the event will bring awareness to, “Be empathetic to the situation at hand. We just want peace for everybody. We don’t want anyone to have to be afraid.”