BLUE RIDGE, Ga – Commissioners raised questions about the status of fire hydrants within the county. Fire Chief Larry Thomas revealed that several are still out of service months after broaching the subject with city mayors.

Post Two Glenn Patterson asked about the hydrants, “Are we moving forward on that are far as the ones that need to be fixed?”

Thomas affirmed that reports of out of service hydrants are down, but the fire department hasn’t checked every fireplug this year. 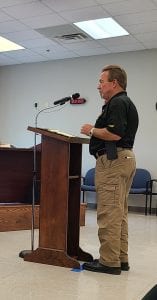 “Who’s keeping up with where they’re out of service [and] when they’re put back in service?” asked Post One Earl Johnson.

Thomas replied that the cities restore hydrants and should keep up with the functionality. The fire chief has added that he asked for the cities to update him on any completed repairs. Otherwise, firefighters might not know a hydrant works or not until they see the yellow tape and bag around it.

Johnson believed the fire department could execute a better plan for recording fireplug repairs. For example, the “fire department checked hydrant A on this date, issued notice to the city, and the hydrant put back in service.”

Officials could revisit the record later and identify which fireplugs still need repairing.

“For my remaining six months here, I want to hear how we’re progressing, not what we’re doing, but how are we progressing to get this number back because it’s a concern of everyone, who pays insurance in this county,” stated Johnson. “If we’re just going around testing hydrants, and ‘well we tried that hydrant that day we were trying to put that fire out, and it didn’t work.’ I think we need to have a baseline of the ones we’ve checked.”

Thomas emailed the cities about out of service hydrants, and the fire department continued to find improperly addressed fireplugs. He estimated around 1,000 hydrants exist in Fannin County, but he doesn’t have the exact, current, number of hydrants out of service.

Thomas confirmed the fire department does have a list of the damaged hydrants. However, he hasn’t heard back from the cities about the current functionality of the fireplugs.

“Really you don’t know if we’re improving that much or not?” commented Patterson.

Ultimately, cities must fix damaged or out of service hydrants. 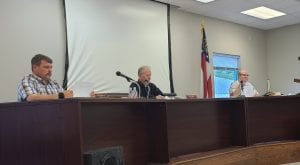 “I think the fire department and the county need to have that information, not necessarily as leverage, but by gosh, we need to know if they’re helping to fix them or not… If it’s their lines, it’s their responsibility,” Johnson stated.

Until now, no one took the initiative to locate all the fire hydrants in Fannin County. The county should know how long fire plugs/hydrants were out of service and who to speak with on the issue. According to Johnson, the fire department and county need to maintain good records and take action to motivate the cities.

“This could cost a life too if we’re not handling it,” added Chairman Stan Helton. “What needs to be done for us to put this on the front burner with all the other water systems?”

Thomas acknowledged maps exist of the water systems that should detail hydrant locations. He also stated that he could start talking to cities’ mayors and water authority officials again.

Helton asked Thomas to develop a plan on how to handle the problem and present it at the next county commission meeting.

“It’s everybody’s problem, but we’re the ones that seem to be ultimately responsible for the biggest part of it,” finished Helton.

During the ISO update, Thomas assured commissioners the rating should go back down once the Fannin Fire Department services complete a reexamination. However, the new evaluation won’t take place in July, but November of 2020.

“I talked with the lady that I had most of the conversations with a year and a half ago. She said we would have to go by the effective day. The July date on the letter didn’t actually say that one year, “explained Thomas. “We had to be in place with that effective date from November 2019 to November 2020 until we get them back in to actually do that one-year process.”