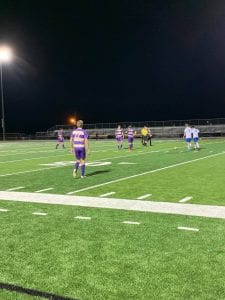 Last night, Feb. 25, the Fannin Co. Rebels (2-0-1, Region 7-3A) traveled to Union Co. to take on the  Panthers (3-1, 0-0 Region 8-AA). The Rebels had just come from a 6-0 victory against Adairsville and looked to continue the trend against the Panthers. Union Co. had just come from a 4-3 victory of their own against Riverside Military Academy and hoped to continue their winning streak as well. After a game of endless hustle, it ended with Fannin Co. walking away with a 2-1 victory.

Zach Jackson was the one to put Union Co. on the board as he scored a goal to tie the game 1-1. As the ball was being thrown in bounds, Tristian Cheves made an amazing kick in mid-air behind him to give Fannin Co. a 2-1 lead to end the game with a victory.

When asking Fannin Co. senior Cheves about his team’s performance for the night he stated, “Tonight we played the best as a team I have ever seen in Fannin County Soccer. There was real possession soccer from the boys. The intensity from everyone was great.” Union Co. Panther Marcus Forrester shared this quote with Team FYN Sports, “One bad game doesn’t define who you are as a player.”

Catch the Fannin Co. Rebels next game on Friday as they take on East Hall at home at 7:30 p.m. Catch the Union Co. Panthers next game Friday at 7:30 as they travel to Putnam Co.